One of our local opposition parties, led by Diego García, has sent out a note to the effect that the town hall of Mojácar in general and the mayoress in particular don’t like the Europeans much. According to Diego (who presumably does), ‘She has shown on more than one occasion a particular hostility towards this important part of the community' (Costa Almeria News). In fact, it’s fair to say that none of the town halls of Mojácar since democracy began with the passing of Franco in 1975 have particularly liked the ingleses. You know, this isn’t the cultural capital of Spain. I don’t suppose they particularly dislike us either. We just are.
Diego says that a lot of young Europeans are leaving and – presumably – going back to England or wherever they come from (I know, Spaniards are Europeans too – please don’t try and complicate things), but this is not because of the lack of interest shown us by the local authorities. Now, the national ones, they obviously don’t like us – either trying to knock down or confiscate our homes, or take away our residence cards (that’s my new 21st century European ID documents in the photograph that I'm meant to carry at all times - including the rare occasions I'm allowed to vote - as recommended by Pérez Rubalcaba, the Minister of the Interior). 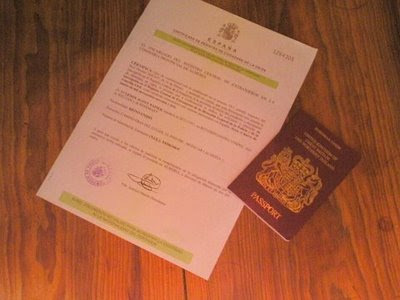 But locally… weeell. So, we keep the place alive. We’re like animated piggy-banks. After forty years of living pretty much exclusively from funds brought in from outside, by rich retired people who buy a house and bring in their monthly pension or other income, who buy a car locally, buy washing machines, stay in the nation’s Parador hotels, create jobs for gardeners and maids: who eat out, drink out and shop, who keep those small towns of the province from switching out the last light and so on, still our local ‘hosts’ don’t seem, in Diego’s words, ‘to like us much’.
In Mojácar, where there are more Britons (leave alone Europeans or foreigners) than Mojaqueros, we still don’t have anyone in the town hall who can speak English or (gasp!) is English – born here or not. We aren’t invited to the romerias or the ski-trips to Andorra. We don’t have any say in what’s going on. Government funding or our tax money is squandered, misspent or, at best, pretty poorly managed.
There are no streets or buildings named after us. We are like the Visigoths. If we all disappeared tomorrow, then there would be no proof of our having been here at all after all the gardens had died from lack of watering. Well, everyone would be broke again, of course, but not much else to show.
So, are we leaving in droves as Diego suggests? Not particularly. The pound has fallen from one euro fifty to about one euro five, so our pensions are down and perhaps we save by not going out to the restaurants and bars (where these days, the alcohol cops are waiting for us anyway). It could be, with business down (the Spaniards – perhaps understandably – don’t go to English restaurants if they can avoid it), some of us must downsize, sell up or leave. Then again, some of us are really old and maybe lonely and, who knows, perhaps some family members in Britain want us back.
But, new people arrive. Especially those that don’t watch the British TV and the ‘Homes from Hell’ franchise. In exchange for bringing our dosh and being left more-or-less in peace, or being ignored if you prefer, we would be able to live pretty well here – if it wasn’t for the power-crazed regional and national politicians who want to knock down our homes, confiscate, expropriate, tax, fine, arrest or otherwise vex the foreigners for reasons only known to themselves.
They aren’t helping our mayoress and her town hall much, now are they?
Posted by Lenox at 2:54 PM

"In Mojácar, where there are more Britons (leave alone Europeans or foreigners) than Mojaqueros, we still don’t have anyone in the town hall who can speak English or (gasp!) is English – born here or not."

Wouldn't have anything to do with not exercising the right to vote, would it?

Yes there is a problem with legitimate residents not registering on the Padron, for whatever illogical reason, and therefore not able to vote. However, there is also a huge number of non-resident property (holiday home) owners who provide Mojacar Ayuntamiento with a sizeable income from their IBI Urbana contributions and who, understandably, might expect some,albeit miniscule,level of service in return! Que pasa?

What's happened is that the local plan of getting all the benefit without having to lift a finger worked perfectly well. What incentive is there for them to change it? If it ain't broke...