There's a ménagerie of animals chez nous, including a number of birdies, a rather useful egg-producing chicken, pairs of dogs, cats and horses and, finally, a rabbit called Bungus. Bungus is getting on in age, being in bunny years up there with Methuselah, numbering eight hundred, eighty and eight. About ten in real life. He lives in a cage with every mod con, including a view. Rabbits here can't touch the floor, or straw, we know from long and bitter experience, as they will catch myxomatosis and die in some agony. So, Bungus lives in the nearest thing to a bubble, in this case, a cage on a table outside.
His teeth have gone from his years of crunching bunny food and he now likes to gum a little lettuce in the afternoons and to snack rather heavily on bread in the mornings. Bread from that fine bakery Mr Bimbo. He gets two slices. This produces a certain amount of waste, with helps explain our ant problem.
Bungus came from Pamplona. We were there, many years ago, and we needed a hospital companion to help out when I was unable to offer my bedside presence between several horrible operations being suffered by my wife. 'I don't mind their attentions,' she said, 'as long as I can have something furry to hold'. Oddly, a teddy bear wouldn't do. The hospital agreed to a conejo, as long as it stayed in its cage.
We cleaned his cage yesterday, filling a garbage bag with junk, and replaced the flooring with a number of newspapers carefully collected the day before. Bungus is a conservative rabbit, and doesn't like change so it took a while before he allowed us to reach in and tickle him.
Now, he's watching the gate, chewing quietly on a favourite nut. He'll thump his back leg if he needs anything.

We were just driving out of our track to turn onto the road towards the village. A car stopped in front of us broadside on and an old man got out. He looked like he came from the North.

-Disculpe, ¿Dónde está la playa?. As usual, when a Spaniard asks someone who is evidently a foreigner - I'm tall, blond and burnt red, he follows up his question with a surprised nod. I've talked to an extranjero!
Well, I answered, it's down there, back the way you came. But the only other turn, he said, takes you up to the village.
No, go down to the gasolinera and turn towards the beach there at the roundabout. There's a sign that says 'Carboneras'.
He looked like he didn't believe me. Well, this is Mojácar I said.
The turnoff to the beach at the gas station is headed up by a roundabout, and the beach itself is behind a last hill, so it is easy enough for a visitor to get confused. There's no sign.
Our local businessmen meet sometimes for a red-prawn and pink wine lunch at the Parador, those that can tear themselves away from their their markets selling Chinese nick-knacks and provocatively decorated tee shirts, and they argue contentedly about their small-holdings. The main business of the pueblo, putting a family member into the town hall and ushering in a rubber-stamp absolute majority, was concluded shortly before the last elections. Now, they worry about smaller things - who is going on the trip to Andorra (we are twinned with a city there for no discernible reason beyond allowing up easy access to our 'offshore' bank accounts by coach); how to keep the rents high when no one can afford to pay them; how to avoid paying local taxes and how to get so-and-so's son into the football team. A few uneasy jokes are made about dominoes - the noise of them irritates the mayoress, who is trying to ban noisy and drunken nights on our beaches. Small things.
'Mojácar Tourism, the promotion of', is left to others. If they want to promote our hotels, built on a stretch of land running towards Garrucha, and away from all our commerce, well, that's fine. No one goes there, there's nothing except cheap package, full-board tourists, either foreign or national, wandering in a daze between their remarkably ugly hotels - tourist factories - and an abandoned beach in front. There's a camel ride for the adventurous.
One thing about life that both the local and the foreign population know, package tourism is a waste of space, and we have some space to waste. Up on the Garrucha Road. 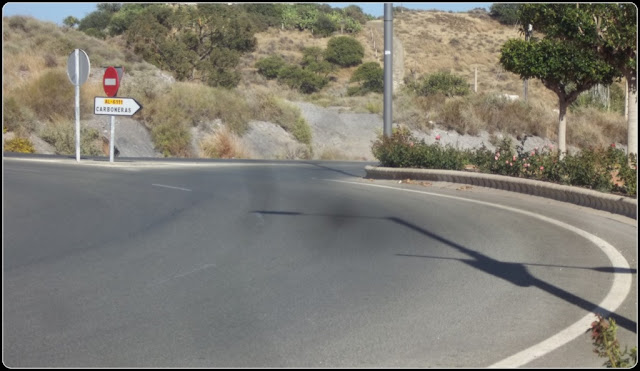 Our own beaches, sign-lit at the roundabout with the 'Carboneras' sign, are much more fun. There is a number of eccentric beach-bars which have flourished since Mojácar's days of Bohemia in the sixties and seventies (frustratingly still run mainly by forasteros) and a collection of good restaurants, bars, ice cream places and an excellent Government-run Parador. The restaurants, despite the tourist department's insistence on the contrary, do not prepare ajo colorao, migas, pelotas and other rare and obscure eighteenth-century fare, for the twin reasons that there is no demand for them and, the preparation for these dishes is rarely taught in international cooking schools. But then, we aren't going to promote the forasteros and their businesses here, even if most of the budget comes from outside.
So, an idea which will cost nothing, but might improve visitor rates. The Mojácar beach is treated by the local government as just another area, a bit like 'La Fuente' or 'El Casco Viejo' or 'Las Huertas'. It is, in fact, rather more. It holds about 90% of local business and, including the urbanisations stretching behind into the hills, has about 90% of our entire local population.
Give it an identity. Call it 'Mojácar Costa' as if it existed as a resort. Put up a sign up outside the Gas Station.