Sober, for a Month

'Being sober on a bus is, like, totally different than being drunk on a bus'.
Ozzy Osbourne

I haven't had a drink since last September, well, this September if you want to split hairs. Because you see, it's the ghastly month of Sober October once again. I am sitting here wondering if a cerveza sin alcohol counts against the rule of zero booze! It may do, so I stick instead to a soft lemony drink from Lidl that I call Sucedáneo de Acuarius.

In its favour, it's cheap.

There's a jar of smoked herring in the fridge, the rollmops that the Norwegians do so well. I found it in the local shop yesterday and brought it home. But how do you have a rollmop-session without vodka? Huh?  A glass of goat's milk just doesn't cut it.

Sober October is an excuse to give the liver a rest. I once managed a whole year off the booze, following an attack of jaundice in Guatemala. The local curandero told me to keep away from the grog if I didn't want to keel over, so there it was. In those days, I could always smoke weed to keep me going, but I gave that up, along with terbaccy, much to the relief of my tubes, these many years ago.

A WhatsApp friend has sent me an article which says that,despite the assurances of Spain's best and brightest advertising executives, booze - even in small quantities - is bad for you. Taking a glass of wine with your pork chop will not help your heart manage to keep the beat. But, can you cook with wine, does that count? How about a custard trifle with a spot of sherry in the jelly? No? I thought not. Not that I intend to stay on the wagon a moment past Halloween. I have a hankering for a real beer or two. 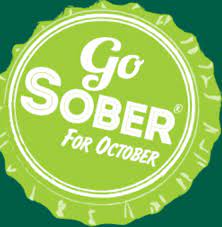 My parents, along with most of the foreign population of Mojácar back in the 'early days' (before it became bourgeois), were heavy drinkers - brandy for breakfast types. They all died young: inebriated and cheerful, and leaving a sizable bar bill between them. This experience kept me generally wary of the hard stuff, and I rarely drink anything strong (rollmops and vodka excepted).

Perhaps the new campaigns on the TV for low-alcohol whisky and gin are aimed at people like me. Have you seen them? Drink Beefeater 20%, it'll make you feel good. The advert is legal because - apparently - there's a strength limit on advertising booze. Of course, the advert is to persuade people to drink the proper stuff, not the gnat's-piss version. It's a bit like non-alcoholic beer - what's the fun in that?

I have a count-down next to the bed. Every day I cross off another number on the calendar, working my way slowly down. Will I have lost any weight after a month on the soda-pop? I shall let you know.

Somebody commented on this elsewhere:  'Interesting, although I always go by the mantra "if you give up booze, it doesn't make you live longer, it just seems like it"'