Mojacar, the Foreigners and an Old Article 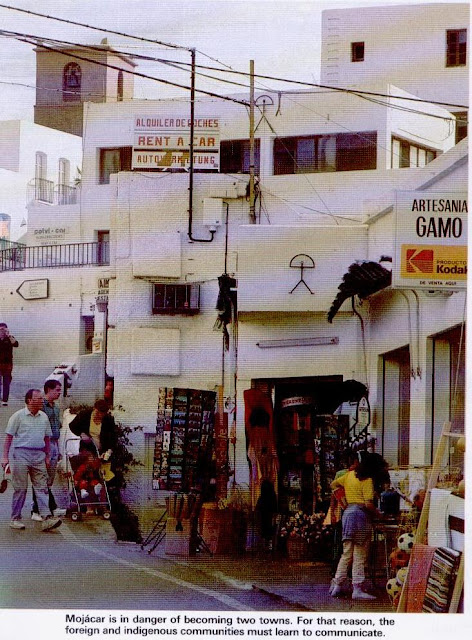 The photo comes from one of those hopeful Spanish magazines that circulated in the eighties, magazines in English but firmly controlled by Spanish writers and editors. After all, who knows more about the expats than the experts? The mag was called Mediterranean Magazine and was sold at 300 Ptas, a sort of journeyman's version of Lookout.
Issue Nº 2 appeared in June 1987 and it ran an article about Mojácar titled: 'Mojácar, from conflict to dialogue, by Juan de Dios Mellado. The beautiful town of Mojácar has gone through hard times. Several controversial issues led the foreign residents to openly confront the municipal authorities, but a dialogue has now been reached'.
Juan, by the way, remains an expert on tourism and is featured in an article in La Opinion de Málaga recently on the publication of his book, 'Los Años Dorados de la Costa del Sol'.
Juan Morales was the mayor in those days (champion of the first moción de censura in Mojácar's turbulent political history). On the foreigners' discontent with the Town Hall's plans he says: 'Maybe at first there were communication problems on our part', he admitted, 'but it wasn't our fault. A lot of these resident foreigners live off to themselves. When we've called them to meetings, they haven't bothered showing up'. The two issues of the time were the construction of a Paseo Marítimo (now half finished and looking remarkably good, but with the new powers of the ecologists, it's unlikelt that it will ever be completed) and the so-called ring-road through the urbanisations on the beach which was, at the time, planned to take heavier traffic, particularly Carboneras industrial trucks, through the area quickly to connect with the future motorway to Cartagena. This as we know, has been successfully stymied by the local residents now for over 25 years.
The article continues with a hopeful note: 'Juan Morales greets foreigners who have lived in Mojácar for years: 'It's possible that now, with the foreign property-owners association, we'll be able to hold regular meetings to deal with problems that might affect them directly', he says. 'Up until now, that hasn't been possible. They live isolated lives. Whereas it's not true that there's real conflict, it's also true that more dialogue and interchange will be good for us all''.
Here's a quote from me (as editor of The Entertainer): 'It's not easy to break down the lack of communication and the resistance to dialogue. Both sides are at fault. The Spanish administration doesn't believe in the role that residential tourism has to play, and the foreigners prefer to keep to themselves in what is little more than foreign ghettos'.
A year later, with Bartolome Flores in power, things hit a new low as the mayor was persuaded to demolish the old fountain and its surrounds (down at the foot of the village) for a new modern, marbled magnificence designed by a scion of the new Junta de Andalucía. I remember a sign held by an indignant Brit which caustically read '90,000 pounds to wash my knickers' (a reference to the old tradition of washing ones' clothes in the fuente). The following demonstration up in the Plaza Nueva turned into a riot, with an arrest and several broken heads. It also proved the downfall of Charles Baxter, hitherto fêted by the locals as a TV personality. A mojaquero said afterwards - it's not that we don't agree with the foreigners about the fuente, it's just that we don't think they have the right to say anything...'.

Have things changed much in a quarter century? In many Costa towns, there are Foreign Departments run by the Town Hall (employing real-life, gosh-for-goodness foreigners!) such as (and just on the Costa del Sol) in Estepona, Mijas, Marbella, Nerja, Fuengirola, Competa, Benalmádena, Coín, Frigiliana, Manilva, Monda, Benahavís... and many towns celebrate Foreigner, or Europe Day with a fiesta, after all that's where the money all came from! (Día de Europa, by the way, is this Thursday 9th May). Mojácar, though, remains defiant. There are now more forasteros than mojaqueros on the padrón, but the massive number of town hall employees shows a very different picture, where with the one exception of Leslie (lost and ignored in the Municipal Gallery), everyone else is locally born and often a visibly keen voter of the current corporation. There's not much integration or even participation allowed from the marginalised foreign inhabitants of Mojácar. There's no longer a 'Foreign Property-owners Association' (there's a very good one in Albox, the AUAN), but Mojácar does have a PSOE-controlled business association with some foreign participation and a German president and there are a couple of minor foreign-dominated political parties, the MPSM and the CE.
So, has anything changed in 25 years and will Mojácar be, for the first time ever, celebrating this Thursday's Día de Europa?. No, actually!
Posted by Lenox at 11:51 AM No comments: