The empty spaces in Andalucía, the bits between the concrete, are under threat: a resource that it is apparently now the time to cash in on.
From the national press we read that the President of Andalucía has approved an urban reform that allows one to build anywhere where it is not expressly prohibited.  This of course is the reverse of the old rule that prevented building on rural undeveloped land and on specially protected land unless it was expressly included in an urban plan. In all, 21 laws and six decrees have been amended with the consternation of the opposition parties within the regional parliament. Already, three appeals to the Constitutional Court have been brought, and eighty organizations have filed a joint complaint with the Public Ombudsman, while, say the newspapers, the decree has sparked outrage from environmentalists everywhere.
It is nevertheless the case that the laws needed amending (we remember the ‘300,000 illegal houses across Andalucía’), but perhaps this U-turn is a trifle more than we had bargained for. Will the ghastly Hotel Algarrobico in Carboneras be legalised (and can it be repaired after a dozen years of abandon)?
What news of the hitherto cancelled Ronda Los Merinos golf project or the Valdevaqueros Tarifa project?
The law in question is called the LISTA, which breaks down as the Law of the Sustainability of the Territory of Andalucía. It is designed to replace the LOUA, which, as Maura Hillen, the ex-president of the home owners’ group AUAN recalls, was ‘…a set of regulations that, for the last 18 years, has placed a stranglehold on development in Andalucía with its urban-centric philosophy and a torturous planning approvals process that failed to differentiate between a village in the Valle of Almanzora and the city of Seville’.
The LOUA had ruled that homes could not be built on rural ground, unless they were to be used for farming purposes. Furthermore, municipalities could grow by not more than 4% in every eight years. This meant that a village of fifty houses could only build two more every eight years. And, by chance, the mayor’s brother was a builder.
So, you see, when the foreigner turned up with a suitcase of cash, we went ahead and built an extra house, well, converted it from an old corral really, just down past the cemetery and not far from Paco’s Bar.
For Goodness sake, of course they built. There’s not much money in goats these days…
The small villages were (and still are) dying, and an injection of new residents, especially those who were retired and would bring business to the local bar, shop and town hall exchequer, could only be a good thing. If there were issues, the village might need the help of a good (if crooked) lawyer, but not an environmentalist – a city creature with a romantic and wildly inaccurate view of the lives of the country-folk. 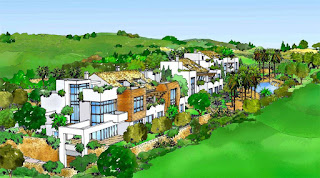 When Helen and Len Prior had their home bulldozed flat in 2008 outside Vera in Almería (the other homes in that immediate neighbourhood survived unscathed), it was neither in a particular beauty-spot, nor was it in a flood-plain. It was at least five kilometres from the beach as the crow flies and it wasn’t on the route of the AVE or a motorway. It also wasn’t in a Natural Park, of which, at 2.8 million hectares, 30.5% of the entire region, Andalucía is suitably blessed.
Where it was odd of the Junta de Andalucía to knock-down that particular house (which, one recalls, was owned by a foreigner),  a nearby urbanisation on the beach called Puerto Rey, which has several apartments owned by ex-ministers from earlier democratic governments of Spain, regularly floods with some inundations as much as three metres deep. A British woman called Diane Dudas drowned in Puerto Rey in 2012 in such a flood. Yet, the urbanisation has never been put at risk by meddlesome busybodies from Seville…
The ecologists (who never seem to mind about the 75,000 hectares of plastic farms – real figures – that do little to improve the Almerian landscape and subsoil) do have a point about layering the whole of the Mediterranean coast in concrete. The poor villages of the interior might need to survive with some help from outside, but the wealthy coastal resorts are looking at expanding into their remaining fields, salt-flats and coves for an entirely different reason:  profit.
The media talks of new schemes going ahead, with one headline saying ‘The Andalusian coast heats up with new urban projects’. These include, ‘hotels, golf courses and urbanisations from Chiclana to the Cabo de Gata, and not forgetting Marbella’.  The same paper, ‘El Mundo’, admits in another leader that ‘The Andalusian government is relying on construction to alleviate the huge losses in tourist income due to the pandemic’.
Making a profit is an underlying philosophy of conservatism, so it comes as no surprise that the Junta de Andalucía, reborn last year (after four decades of corrupt socialism) as a jewel in the PP’s crown, would want to put a resource to good use. Will the profits be re-ploughed into the local economy or find their way offshore? Well, that’s the subject for another day.