The Lost Art of Hay Surfing

Every farm in southern Spain has something called an 'era' which is a flat dirt circle, I think called a threshing circle in English, where the hay would be put after being cut with a scythe. A wooden board with rows of knife-like wheels underneath was pulled by a donkey and driven with long-reins by the farmer. Weight must be applied to the board in order to cut the hay, hence the children. There are actually several different boards with different types of knifed wheels for each phase of cutting. It was a very exciting time for the children when the farmer called them to come and sit on the board while he went round and round. It takes several days to cut the hay into small pieces and release the grain from the stalk. It is a sticky job, in the heat you get covered in pieces of hay and it is a bit like a ride at an amusement park, bumping up and down it is a rough ride especially when the hay is in the centre at the beginning, it gets to be a smoother ride as the hay gets spread around the circle. The board sometimes even flips over. 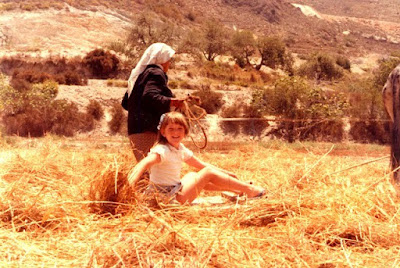 No harm is done because you just fall into a huge pile of hay. You must watch your fingers though and can’t hold on to the board for risk if being cut by one of the blades. When the threshing is done you must wait for a windy day and with a naturally grown pitch-fork, you throw the hay in the air. These pitch-forks grow on a tree in the shape of a fork and after being whittled down a little make the perfect pitch-fork. On the windy day, and after hours of repeating this procedure of throwing the hay in the air, the cut hay is on one side of the era and the grain on the other, it is quite ingenious really, each to be stored and used throughout the year. I would like to have shown you a picture of the pitch-forks but ours was lost. We have an era on our property and across the street is another era that is shared by three houses: it is communal property and doesn’t belong to any one of the houses but to all three. It is things like this that make buying land in Spain difficult. For example a long time ago your grandfather may have traded a donkey for the large algarrobo tree on the corner of his property, the donkey is long since dead but the tree on your land now belongs to someone else.

From Barbara Napier's Animo Stories here.
Posted by Lenox at 7:10 PM No comments:

A friend from Madrid sent me this: 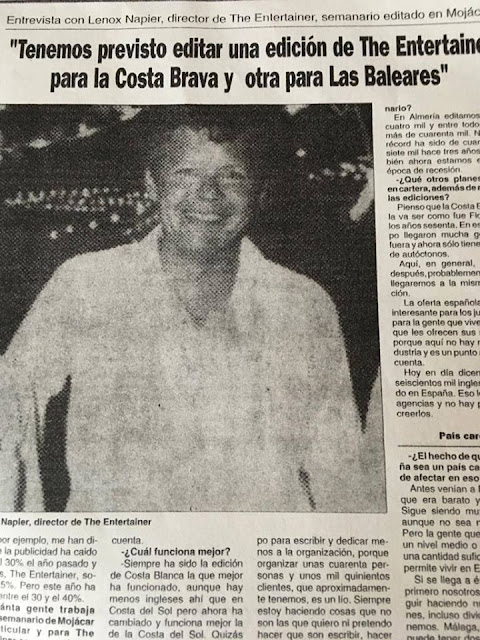 I ran Spain's largest free-paper (in any language!) back in the eighties and nineties. There were three editions: Costa del Sol, Almería and the Costa Blanca - I never got as far as the Balearics. Of course, a free paper doesn't mean the printing and distribution doesn't need to be paid. The idea is to put in lots of adverts (and some decent copy to make it worth while picking up). Thus the balance - the advertisers pay for the printing (and maybe a bit for the owner to buy a beer).
These days, with colour, the internet, competition, embarrassing self-promotion and a sprinkling of sharks in the world of the expat press, I'm sticking to just producing a few blogs instead.
Posted by Lenox at 10:25 AM No comments:

On the Road to La Matanza

It was one of those adventures that sometimes spring up over a beer. It seemed that old Antonio el Perejil (Tony the Parsley) had recently gone to his reward and had left his house to his son, who wanted to sell it.
The house was, apparently, quite close to Níjar, recently brought into the pack of Almería's Most Beautiful Towns (actually, there should be about fifty on the list), and up a track. 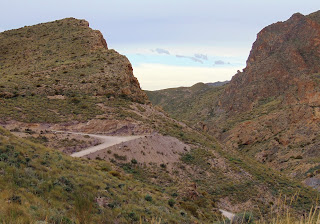 Into the Nowheres.
We drove into the pueblo to find the road which, as Google said, led to a walkers' path, was closed. Reversing down a narrow street and around the other way, we waved down an old fellow and asked him which was the best way to get to La Matanza.
A great name, no?  It's called La Matanza because this was the final stand of the Moors in the Níjar of the Reconquista, around 1490. 'Oh', says the old man, 'you mean Antonio el Perejil's place? He's dead you know'.
Yes, we knew that.
'Well, you go out of town, along that road, then up this other one, round there you know and it's just a hop and a skip. I was there only a few years back, lemme see, well in around 1980 now that I think of it'...
I helped the old boy back onto the pavement and we pulled a u-turn and, as they say here, we abandoned Níjar. 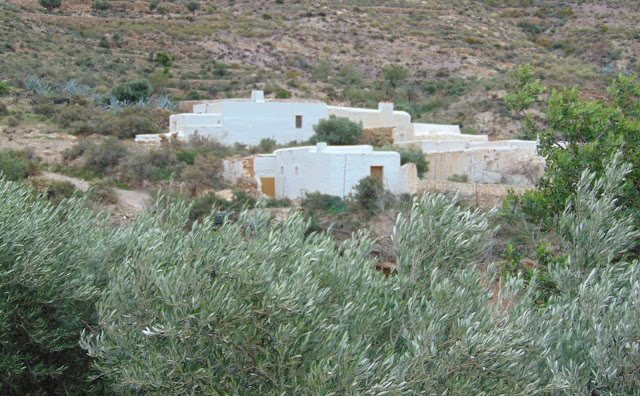 The new road we found turned into a street and from there into a track, and then a river bed and then a track again. We were about ten kilometres along this route, by now with alarming drops on one side and cliffs on the other. Google had fizzled out and we were wondering whether to go on or turn back when a van arrived in a gentlr cloud of dust (you are never completely alone in Spain). Now my Spanish is pretty good and Alicia is from Almería, but we had trouble with the man who climbed out of the Renault to have a look at us. 'Gor and blast', he said 'La Matanza? It's just down there'.
We peered uneasily over the drop. 'Of course she'll make it', said the man, looking appreciatively at our car, 'mine does it, no worries'.
We arrived at the house, which had some olive trees behind it and a courtyard to the right. One of the neighbouring houses (they were all empty) had solar panels and a full reservoir.
In the Bad Old Days, during and after the Civil War, a place like La Matanza, an isolated clutch of a dozen houses, was probably a good place to be. It was safe, ignored and produced its own food and water. There wasn't much to do after night fell, especially if you had run out of candles, but one rose early there.
Now, there's no one left - apart from the man with the van - although he would be living back in the pueblo, where there's electricity, TV and a number of decent pubs.
A tired sign pointed back towards Níjar, at 4.5kms. That was probably the Google walkers route.
It was a cold and blustery day, so the pictures aren't as bright as they would normally be, up in La Matanza, which looked, we decided, like a modest version of Machu Picchu, but without the tour buses.
It's for sale, if you're interested I'll mention you to Antonio's son. it's probably ideal for someone who wants to get away from it all and can't afford Algeria.

I was with my father in a dream last night. We were together in an office of some sort and I saw a bookshelf on my left. As my father was talking to the fellow behind the desk, I took down a book, thinking to read it. It was Ray Bradbury's 1953 classic Fahrenheit 451. I put it back. I had read it a long time ago.
The novel (as you probably know) is about a fascist society that burns books. 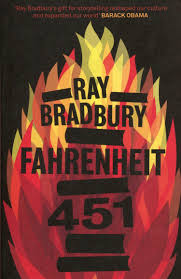 Maybe I have been thinking of the Vox party which is evidently doing well in Spain. Whether they are ready to burn books yet, they are certainly dangerous. Javier Ortega Smith, their Nº2, threatened the spokesman for the PNV regionalist party Aitor Esteban during a debate on the TV last week: ‘“Worry, worry I tell you. Worry, because when we can, we will abolish your party”’.
But dreams, apart from the ones that fascists invariably have, are more complicated than that.
I went in to the main bookshop in Almería this morning. It's called Librería Picasso. I thought I would treat myself to a new book.
In Mojácar, you can pick up (and I do) four or even six books for a Euro at the PAWS, the MACS and most other charity shops. Then in the Friday market in Turre, there's an Englishman called Tony who sells (re-sells) thrillers for 2,50€.
Between one thing and another, I am rarely able to afford the luxury of a new book for twelve Euros (that works out at seventy-two second-hand ones!).
The Spanish print their book-spines upside-down for some reason. You have to look at them cricking your neck to the left to check them out on a shelf, instead of going right as for English books. The Picasso people, however, blithely stack their all their books, Spanish and English both, leftly - which is a little tiresome.
On their English shelves (downstairs to the right), the first book I saw, its dust-cover flat against the shelf, was Fahrenheit 451.
Twelve Euros it cost!