Mojácar: This Thing About Noise

A new group has just appeared here in Mojácar, it's against excess noise. Here's its pitch:
'The Platform MOJACAR WITHOUT NOISE is a nonprofit organization which has been created by a number of neighbours and residents who defend their right to be protected against acoustic aggressions of any type and anti-social behaviour in special during the holidays.
We don't belong to any political party and we believe in the democratic dialogue that generates the balance among the citizens from a responsible position. It has been created because of the continuous disturbances from bars, discos, etc and in residential areas that generated too much noise and anti-social behaviour.
This platform is open to the participation of any neighbour or resident in Mojacar who wants to share, report or look for support in the fighting against the damaging effects of noise or anti-social behaviour'.
Mojácar is bitterly divided between the mayoress' party and the opposition parties. The first is strongly in favour of noise control, with fines for excess noise, live music, 'high heels in apartments', 'playing dominoes noisily' and dogs barking loudly. All very commendable and no doubt a vote-catcher for residents sick of the young tourists who are up all night, boozing and shouting.
On the other hand, the slightly less tenable argument that noise is an inevitable by-product of tourism, which, we are told, is 'our only industry'. Mojácar, they say, lives from tourism, as if the tourists should have precedence over the residents' right to live here peacefully.

Years ago, things were truly awful in the short summer season which Mojácar seems to prefer for its tourist season (with many places closing for the winter once August is over). There were three bars on the side of the village nearest to me and they would play ear-splitting music until four or five in the morning. I once wrote a piece in Spanish for a local newspaper saying that I couldn't fall asleep each night until one or other of the bars played that particular summer hit that I so enjoyed. In reality, music over distance, mixed or otherwise, loses its shape and all you get is the bass line. Boom boom.
Yes, live music is fine, but let's limit it to midnight. Indeed, you could try starting the entertainment a bit earlier!
The arrival of the new anti-noise group may be a political manoeuvre from the Town Hall, cynically outed to gather votes for next May's local elections, or it could just be the cry from people fed up with the ghastly tourist season, now drawing to a close.
But unfortunately, the village fiesta has just started. Extended by an extra day this year to five, the fiesta started with a bang (to coin a phrase) and means to carry on with as much noise and loud music as possible. Last night's band in the main plaza of the village lasted in full boom boom mode until six this morning. The bangs from the 'firecrakers' (as the Town Hall calls them), but thunderflashes to you and me, are enough to scare the animals, make the dogs bark, frighten the horses, and irritate the neighbours. Is the Town Hall against noise? Really?
Above all (and now we shall see if it is really apolitical), will the new anti-noise association make a stand? 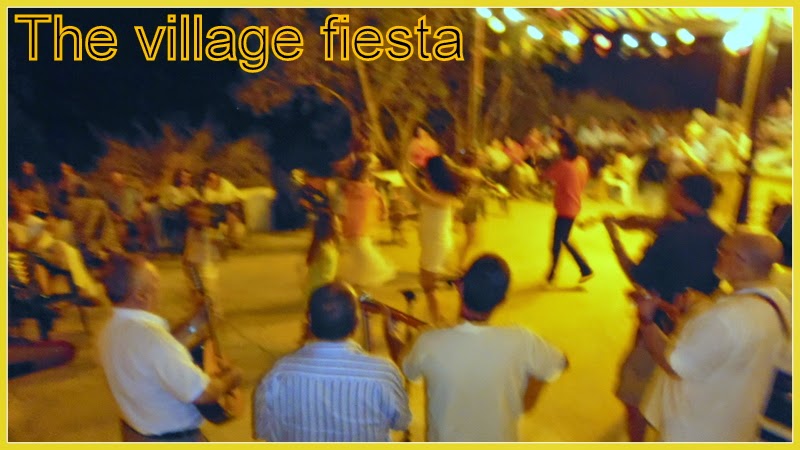 We had arrived there by walking down a path in the darkness, ducking under trees ill-lit by our mobile phones, and along a riverbed as far as the tiny village called Moras. We had been eating a picnic dinner with some French people who had bought and fixed up a small farmhouse in the sierras behind Sorbas, with a view from their terrace of the crumbling hamlet huddled under the cliffs across the valley. Tiny biting flies clouded around us as we ate salad, chorizo and salmon. A German called Thomas was explaining about the village fiesta and the music that he and a small group of Spanish friends were rediscovering - old music from forgotten times.
Safely arrived in the village square, the seven musicians set up and began to play: Old malagüeñas, strange songs from the hills of Almería, peculiar pieces sung by a local woman ('I can't dance when I'm wearing my specs' was one). A few people tried anyway...
Over at the bar, I sunk a few beers and wondered how much a better camera might cost...

The End of an Affair 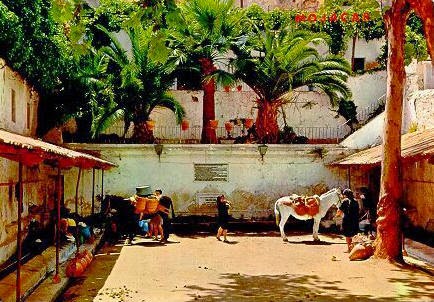 Local writer Paco Haro presents his book this Saturday 16 August about the early foreigners who arrived in Mojácar between thirty and fifty years ago. It's called 'Mojaqueros de Hecho'. (8.00pm at the Artesan Centre). Paco's father ran the small hotel in the main square where most of us stayed while we found our way around and perhaps bought an old house locally.
The book is divided into four sections, plus cameos about some of those involved. I'm reading the third part at the moment which talks about the end of the simple times of Mojácar when the investors in suits and ties started to arrive to build their apartments and their ugly and charmless hotels, make a quick profit and move on. It talks of how the most charismatic bits of the town were torn down - the old theatre, the hotel Indalo, the Arco de Luciana, and above all, the Fuente. When plans were announced by Mayor Bartolo to demolish the old Arab fountain and to raise up a marble mockery in its place in around 1988, Paco recalls in the book how the foreign residents reacted to a man, and together with local artist Félix Clemente Jérez and local carpenter José María Pérez, they went so far as a raise a demonstration in the main square with banners and whistles. I remember one sign held by a long-term resident and featured on the front page of The Entertainer - '90,000 pesetas to wash my knickers'. There was suddenly a large fight and it became clear, as Paco remembers, that we had passed from being 'fellow mojaqueros' to 'guiris de mierda'. They didn't need us anymore. 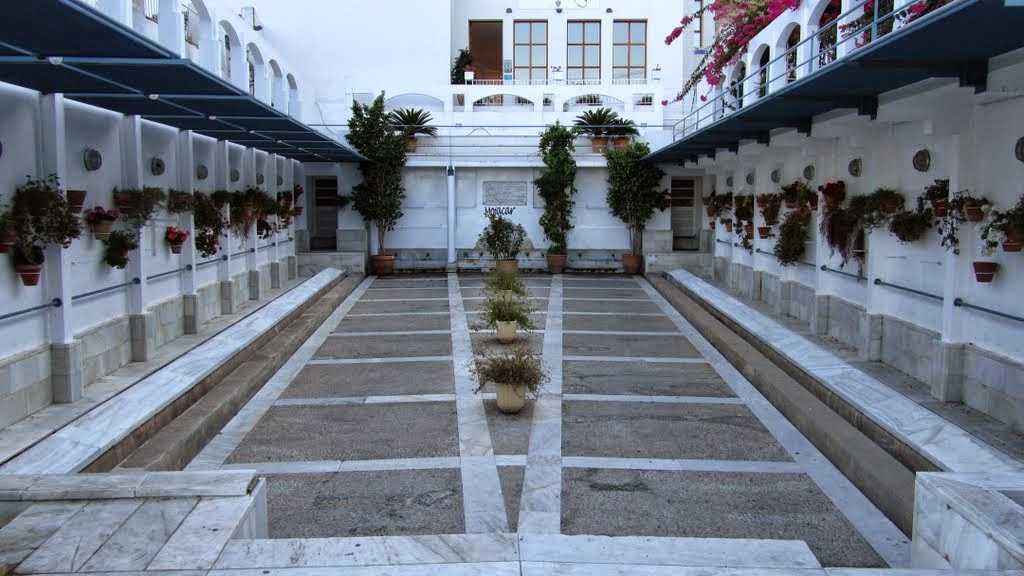 Following that demonstration, the new fountain was built. The whole reason for it was to favour an architect connected by family ties to the President of the Junta de Andalucía. Paco says in his book that following this episode, there were two prices in the bars, the shops and as offered by the local repair people - ours and yours. Suddenly there was no more theatre, cinema, art or music. Just commerce, disneyland and greed.
Mojácar remains a special place - the streets continue to be narrow (except where the current mayoress has demolished a couple of houses and turned the result into a large and spacious square) and the views are as delightful as always (except where the electric company put up a line of giant pylons across the so-called Valley of the Pyramids). The old narrow windows are now wide plate-glass affairs and the modest shingle nailed crookedly above the shops are these days giant neon signs. The summer queues of young and enthusiastic party-goers and bathers keep the businesses full as 'the only industry here is tourism' becomes the mantra (who needs residents?).
In Mojácar, we would sell our souls for an extra dollar...
So, my heartfelt thanks to Paco (and many other local friends), because while the soulless commercial side of our town is, generally speaking, a tragedy (you should see the tee-shirts), there are still those who would imagine Mojácar as a more people-friendly place: a residential town. That second picture of the fuente, the one in marble...? Above it is an art museum (or would have been, the Town Hall decided at the last moment to make it a municipal gallery instead).
Posted by Lenox at 11:16 AM No comments: 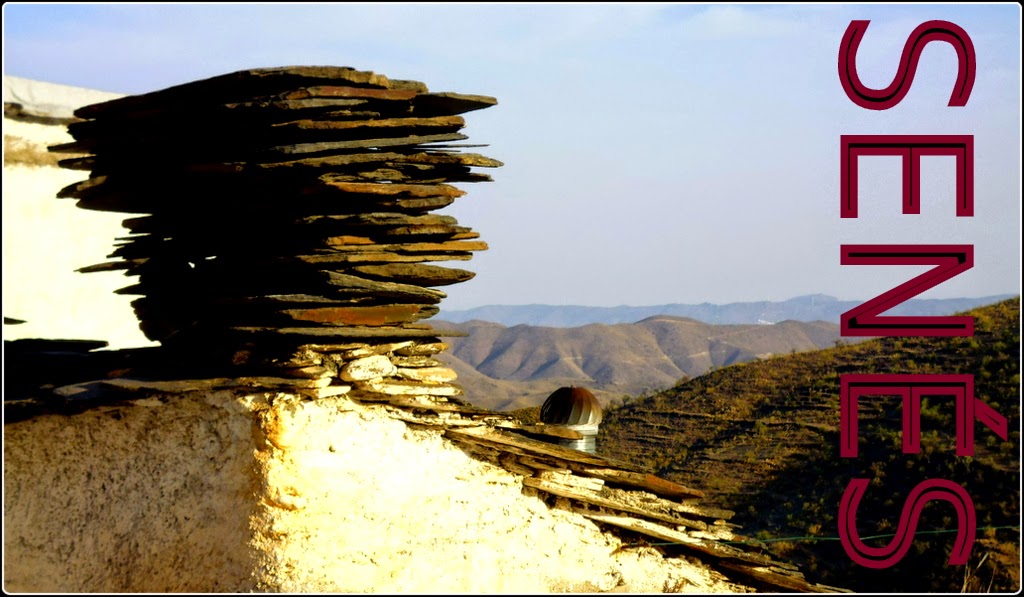 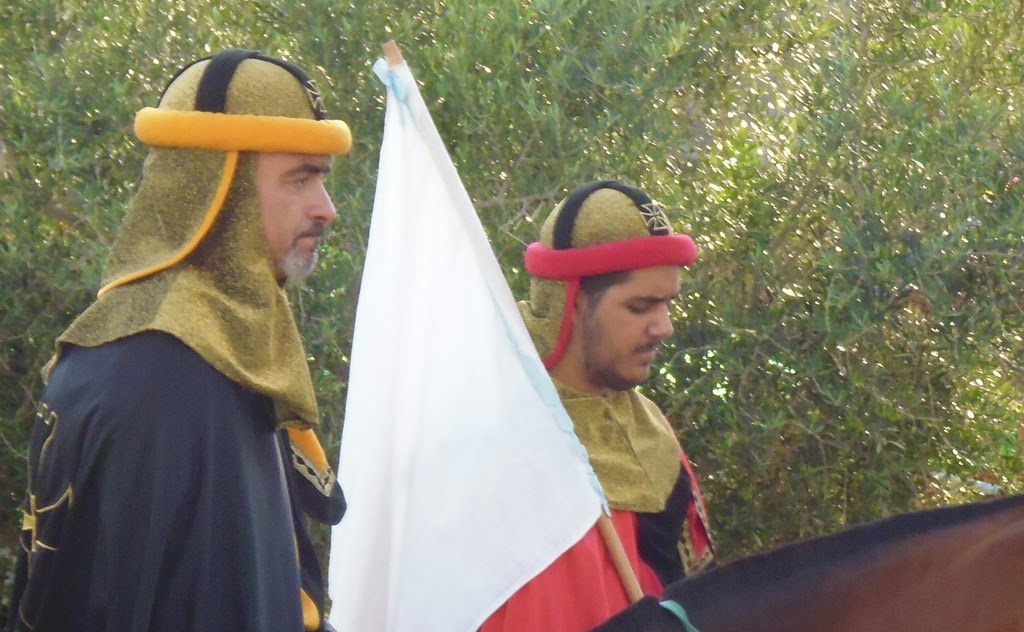 Senés is a pretty village in the interior of Almería. It's in fiesta this weekend, with its own version of the Moors and Christians. This edition has a small cast, with plenty of poetry and action. It seemed to be directed for the pleasure of the locals rather than for any larger commercial reasons.

A Day at the Toros

'The history of the bullfight is intertwined with that of Spain, so much so, that if you don't know the first, it would be impossible for you to understand the second'. José Ortega y Gasset.

'The bulls are the most cultured fiesta that exists in the world'. Federico García Lorca.
Illustration by Picasso (he liked them too)

I went to the bullring in Roquetas de Mar last Saturday. It's a new ring, built in 2002. Inside, they tend to look alike - round and painted red and yellow, with the narrow escape burladeros for the crew to get, quickly, out of the way. The sand is yellow powdery stuff called albero. However, being a modern ring, it has a few extra attractions. A small and interesting museum of 'bullfight stuff' - suits of lights, posters, mounted bulls heads, capes, photographs and video... plus the interesting revelation that there are sixteen permanent bullrings in Almería. A second gallery, just opened, has a collection of serigraphs from Picasso and Goya both. Fantastic. Seventy five of them and nobody there. Wow.
Later the same day, I was in Berja, a small agricultural town in the Almerian hinterland. It was their fiesta and I had been invited to a bullfight. We were a group of ten and we were in the sunny seats (called sol as against the more expensive sombra) and we were in the front row, on the barrera. 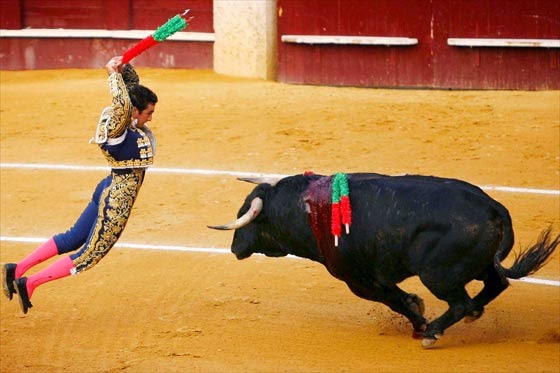 The entertainment was provided by El Cordobés (son of the sixties icon); plus El Fandi from Granada, who places his own bandilleras decorated in green and maroon, the colours of his city, and finally Almería's Torres Jerez. They have two fights each. Next to me sat a young woman who is studying veterinary school in Córdoba: a six year course. She wants to specialise later to become a bullfight vet. She knows all the fighters, their special passes, their history and their colours. She knows all the arcana about the toros and tells me pieces of information as the afternoon continues and sandwiches and beer are pressed into my hands.  The boy on the other side of me is shouting for an ear from El Fandi's second kill and, as the matador makes his circle of the ring, he tosses up the grim relic to my excited friend. 'I'm not having that in my fridge', says his mother sitting just behind me.
What to say? It was fun. The matadores played to the crowd, but they appeared to respect the bulls. Perhaps you can understand that, and perhaps you can't.
Posted by Lenox at 10:53 AM 1 comment: