The Rise and Fall of Podemos


Perhaps Podemos should have a close look at itself. It is losing support and has fallen into fourth place. Its message may be as important as ever, but, as with all far-left parties, there are too many tendencies pulling in various directions. Not helping this, the leader of the party, Pablo Iglesias, tends towards an autocratic control of the group, with the consequent loss of some of his associates.
Iglesias is a clever man, and has some good ideas, but he is not strong on self-criticism (an exception following his poor results in Catalonia has been posted heavily in the media). Indeed, there are few newspapers or other sources which have much to say for Podemos either by itself or in coalition with the Izquierda Unida as Unidos Podemos, and, apart from El Diario and Público (both cyber-news sites) the corporate media is uniformly hostile.
Podemos shot to fame a few years back, but maybe their star is burning out. Certainly a president with a pony-tail may be a step too far to imagine.

It’s also true that the voters can be fickle and, as this video shows, quite foolish. Podemos also makes for good jokes, as the fake news site El Mundo Today knows. However, within the joke (Podemos, ‘We Can’, to change its name to ‘We Want’), a kernel grows: the group is indeed considering changing its name as part of a change in image (maybe you should consider cutting off that coleta, Pablo!).
Posted by Lenox at 6:13 PM 1 comment:

I Didn't Make It Mama

Amidst all the (endless) doggy stories on Facebook, along came a post about a far larger tragedy that's happening right here on our doorstep. I felt it was worth the translation. 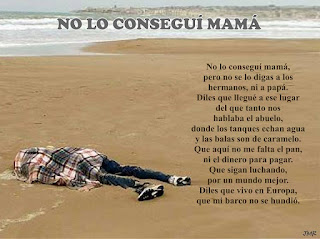 I didn't make it, Mama.
But don't tell my siblings, or
say a word to Dad.
Tell them I arrived safely
to that place that Grandfather
loves to speak of
- where the tank are full of water
and the bullets are made of sugar.
Here I have both my bread
and the money to buy more.
Tell them to keep fighting
for a better World!
Tell them I live in EUROPE,
And that my boat didn't sink along the way.

Sunday was the romería de la Virgen de Mar, which was held around the chapel in the dunes past Retamar, Almería. The virgen was washed ashore there many hundreds of years ago, they say. The gypsies, the horse people, the devout and the curious were there, with their picnics and their children. The horsey types brought their buggies and their mules. There was a market selling toys and hats and - for some reason - a small stand from La Voz de Almería, our local paper.
The bishop of Almería was in the chapel, reading scripture and eulogizing the Virgen. Nearby, a jolly trailer advertising 'Vinos' was doing a good trade.
I ordered a Málaga Virgen to toast the Almería Virgen. It was the least I could do. 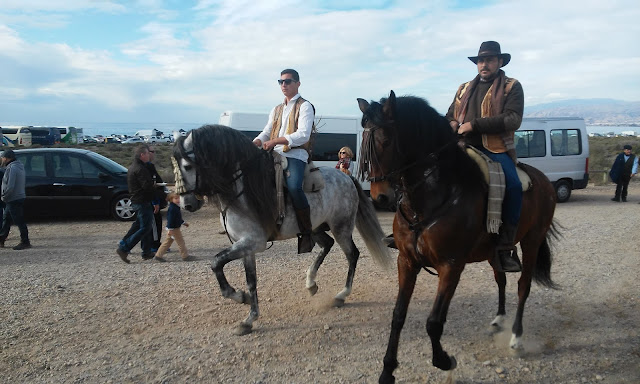 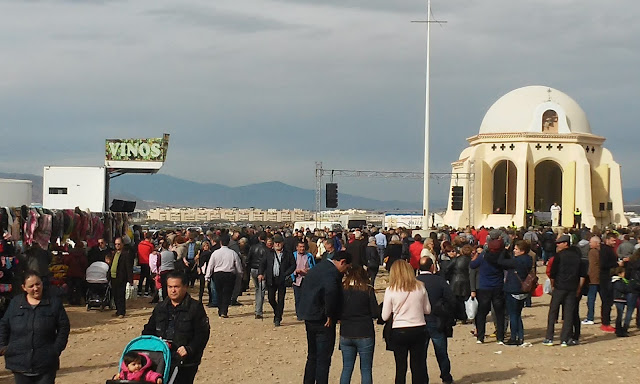 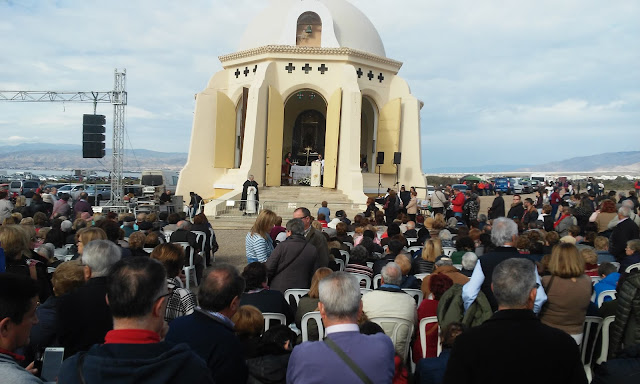 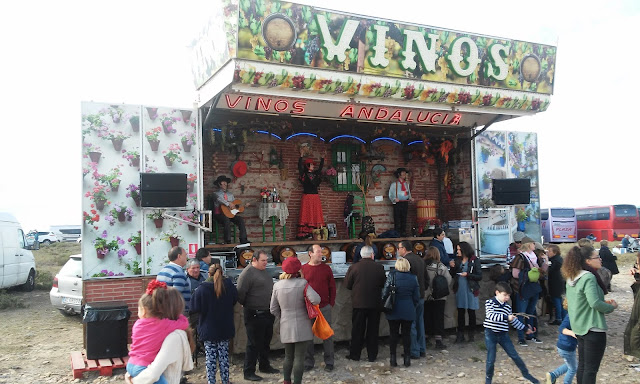 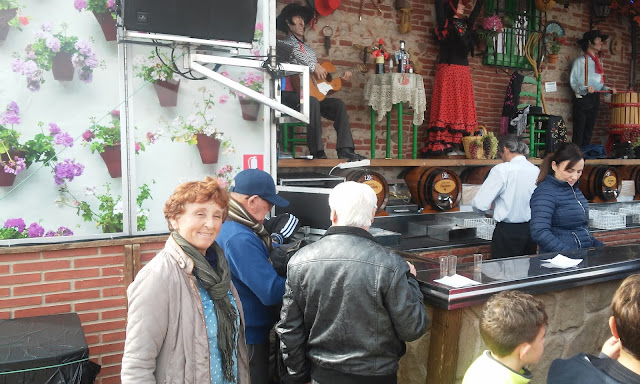 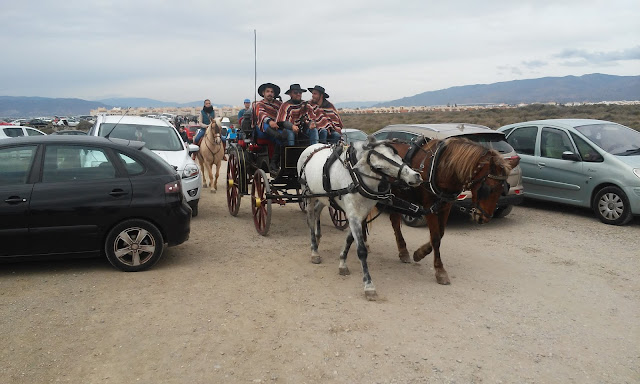 Fitur - Because We Need More Tourists.


The huge Madrid tour fair FITUR is held next week – starting on Wednesday and running through Sunday 21st.  This massive event, under the light of over eighty million foreign visitors to Spain in 2017 together with any number of Spanish holidaymakers (Catalonia, disappointingly bucking the trend following the political upheaval there), will be a temporary home to an expected 10,000 exhibitors, as 2017’s figures were ‘...9,893 exhibiting companies from 165 countries/regions, 135,858 trade participants and 107,213 people from the general public. A video from LaSexta says that there were – in the first eleven months of 2017 – 18 million Britons, 11.4 million Germans and 10.7 million French visitors (no wonder they forget about us foreign residents). Does Spain (with a population of 46 million souls) need more tourists – or merely more income from tourism?

Meanwhile, Mojácar is going to be there as it is every year.  I've been a couple of times in years gone by - when the politics of our town allowed - and it's a massive show indeed. Countries with exhibitions, dancers and free drinks (try Peru for its Pisco Sours if you have the chance). Flamenco guitarists and people with whistles, didgeridoos and nose-flutes. All very jolly. Even Gibraltar has a small and slightly embarrassed presence there. Mojácar for a while had its own stand, which cost a fortune, but - gracious - look at our tourist figures today! We must keep those souvenir shops a-trembling.
One of our best ideas was to give Indalos de Oro - Golden Indalos - to those who have done much to bring tourism to our fair town. These have, naturally, gone mainly to Spanish entrepreneurs or (in the current trend) to Belgian cyclists, Bless 'em. Indeed, some of our galardonados have been useful to our tourism, others less so. We remember the man who owns and closed the Moresco hotel in the pueblo Arturo Fernández as one, the PP politician Rafael Hernando as another. Singer Miguel Ríos (a regular visitor) as another.

After a prolonged campaign on Facebook - the Tourist Department even relented and gave one to Bob Jones - a local British resident who sent many beautiful pictures of our town over the years to the weather forecast on the national TV, who in turn featured them in their program.
Last year, they faltered slightly and gave the two prizes to the children of Jacinto Alarcón (the mayor who revitalised Mojácar in the sixties). This year - no one, so far, is saying.

Later: On Wednesday, the first day of FITUR, the Tourist Office relented and produced this notice:  '...This year, having reached in the last edition of FITUR the 25th anniversary of Los Indalos de Oro de Mojácar, the delivery of the traditional Golden Indalos is transferred to the municipality itself, celebrating a feast of the Indalos de Oro that will take place in the town, on a date yet to be specified.
The aim of this initiative is to ensure that all residents and neighbours can enjoy an important event for the locality, while at the same time making it easier for relatives and friends of the prizewinners to share such a special moment...'. Stupid, or what?
So, the whole Indalo de Oro thing has been washed up through a complete lack of imagination.
Posted by Lenox at 10:06 AM No comments: 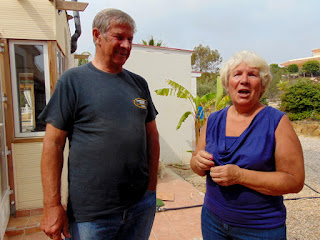 Helen and Len Prior have now been without a house for ten years as theirs was demolished in a pointless exercise by the Junta de Andalucía on 8 January 2008. Since then, they have lived in their garage which had another licence and thus escaped the atrocity. The house was in a quiet area outside Vera (Almería). There are other – unscathed – houses nearby, and the zone is neither on the beach, nor in a flood plain, nor on the motorway, a river or in a national park.  As Almería Hoy reports, the Priors were advised by their lawyer to sue the local town hall and, after a lengthy period, the Priors have decided reluctantly to accept a compensation of a third of the amount they had claimed (following a successful appeal from the ayuntamiento). Bad for the Priors, of course, but as the article says – terrible for Spain’s reputation abroad.
In a statement to Business over Tapas, Mrs Prior says ‘Len and I will not be celebrating our ten years of purgatory.  We are hoping to be paid by the end of February/March and just turn our backs on it all.  It is only one third of the money we requested and thought we were entitled to, but to be honest, we thought the powers that be were hoping for us to die without being paid at all. So living this long has to be a result...’.
Posted by Lenox at 5:58 PM No comments: