Tourist Figures, as Accurate as Always

The official figures are in - 1,447,599 tourists visited Almería during the first eleven months of 2018. To think: just one more teensy-weensy visitor squeezed in, and we would have rounded up that figure to 1,447,600.
Figures vary by the season, with lots more trippers docking in Almería in the summer than during the lean winter months (known in Mojácar for some reason as 'the Lycra Months'). But, adding last December to this year's crop, we can probably claim 1,500,000 tourists in Almería in 2018.
All looking for souvenirs to take home, which explains the local enthusiasm: they come, they buy, they leave.
They are only here, apparently, for a brief spell, just enough for a sunburn, a hangover and a souvenir made in a Chinese sweat-shop. The average visit being around half a week.
It would be longer, but the bean-counters have been obliged to add the cruise-ship visitors, who are generally here for just six hours or so.
Now, they can't be quite as specific as they would like, as not all visitors are visitors. Some drive in from Murcia and stay in the spare-room. Some are en transit to Melilla or Seville. Some, visiting Almería, are from Almería. Some just crossed the border from Granada for lunch.
Indeed, some dropped by the province more than once in 2018. We didn't see anyone ticking them off on the road between Puerto Lumbreras and Huercal Overa.
The Almería tourist board, and its satellites, is continually looking for more visitors, with some current drivel about bringing them in to see the plastic farms. Yes, a two-week holiday in Spain with all the cucumbers you can wish for.
The only people that aren't added to the visitor list seem to be those who live in this fine province, including the foreign residents.
But, consider this: while there's no promotion, no office, no agency and no budget for foreign residents, who bring 150,000 euros with them to buy a house and another 15,000 or so for a car and a television, who spend their pensions or disposable incomes on living here for the whole year, which lasts a 100 times longer that does half a week, and who are here next year as well (while the satisfied tourist, whose souvenir key-ring has now probably broken, decides on Italy for 2019).
One reason we are seen with slightly wary eyes is that, unlike the visitor, we put down roots. Almost anything else that you can sell someone will then be taken away by the purchaser. Not a house though, that stays put.

Will We, Won't We, Will We Have the Vote?

One of the downsides of Brexit – as far as the millions of Europeans who live in the wrong place (Britons in the EU-27 or the legions of EU-27 people living in the UK) are concerned – is the lack of information about their future.
It’s almost as if no one cares.
Which, of course, they don’t.
The European Union was always more about trade opportunity than displaced citizens’ rights. And nowhere is this more obvious than in our supposed (and somewhat modest) political privileges. Indeed, it’s hard to even plan for power and influence when you don’t know how many people are going to participate in elections and are in doubt as to how they might vote.
This was the conundrum that faced Alfredo Pérez Rubalcaba back in 1995 when his president Felipe Gonzalez, observing a small but significant change in the Constitution made in 1992, decreed that the Europeans living in Spain would be able to vote in European and municipal elections that same year. Rubalcaba, the Minister of Presidential Affairs (the man who much later substituted our residence cards for the handy A4 police letter and passport combo), was appalled. God only knew how they might vote, he thought, allowing the European residents to go ahead in the European elections (after all, you are voting for people who represent Spanish interests in Brussels) but stopping the municipal vote until the next one occurred in 1999.
The constitutional change of 1992 was interesting, as it gave European residents (who now had to register along with their inscription on the town registry – the padrón – their separate plea to vote), not only the active right, but the passive one also (or, in English, that they could now join or even lead a local political list).
Some of us eventually did, and Rubalcaba will have been pleased, four years after his mischief, to note that we voted locally, for local candidates and, in short, behaved ourselves.
In fact, most of us didn’t vote at all, and even today, there is only a modest number of foreign councillors scattered across Spain, in local government or in the opposition, together with just one foreign mayor, Belgian-born Mario Blancke in Alcaucín, Málaga. Many of these councillors are stretched along the coast in (forgive us) small and insignificant towns, are thirty-seven of these are British. Proportionally speaking, the foreign residents are woefully under-represented.
So, what would happen if Brexit caused those British councillors along with all other British residents in Spain to become disenfranchised as is the current scenario from the Spanish electoral commission (‘when and if the UK implements Brexit, their nationals, resident in Spain, will lose their right to vote’)?
Firstly, candidacies from other EU residents, Mario Blancke as one example, would lose way with less ‘foreigners’ voting for their lists. Secondly, town halls, like any other political agency, would take less notice of a population that had no suffrage, and thirdly, the British residents themselves would be returned to that old position of ‘no taxation without representation’ (an ugly place to be, currently suffered by many other foreign nationals living in Spain). 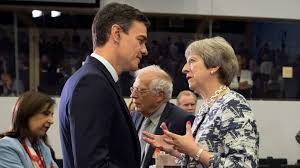 Spain indeed has bilateral agreements with some third countries. Norway from the beginning, later followed by Iceland and a few South American countries along with New Zealand, South Korea and (of course) Trinidad and Tobago (22 of them live in Spain as residents!). Citizens from these countries may vote, but not present themselves as candidates on electoral lists.
An article in El País this weekend changed the game-plan. It said that the British and Spanish authorities were discussing an eleventh-hour agreement to give their guests rights to vote, active and passive rights. ‘The Government hopes that the bilateral agreement would be applied already in the municipal elections of May 26th’. In this agreeable situation, we could maintain our vote in local elections, even if we were to lose it in the European ones – a small loss as things stand. However, in a caveat which would please Rubalcaba, we read ‘...Once it is signed, the deal will be in the same category as any other international treaty and will require ratification by the Spanish and British parliaments. This will probably not happen in time for the May 26 elections next year, diplomatic sources have admitted. In order to work around this problem, the Spanish Foreign Ministry is considering the option of making the agreement go provisionally into force as soon as it is signed by both governments...’. Perhaps, if they had started this conversation two years ago, instead of last week...
Maybe (just maybe) the UK will stay in the EU – either a postponement of their departure or a second referendum with a happier end (hello, Westminster, it would be nice if we were invited to vote in such an important plebiscite this time).
This (apparently, hopefully, maybe, possibly) being the case, we foreign residents will still need to register to vote – by asking for the hoja de inscripción del voto – in our local town halls, before January 15th (or December 31st if you are not from the EU).
Would there still be time to revise our candidate lists for next May, in the event we keep our vote?
Barely.

It's thirsty work watching a bullfight, which is why people bring along their own refreshments. Almería itself has a traditional 'half-time' where the crowd passes sandwiches and beers, or a squirt of wine from a bota, to their neighbours.
All good fun. The second-to-last bull, the Quinto Toro, is also the name of Almería's venerated bull-fighters bar, on Calle Juan Leal, next to the Diputacíon near the market. 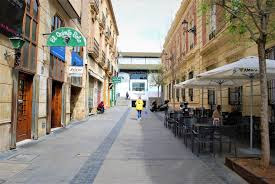 We went for a drink and a bite to eat last week. Loli left me outside the joint and went off to park (I'm on crutches still). There's a few tables outside on the pedestrianised street, but I went inside, to see the sights (and of course the tapas).
The bar is on the left as you go in, with tapas and a small stove. It's not really a restaurant, but you can get raciones to fill you up.
I had a couple of small beers, with their tapas (a tomato and onion job and then garlic potatoes with boquerones). The bar was founded in 1947, so it's not the oldest place in town, but it makes up for this with the amount of decoration. I admired the posters, paintings and photographs of bullfighters past and present, the odd stuffed bulls head and other other sundry paraphernalia. Then Loli arrived, having apparently parked the car in Murcia, and we went into the small tabled section for a ración of ox-tail ('rabo de toro').
This is a plate of lumps of bone covered in almost a jellied meat, with a heavy gravy. It needs a good glass of Rioja to work. It was delicious.
The bar is fun, and the refreshing walk (hobble) back to the car filled up the rest of the afternoon...