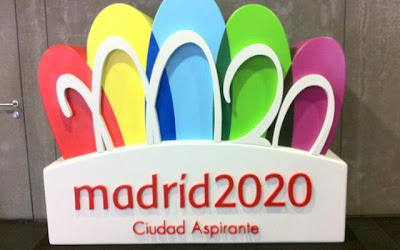 Spain has passed its own Internet copyright law called the 'Ley de Sinde', after apparent heavy pressure from the American embassy, pressed in turn by Hollywood. Oddly, the Ley de Sinde, Sinde's Law, was crafted by the Minister of Culture from the last Government, the PSOE Ángeles González-Sinde, where it was pulled at the last moment by popular opprobrium. The masses, for once, had spoken. Then, as the PP Government took over in December, the socialists' law was quickly switched through Parliament and will be on the books from March. You would think that a Minister for Culture's job would be to support culture, rather than cut it, but there you go - and to Hell with the masses, by the way.
So, the Americans forced through the anti-copy law here in Spain, yet a few weeks later, failed (thanks again to the masses) to do the same thing through their own Congress back in Washington.
The Pirate Bay, a Swedish file-sharing site, recently commented that Hollywood itself was born out of filmmakers moving away from the East Coast, where Edison had just invented the first movie projector, to avoid his patent and to market their own systems.
Well fine. All this becomes the second step in the policing of the Internet in the West. The first was to do with paedophilia (and who is going to argue with that?), now it's about protectionism and later, when we get around to it, it'll be about freedom of speech.
In fact, a ripped-off film may lose someone a few cents, but that someone is either a copyright owner - a rich corporation - or a wealthy participant. The money won't go to the stage-sweep, who might be grateful for it. With music, the trail is even easier. Real musicians do what they do to make music or to make money?
Who gets that money by the way: all competent musicians, or those whose production is manipulated by the companies?
We won't mention the SGAE here - who collect the royalties and sometimes put them to creative use...
Today, a piece of Spanish news about copyright ownership appears, that the family of the writer Valle-Inclán, the Civil War poet who died seventy five years ago, should have the copyright ownership extended by three years because their sugar-ticket didn't receive any rents during the war years. The family has apparently fought ever since over who should get what from the plunder and has even held back some material from the Public view for their own reasons of profit. Should families (or record companies) live from dead authors and musicians?
The other night I saw a film. It came from a friend who had bought it from a market stall. It was an illegal copy. It was also very bad, but that's beside the point. I have three alternatives with such a film: see it and pay, see it for free or not see it. If I pay for it, and it turns out to be bad - can I get my money back? If I see it for free, or I don't see it - is there any material difference to the copyright owner?
For that matter, if I like a CD and play it a hundred times, should I perhaps be paying the record company some more moolah? Can I lend a book to someone without alerting the family of the author?
Now, if I am not going to pay for something, having obtained it for free, then the film or music company will not be taking my shilling, whether I see or listen to it or not. However, since the film from the other evening, 'Mr Popper's Penguins' (truly awful rubbish with Jim Carey), could never be classed as 'culture', there may be a way out here. Put a block on downloading or copying rubbish and leave cultural material alone. Call it 'Censorship on Entertainment' and leave it at that. We could have a 'Ministerio de Entretenimiento' whose job would be to collect our savings and send them to the moguls.
Meanwhile, those who, for monetary considerations, decide against downloading 'Fast and Furious Part V' will have a choice - read a book, download something of value, or watch telebasura.
The certainty is, with all of those clever kids out there equipped with a digital brain and a keyboard, the Internet should remain safe from the lawyers, politicians and bankers who would like to control both it and, of course, us.
Posted by Lenox at 9:20 AM No comments: 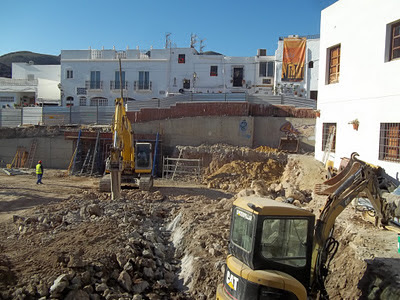 Mojácar is quiet these days - as in 'there's no one open and no one comes to visit' rather than 'it's quiet'. Ever morning, the bangbangbang of the drills wakes up the neighbours at an early hour. The dust rises and the trucks come in and out. This underground car-park for just 37 cars will cost over 1,5 million euros and oblige the pedestrian village to have a drive-through lane past the church. The whole thing should be ready before June's Moors and Christians festival.
Posted by Lenox at 10:22 AM 4 comments:

The Availability of Books

Without television (long story), we read a lot at home; either churning through the Internet or staying up with a good book. Years ago, when there really wasn’t a TV option, and satellite watching was still a far-off idea, we would carefully write our names in our stash of well-thumbed novels – spy stories, thrillers, derring doos and bug-eyed-monster books – and lend the best ones to our friends, who would rarely, if ever, return them. Sometimes, I find one of our collection in a jumble sale or on a friend’s shelf.

There isn’t much in the way of book-shops here – and the rare one that opens usually doesn’t last long (there’s a good one called Bookworld in San Pedro that bucks the trend) – so I go along to the local markets now and again to fill up with the reasonably latest used and cast aside thrillers. Mojácar has a Wednesday market with one chap with a good selection in English and a second Sunday flea-market with a few stalls of books of every and any description. Turre has an English language book-stand on Friday market and Albox has a large Saturday flea-market, although I have yet to visit. Otherwise, a few supermarkets – notably SuperTurre - sell a cheap range of new books at five euros, and there are no doubt other places besides.

Perhaps the best choice is to join the Mojácar English Library (bottom floor at the Centro de Artesanía, now confusingly re-named at the Centro de Usos Multiples) which is open Mondays, Wednesdays and Fridays from 11.00am until 1.00pm.

Besides these outlets, we have the three fallbacks of Amazon dot com, friends coming out from England (via a good bookshop) or the wonders of electric books with Kindle and so on.

All of these mean I have plenty of books in the house, on shelves, in boxes and trunks and in an unsteady pile beside the bed. Being blessed with a faulty memory, I'm slowly working through the old ones again with the same sense of wonderment and surprise as the last four or five times.

The best book I have read in the past few months is called ‘The City and the City’ by a British author called China Miéville. It’s a murder mystery set in a city populated by two different nationalities that speak their two exclusive languages and walk through their city totally ignoring anyone or anything connected to the other population. They are taught from birth to ‘unsee’ the others as if they didn’t exist and, in the book, few people are able to ‘cross’. Odd, but makes sense. It also reminds me rather of life in Mojácar where many people also ignore the other nationality as if they simply weren’t there. The difference is, the English-speakers here don’t have a Council or an Elder.

Although they do,without doubt, have a better library.