I don’t even know if I feel much like writing at the moment, besides keeping the tradition alive of posting something – at least – once a month here on the Shilling. My Darling Barbara died less than two weeks ago on June 4th, victim of a long-term and horrible illness, named after the concentration camp doctor who apparently first identified it: Wegener’s Granulomatosis.
We buried her in the Mojácar cemetery on the Thursday, surrounded by the usual group of fascinating and occasionally rather odd friends that one finds if he lives here long enough: indeed, I just wanted to rush home and tell Barbara who was there to say goodbye – which was pretty much everyone except for an estranged brother of hers who thunders aimlessly about Mojácar on a Harley all day long.
But that’s over now: I’ll write about Barbara a bit later on...
I flew out the next day, Friday 6th, to California, where my younger daughter lives. I have always liked America and, over the years, I’ve visited or stayed there better than a dozen times, including lengthy stays in San Francisco in the mid-seventies and in southern Los Angeles a decade later. This time, I’m staying in Laguna Beach, further south and not so far from the Mexican frontier. Laguna Beach is a small resort overlooked by some spectacularly expensive homes (5 to 10 million dollars or more). The Pacific Coast Highway runs through it, furnished with more expensive and exotic cars than I’ve ever seen before. I saw an antique British sports three-wheeler yesterday. Stretch limos, Maseratis and souped-up golf carts roll past as I walk along the coast, with the beach on one side and an amazing 180 art galleries (!) on the other. Unlike Mojácar, Laguna Beach really is an artist’s destination – although few of them live in those big six million dollar mansions above the bay.
I have walked around the resort a few times – it’s tasteful, with no large hotels or signs of vulgarity – no wally-trolleys, neon signs or Banderas Azules to reassure the doubtful of the efforts made by the local authorities to keep their citizens happy. The architecture, a mixture of wood and brick, is much more varied than we are used to. No doubt the teeming hordes live elsewhere. As expected, the streets are crammed with beautiful, skinny blond girls.
The bus has a ramp on the front for bicycles, and the post office sells greeting cards. The local restaurants seem healthier than I might expect – there’s no evidence of French fries, or fast-food outlets. It’s an expensive town, with Thai, Mexican, suchi, and fancy places, together with some good (large) bars with live music and capable staff. Parking is expensive, with parking metres, but free to residents (who, presumably, have bought a permit off the town hall). But why not – tourists should not be able to take all the parking spots, don’t you think?
One of the things that is expensive is health care. An old case of sciatica returned to pain my leg, severely. I couldn’t walk more than a few steps. I tried a Thai masseuse (I would have tried one anyway) and then a chiropractor. I had my feet done over at the Chinese pedicure. I then found a local sports-injury centre with machines, weights, some rather nasty vitamin supplements and some friendly staffers who joyously twisted me into knots for two days (all I could afford).
I’m staying with my daughter and her Spanish husband, so I am speaking rather more Spanish here, between home life and visits to bars and restaurants where the staff are slightly surprised-looking Mexicans, than I do at home in Spain. Each morning, I even get to see a re-transmission of the news from Madrid on the frankly gigantic TV they have here. So, I’m keeping up with things at home.
Posted by Lenox at 5:23 AM 3 comments:

Homage to the Foreign-Born Mojaqueros 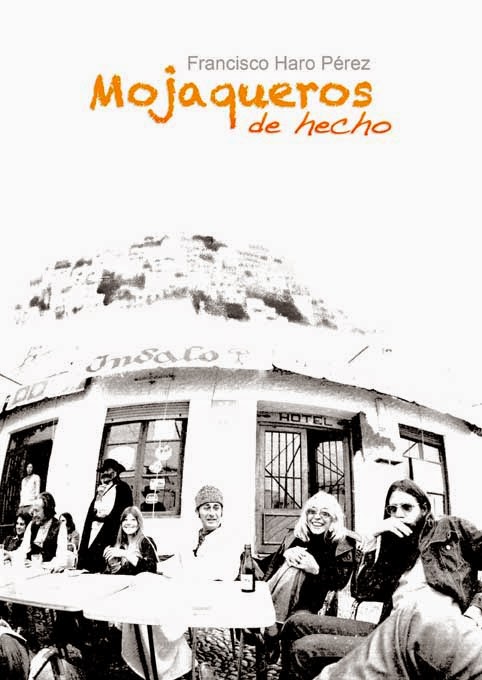 Mojácar was just another crumbling Andalucian village until the beginning of the sixties, when the mayor, Jacinto Alarcon, had the idea of giving away scrub-land or houses in ruins to those who would improve them. The town had drifted from 6000 inhabitants before the Civil War to nearer 600, and the advent of enthusiastic forasteros become the beginning of a new chapter in Mojácar's history.
The new vecinos brought their new ways, their culture, their tastes and, above all, their money with them. The town thrived.
While few local people have ever acknowledged the impact on their lives of the 'foreigners', whether they came from Madrid, Munich, Manhattan or Manchester, and the Town Hall still merrily refuses to do so, local historian (and ex-municipal cop) Francisco Haro, son of the old boy who ran the Hotel Indalo in the Plaza Nueva, has written a book about those fascinating and peculiar people who descended on the pueblo in the sixties. Here you will meet Sammy, the gay New York mafioso on the run from his family; Fritz the eccentric painter who could down a bottle of anis at a sitting; Charlie Braun, the large German womaniser who skied for James Bond, Tony Hawker who built hovercraft in his spare time, my parents Bill and Heather, My parents-in-law Jim and Mary, and so on. Bars, shops, ateliers were opened; intrigue, stories and the occasional feud followed. The local talisman, the Indalo, the little stick-man with the bow over his head, became as well-known in London as a bottle of Terry brandy.
The town eventually allowed itself to be seduced by a large tour-operator who set about ruining (once again) the attraction which had, for a brief decade, made Mojácar the bohemian capital of southern Spain. Local greed brought poor choices for the village, demolitions of historical buildings, unimaginative architecture and a plethora of small rarely-used apartments squeezed into an inadequate infrastructure.
The book is called 'Mojaqueros de Hecho' and will be presented in August.
Posted by Lenox at 5:30 AM No comments: