An Old Picture of Carboneras 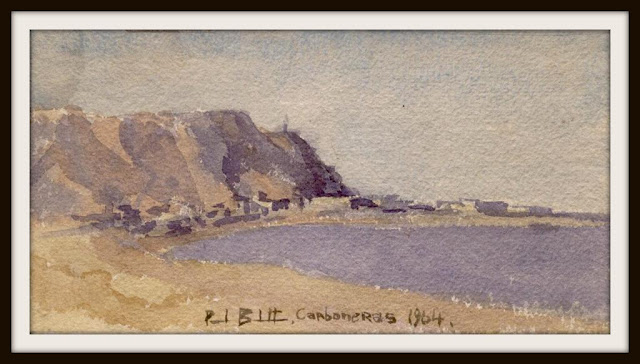 I've been contributing some photographs of old-time Mojácar folk to a page on Facebook, pictures which have been in some boxes upstairs for many years and are of some interest, if only to see what we used to look like thirty years ago. The page is called Mojacar Golden Years if you are interested.
Today, in one particular box, I found this, an old watercolour from Paul Becket. It's a portrait of Carboneras painted in 1964. Paul was one of the first foreigners to settle in Mojácar, together with his wife Beatrice. They were our neighbours in the Huertas below the Pueblo.
Posted by Lenox at 2:25 PM No comments:

Discover Mojácar (It's Just Around the Next Corner) 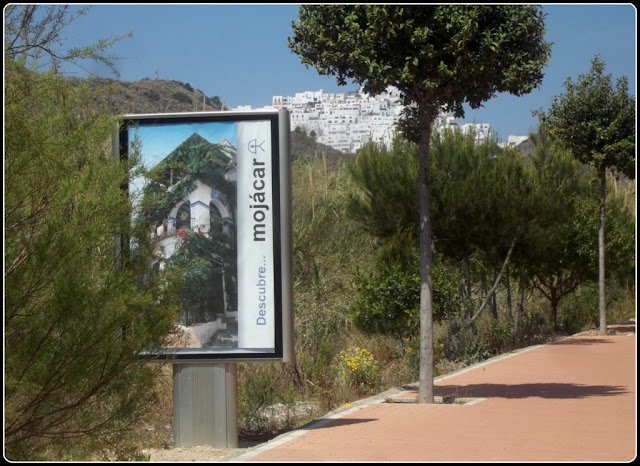 Mojácar wants tourists because it wants their money. To get these tourists, it's fashionable (while at the same time apparently considered to be useless) to make promotions here and there. Well, here anyway. While I have not actually counted them, I would say that there are around twenty 'Come to Mojácar' posters artfully posted somewhere around the municipality, as if we might believe in some way that the Tourist Department was doing a wonderful job of promotion elsewhere.
Sometimes the promotions are in Spanish; other times, in what passes for English, but isn't, they aren't.
Not content with the 'Dump on your Plate' school of promotion for those who can read English (known outside of Google translation as 'the poop in your soup group' - which has the advantage of avoiding having to invite foreign native-language speakers to participate in the feeding-frenzy), the sale of our small and increasingly irrelevant resort to the larger world has gone from the Domino Theory of Fame for All the Wrong Reasons (See The Times, The Independent, the BBC, and a number of Spanish national dailies enjoying a joke at Mojácar's plans to control noise down to a squeak), via the 'only souvenir ever brought home is a multa from the traffic police' (this in a tourist town with several hundred bars and restaurants, where drinking a glass of water is hardly an option), to a complete loss of plans or ideas for where this community might go. What are we promoting here? The chance to fill our street with a caravan of cars and buses, just to fill a few cash registers? Is that it?
Added to this, we have the freezing out of all forasteros, particularly foreigners, by the town hall - as if we are suddenly the problem rather than the solution.
A speaker in the plenary session earlier this week discussing the point about controlling the noise in Mojácar said that we live from tourism - both the relaxed and the party-time sorts ('turismo de descanso y turismo de ocio') - which rather obviously don't like to share the same apartment. This is the applied wisdom in our town, a resort with just one two-lane street running in parallel with the Mediterranean. Cheap hotels at either end and a clutch of bars and restaurants in the middle - controlled, generally speaking, by murderously high rents.
In our badly planned town, which enjoys probably the easiest winters in the whole of Europe, most of those hotels, bars and restaurants alike, are closed outside of the summer season.
There are of course three types of tourism - the relaxed restaurant and bed by midnight type, the noisy down to the disco and back for a party type and then the bleeding obvious make a fortune for the town long-term visitors or residents type, which generates most of the income here, known fatuously in Spanish as 'residential tourism' - the type that buys a house, a car, white goods, food and clothing. That pays municipal taxes. That appreciates and respects the town and the surroundings, that wants the best for Mojácar; that has an investment, an interest in the future of our community. That would like to participate, to integrate and... to help improve the reputation of this town. But we will never ever find the Town Hall spending anything on promoting that sort of tourism.
In the immortal words of John F. Kennedy, 'Ich bin ein cateto'. No hold on, it was his other remark I was thinking about: 'Don't ask what Mojácar can do for you, rather, ask what you can do for Mojácar'!
Posted by Lenox at 9:24 PM No comments:

A note from Reuters begins with: 'Spain is working on a new anti-piracy law which will be robust enough to keep the country off a U.S. watch list of copyright violating countries, Education and Culture Minister José Ignacio Wert said'.
Education and Culture. So, downloading a film, a piece of music or a book is illegal according to the minister of education or culture, unless, of course, the owner is paid. A service has been provided, and even shared (if I invite a few friends around), although nothing has been consumed. 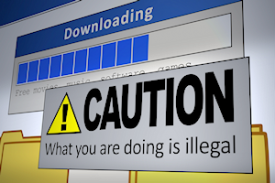 So, in the case of a movie, who gets the money when I buy a ticket? Keeping it easy, let's say the producer, the director, the star, the cinema and the taxman. Not the extras, or the cleaners - they've already been paid (probably in black money at that). Now, where do the producer, the director and the star each put their twenty million dollars? I'm guessing that, as often as not, it will be placed in an offshore account, where the money is rather obviously not used to help the State.
But, no, it's me they are worried about.
I have the choice of seeing a movie and paying, seeing a movie and not paying, or not seeing a movie. I could pay to see the film, but it's not available here where I live, neither in Spanish nor in its original language. Well, I can wait a year I suppose. Or I could grab a plane and fly to London and see it in the West End. Perhaps it will be on the TV in a couple of years time, courtesy of the Mars chocolate people. Perhaps I should buy a TV.
I hope that it's good.
So, if the copyright owner and the star and the producer aren't going to get my three euros (which is what, in the end, I'll have to pay the fellow on the street corner who has black-market copies for sale on DVD), what's the difference to them if I see the film or not? You see, if it's good, I could at least recommend it. If it's crap, at least I won't be writing to them and asking for my money back.
But all of this is of small account. The larger question is whether the Government, José Ignacio and all, are working to represent the interests of Spain and the Spaniards, of the dissemination in general of education and culture... or of Hollywood.
Posted by Lenox at 10:01 AM 1 comment:

Another Rubber-stamp Plennary Session in Mojácar 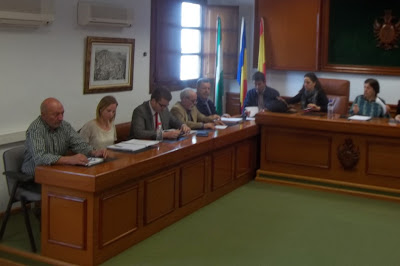 There was another pleno - town hall meeting - yesterday in Mojácar. There were originally six points, which were reduced to five after the temporary removal for another day on the chilling idea of the Mayoress to control all noise (taking this idea as literally as one might) from the daily grind of life in our eccentric community. While Mojácar should be a bit quieter than Butlin's, a place it increasingly resembles, it seems that there must be a balance. Indeed, the balance is very much ignored here, with rock-breaking machines now immersed in the second of the Mayoress' three big projects to transform the village and, more importantly, spend the six or seven million odd that the previous town hall got from selling a chunk of land from Macenas back to the promoters. Who since went bust.
The remaining points were to grant the taxi drivers an increase in their fares; to spend money on a taser for the local polis; to build an electric knob so that cars can't drive up to Rosmari's underground car-park which hasn't opened as yet, anyway - nine months after completion; to spend the councillors un-awarded Christmas bonus on children's scholarships and to support a dog shelter for the Micar Valley.
The main point of the meeting, presided of course by Rosmari and her absolute majority, was to begin on the third great project, being the evisceration of the Plaza Nueva and the remodelling of the viewpoint - the mirador - which is in a parlous state. The plan being to turn the first into another underground car-park and the second into another ayuntamiento.
The rubber-stamp councillors, missing from the photo above since they are seated to the right, were quick to shout 'aye' on every point, including this project to keep the town essentially under the rock-breakers (boom boom boom) for the best part of the entire legislation, noise and dust notwithstanding.
A new town hall, which we evidently don't need, should be built where the people who need it happen to live and located where they can easily gain access. Ninety percent of the population of Mojácar live on the playa.
The picture shows Angel Medina from Ciudadanos Europeos (left, next to Jessica Simpson), now back at his post in the opposition: The mayoress Rosmari Cano, can just be seen to the far right..
Posted by Lenox at 8:57 AM No comments: