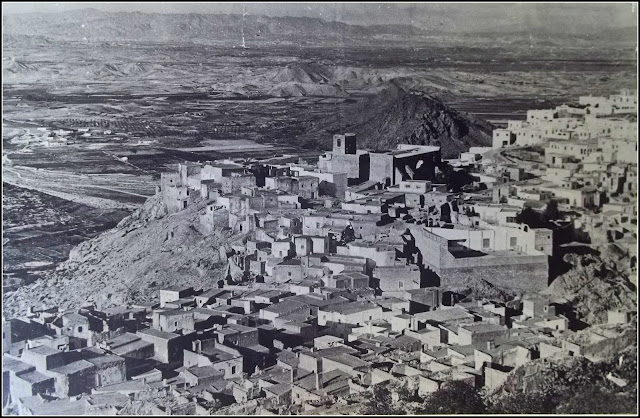 An amazing looking pueblo in the forgotten province of Almería. This picture of Mojácar is probably from about 1962 or so, and shows most of the village as seen from the mountain behind, the Picaccio (which is now adorned with a number of mobile phone and radio antennae). The right hand side of the village is missing, cut just before el Castillo, a castle described in the 1927 edition of a Spanish encyclopedia as 'inmutable' - roughly: unknockdownable. By the time of this picture, the castle had gone - the venerable stones had been taken to build houses, or fill in gullies and streets from the stricken pueblo, which had been largely abandoned since the Civil War in the second half of the thirties. Past the Castillo, now a luxurious home belonging to one of the many early foreigners who had brought the village back to life, the pueblo descends towards the fuente below. In this first picture, one can see the church - an old fortified building dating back to the Sixteenth Century, and just below, the large open-air construction at the lower right is Mojácar's open-air cinema, affectionately known as a 'pipa theatre'.
Behind Mojácar, the dry river bed called the Río de Aguas washes past in the mid distance (every few years, it fills with water from the heavy rains upstream). The surrounding land is dry, inhospitable, and while there are many terrazas from distant ages, by the 20th Century, the land was un-worked. 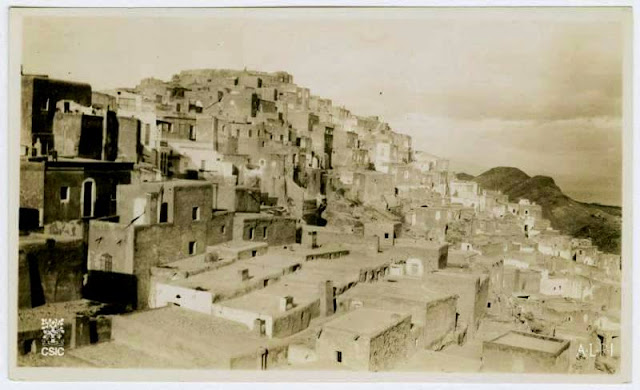 The view moving to the right - seeing the pueblo staring out towards the sea (this picture comes from around 1930) shows the older construction - with paint to highlight the doors and windows (it helps keep the flies out).
Mojácar is a kilometre away from the coast, rising on a hill. This originally helped to keep the town safe from pirate attacks, but meant that the local economy was more agricultural than maritime.
There were few homes on the coast, and the land down there, as late as the early sixties, was used simply to grow tomatoes. It is recounted that the older children would inherit the land or house 'up above', while the younger ones would be left the useless land on the coast. During the lean years following the Civil War, much of the local population left to find a better life elsewhere - and there are Mojaqueros in Barcelona, Madrid and Granada, in France and Germany and Argentina. With the arrival of the foreign wealth, many of course returned.
Don Jacinto, the last mayor of the Franco era, was the  man who brought Mojácar back from the brink. By 1965, there was a modest government Parador hotel on the beach, a very small Hotel Indalo in the village square, and any number of wealthy and always exotic foreigners living in the pueblo, building lavish homes wherever they could, with the paperwork easily resolved by the forward-thinking mayor and his small town hall.

We Will Stay (Probably)

While we are all reeling in shock from the ghastly Brexit and the insults from the British Roundheads, a number of local 'please-don't-send-me-home' groups have been set up by the Britons hitherto living peacefully in Spain, France or other parts of the European Union. I'm in one and have joined a couple of others. We need some energy here, as there is no one (no one!) to speak for us or represent us.
However, we are now beginning to be spoken of and written about (usually with a photograph of fat Englishmen playing pool in a bar full of Union flags - I would never go to such a place) as if we had just been discovered by the British Press, adding fuel to the great revolution sweeping their unfortunate and divided country.
The Brexiteers (the Roundheads) think we are traitors, while the 'Remain Camp' wants us to back them in their politics (and later they will probably forget us again, if the status quo is resolved). For the moment, we are useful to both sides. 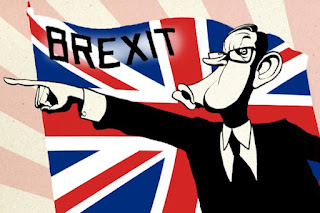 Some of the Spanish town halls have told us not to worry about all this stuff happening so far away, and to get back to our daily activities (swelling the cash registers of the local businesses while being tiresome about the local dogs). The British ambassador has said much the same thing... don't worry. We have it all sorted...
Spain is nevertheless keeping a watery eye on us, while noting with some enthusiasm that tourist numbers (generally manipulated by the INE) are seriously up, as other destinations become less attractive. Ex-pats may have trouble (thanks, Hacienda) in renting out their apartments to this sudden and welcome increase in visitors. Then there's the issue of the declaration of all property, cash and investments outside Spain (Modelo 720). But, as we become an ever smaller part of the invisible export, we are ignored even harder by the Ministry of the Interior.
Which, again, is why we need representation - a Champion.
Things could be bad in the next few years: work-permits, visas, the end of EU-backed hospital privileges, perhaps even quiet deportation - as third world citizens - in some cases.
In my own town, where the Brits largely brought the place to life in the sixties and afterwards, there is still not one sign or street or building to honour our presence. If we were to all leave suddenly, we would be as quickly forgotten as were the Visigoths - another invading tribe from the past.
Clearly, any general threat to pack us all into rusting rowing boats and send us round the Cape of St Vincent and into the Atlantic is just made to scare us, but it's certainly the case that the Britons living in France have it easier - they would only have to make their way to the port of Dunkerque.