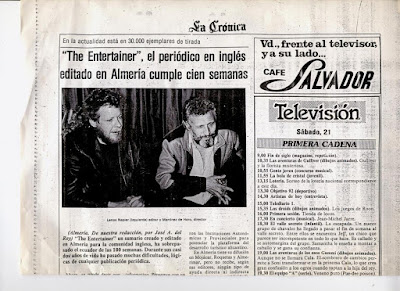 The Entertainer was a weekly newspaper that started in April 1985. It was a 'free sheet' (as they used to call these things) serving the English-speaking population in Almería. This in the days before desktop publication, the Internet and colour printing. The next year, a second edition for the Costa Blanca, and soon after, a third for the Costa del Sol. Spin-offs included 'Entertainer en Español' - a monthly for Almería, and, briefly, another for Alicante. There was also a radio show called 'The Entertainer Show', broadcast from Radio Indalo, in Mojácar and Radio Marbella on the Costa del Sol.
The newspaper was sold in 1999, but, alas, things did not progress smoothly.
I ran a similar-sounding title from November 2003, a monthly called The New Entertainer, with support from a Spanish journalist called Ángel Medina (it ran to sixty issues) while also editing El Indálico (110 issues).  I also wrote/write for Actualidad Almanzora, La Opinión de Almería, Almería Hoy, El Mirador, The Reader, The Olive Press and The RTN.
I started The Entertainer Online (a blog) started in September 2002, when the title for the newspaper was substituted by the new owners. It was a advertising-free blog, with additional pages, including a large number of useful links about Spain.
The blog has continued since then, until early in January this year, following attacks from somewhere (let's suppose it was the Russians).
Briefly, another blog - a simpler one - with the GoDaddy people, but now I suppose it's time to give up and concentrate on my other projects.
Business over Tapas: A weekly subscription news service about Spain (Facebook here).
Spanish Shilling: Essays about Spain, since January 2006
...and now, taking over from The Entertainer Online, Lenox Napier: Local news and opinion.
Posted by Lenox at 9:00 AM 1 comment:

How Many Foreigners? Who Cares?

No one knows how many Brits live in Europe. Perhaps because we don't have any representation - either with a voice in London or in Brussels. This makes us second-class Europeans (third-class foreigners when the UK finally pulls the plug). How many are we? No one knows, because no one cares. Here in Spain, the number of Brits is figured by a voluntary registration in the town halls (called the 'padrón'). This gives our number at an anal 253,928 (INE statistics office January 2016). But many don't register (and some, if they leave the country, don't remove their names). As above - no one knows because we are not worth the trouble. We need a champion!
Since I have the INE page open, here's some other information:
Almería Brits (Jan 2016): 14,344
Total Almería foreigners: 137,507
Total foreigners Spain: 4,601,272.
The largest groups seem to be Romanian 715,136
Chinese: 199,961
Ecuadoreans: Internet broke down (Thanks Movistar)
Moroccans: 753,425

The Palace of Chávarri, Mojácar Playa

The Palace of Cháverri, as it was grandly known, is now the front bit of a huge box-like hotel in Marina de la Torre, run by the Fergus Hotel group and called the Hotel Alegría Palacio. Mojácar has succumbed to cheap all-inclusive tourism. 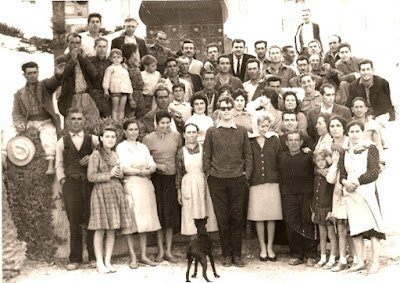 In another time, the palace was a summer-home owned by a wealthy Madrid family called Garrigues-Walker. Old Dad - Antonio - was the Spanish ambassador to the United States in the early sixties, later moving to a fresh posting at the ambassador's residence at the Vatican. His wife Helen was from Des Moines in Iowa and at least one of their nine children, Joaquín, was a regular visitor to Mojácar who, as a story in the Voz de Almería notes, spent his honeymoon with his wife Mercedes there (pictured here with the staff in attendance).
An American friend called Zach Allen stayed with Joaquín in 1956 and sent me the picture below. He writes: '...Recently, I turned to Google Earth and see some of the changes.  The "Palacio" itself was very rudimentary when I was there.  But, beautiful.  At that time, it was a tomato farm.  I have a number of photos showing the house, the fields and the (women mainly) workers who were planting the tomatoes then.  It used a gravity fed irrigation system fed from a very large pool, much like a swimming pool, on the hill in back of the house. The view from the stairway, out through the open (not enclosed like today) archway down the road to the beach was stunning...'. 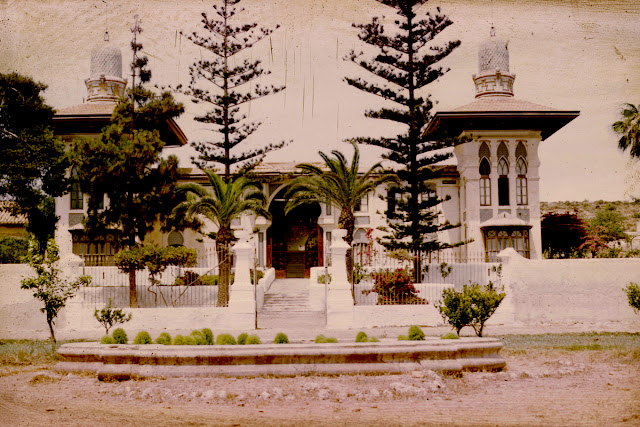 The house was built by the first Marquis de Chávarri (Benigno Chávarri y Salazar), who owned a shipping line. His captains were (apparently) instructed to fire off a cannon salute from their ships as they navigated past the estate on the way to or from the port of Garrucha.
Good times. Mojácar was so far away from the cities, so hard to get to, that many used to come by sea.
Posted by Lenox at 9:36 AM 9 comments: