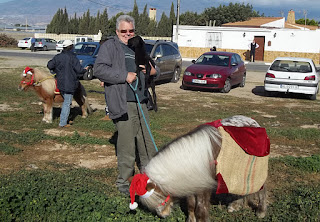 The odd things that happen in Spain. Yesterday we went to Almería to pick up two friends and to continue on to the Province’s other big city, El Ejido. Just along from our first destination is a feed store, so we stopped there for a few things, including happening on a clip to hold the dog safely in the car – the police being very keen on stopping you these days if your pet isn’t properly secured.

Next door at the stables, we transferred to Loli’s car, and four of us boarded along with two miniature ponies and a baby sheep that happened to be loitering nearby. The ponies jumped into the rear of the vehicle without much prompting. Noticing my surprise, Loli told me she once went to some children's pet-show with no less than eighteen critters in her buggy, including ponies, tortoises, chickens, rabbits and a slightly bilious coatimundi.

Today, we were off to a party for disabled children given by a physiotherapist called Beatriz, who with Loli and Barbara, makes up the senior members of Animo.

Loli’s vehicle has tinted rear windows, so our load of horseflesh was safe from the public eye, as long as our passengers didn’t neigh too loudly. Unfortunately, one of them was minded to produce ear-splitting whinnies through most of the trip, which included the part where we drove across the city of Almería.

I had the window down (to combat the smell – Dutch ponies can be stinky in confined quarters, especially after breakfast). We arrived at the lights at one point just as another shriek came from somewhere in the rear of the vehicle. A man in the car next to us looked up in horror. All he could see was Loli and me. ‘She’s had this cold for weeks’ I told him gamely ‘nothing seems to shift it’.

It was a good day with the children in El Ejido. We gave them rides on th 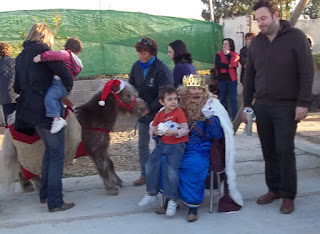 e ponies and told them stories about the sheep, a black and white male that stuck firmly beside Loli during the entire experience, as if his friend could somehow explain what the whole thing was about. A Wise King showed up towards the end of the afternoon and pulled presents out of a sack on the back of one of the ponies. Each child got a calendar decorated with his or her photo (I got one of me posing with our chicken, Maude). Barbara and Loli, co-writers of Manual Básico de la Hípica Terapéutica, both received hard-covered printer’s copies of their book.

Once again wedged into the car and lulled into drowsiness by another sustained chorus of bellows, we returned safely past any and all police check-points to the stables in Almería and, transferring to our vehicle, we continued home, the car full of tomatoes from El Ejido, some grain for our horses and a box of mixture for Maude. 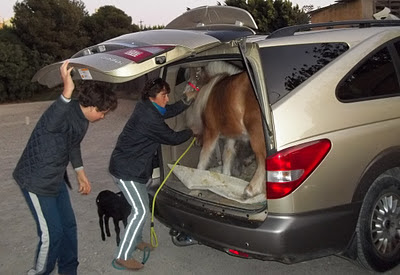 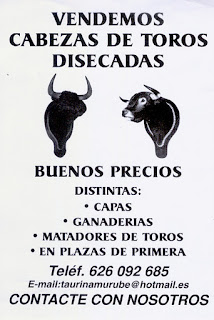 The age old problem of 'what to buy someone for Christmas' has just been answered. A stuffed bull's head. These are not just any old bulls, these ones come from the top farms, breeders and some of them even met their ends at the hands of a famous bullfighter! Imagine the jolly stories you can make up as you swirl your glass of wine and ripple your pencil-thin moustache.
When I was around nine or ten, I came to Spain for holidays with my parents. We went to Playa del Haro (as it was comfortably called in those days) and saw a thrilling bullfight in Gerona. I got a large raffia bull's head to crown my experience and it decorated my bedroom in England for the next few years.
I found this flyer at the Sicab horse fair in Seville last month and thought that it would interest those Gentle Readers who don't like raffia. So there you are, your very own genuine stuffed Bull's Head.
Posted by Lenox at 2:05 PM No comments:

The Siege of Mojácar 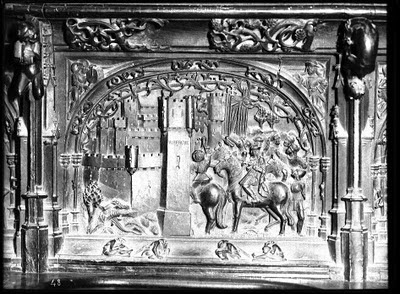 It seems that this retablo, showing 'el asedio de Mojácar', is in Toledo. The wooden carving was made by Rodrigo Alemán (1470-1542) and the picture is part of a new collection of historical photographs held by the Ministerio de Cultura and the Instituto del Patrimonio Cultural de España. The 'search page' is here.
Mojácar was attacked in 1488 as part of the final surge against the Moor. The fortified town either gave in after an agreement between the alcaide and the Christian leader that they would all get along peacefully (the disneyesque version suggested by a plinth at the fuente) or the more historically accepted version is that the whole town was put to the sword and repopulated by 400 properly Christian Spaniards from Lorca.

A slightly neglected copy of the retablo, made in 2004, is affixed to the back of the Mojácar church.
Posted by Lenox at 6:13 AM No comments: 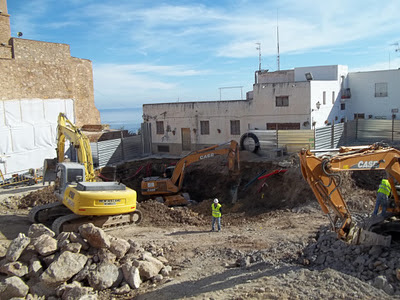 All this for 37 cars? That's not someone who cares for Mojácar.
Posted by Lenox at 2:49 PM No comments: 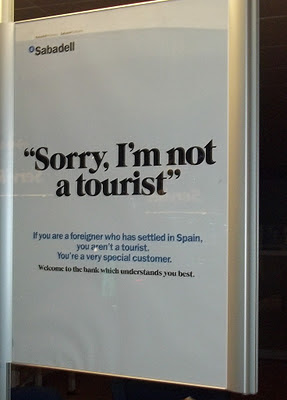 Full marks to the Banco de Sabadell. I know that they are merely after our savings, but it's not often that you see an acknowledgement towards the foreigners who are living here full-time rather than those who are enjoying a short holiday here (and yet seem worthy of the spending of millions of euros in their pursuit). Tourists, you see, have no reason to be loyal. They'll take their next holiday somewhere else.
As the bank manager knows, there is a huge amount of money being pumped into Spain by those foreign settlers. There would be a lot more if the politicians woke up.
Posted by Lenox at 10:00 PM No comments:

The Nice Picture from Carboneras 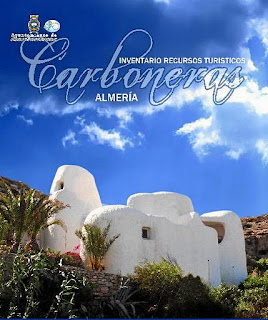 There you are, leafing through the various catalogues, magazines, webpages and so on, in search of that vital holiday: as guaranteed by the State and your Employer both. Hard work for fifty weeks means a fortnight of some rest and relaxation to compensate. Where to go?
There are the tried and true holiday destinations, where you pretty much know what to expect, having perhaps been there before, or from hearing reports from your work-mates. There are farther away resorts, with new and cheaper offers: well, why not?
There are new places as well, perhaps more exciting, or adventurous... and won't those same work-mates be jealous when they hear about your discovery?
So, Carboneras. It's a small fishing port in Almería, just along from Mojácar. It has some good and cheap fish restaurants and a castle. There's an attractive bay and some famously wild nudist beaches. The tiny and pretty village of Aguamarga is just next door. Carboneras also has, as you can see from the picture, a splendidly odd sculpture cum farmhouse, built in the early sixties by a Belgian who ended up being eaten by a tiger in Bengal.
But here's the thing. The Carboneras Tourist Board has to work with what it's got, which in this case is the most polluting power station in Spain (according to the European Environment agency) which, by the way, was cropped from the above photograph. The massive plant, accompanied by another behemoth, the Holcim cement factory, are within scant metres of the above oddity - jus' saying. The town is also known for the Hotel Algarrobico, an unfinished 22 storey hotel where completion was put on hold several years ago by the Ministry of the Environment because it was built both too close to the sea and also in a national park, breaking two planning laws in the event. However, with politics, inertia and a whopping demolition bill, no one has actually got around to knocking it down.
Carboneras isn't a bad place, the food is good and the people seem nice, but is it really the best choice for a holiday? Perhaps not.
Posted by Lenox at 10:20 AM No comments: 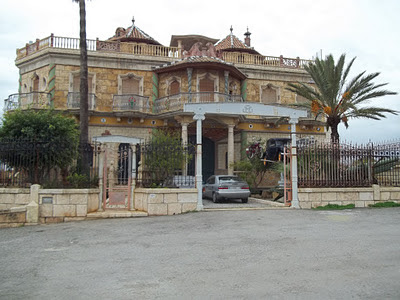 So, what's this? A mansion in El Ejido, the Almería city famous for its farming under plastic and opulent wealth. The owner of this tasteful looking house, in a clear homage to the past, has seen fit to decorate his garden with a selection of mechanical hardware, including an old Moto Guz 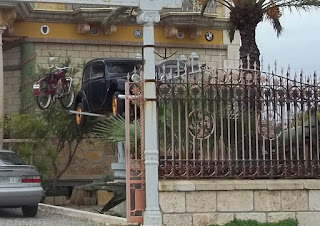 zi 98cc with a stick shift hanging from some chains, an antique 1950's Citroen stood on a plinth, and just inside the garden, to the right, an artillery piece. Is that a bit of a airplane disappearing around the corner? One day, I'd like to see inside the house!
Posted by Lenox at 8:57 AM No comments: