Title and article removed by Court Order!
Posted by Lenox at 2:34 PM 6 comments:

There was one town that produced ten parties in the 2003 local elections - a fairly large town in Cadiz (Sanlucar de Barameda). Three or perhaps four being the more usual number.
Mojácar managed nine (PP, PSOE, IU, ASIZ, GIAL, PA, NGM, Mojacar 2000 and PSA - the last two not getting any councillors) and, with the (inevitable) coup d'étât held in 2005 (the four parties in power were dislodged after one member of the PA was persuaded to 'cross the floor' and seek his fortune elsewhere), we now have the curious mixture of 2 socialist PSOE (not supported by their own party secretariat) running the town hall and supported by 4 PP conservatives (the leader of which had earlier been in the PSOE and was instrumental in another coup) plus, of course, the turncoat ('transfuga') now in the 'non-aligned' or Grupo Mixto party. Which makes ten.
Meanwhile, one of the PP has died, and the ex-mayor (ASIZ communist, allied with the Right Wing GIAL, the NGM and the nationalist PA), right after announcing he was joining the PSA... has been forced through ill health to abandon politics.
So now the PSOE mayor (supported by the PP, although the pact has not received support from the Almerian PP - understandably) is coming up to a year in power. There's one final year to go in this legislature and, one can't help but wonder...
Will the PP leader be given her chance to be mayoress?

Certainly, few of the above worthies will have much more active politics left in their futures... One can only hope they have other plans...

What will happen, too, when the foreigners decide to vote conscientiously? In Mojacar, better than half the potential voters in the local 2007 elections will be British residents. Assuming the padrón (from which comes the voting list) isn't re-examined...
Say again, what will happen if the Rumanians get the vote?
Posted by Lenox at 4:23 PM No comments:

The last entry on this site touches on the T-junction at Mojacar’s fuente. It’s narrow, blind and dangerous. There are two zebra crossings just off it (both dedicatedly ignored by the local inhabitants) and there’s a bus-stop right on the junction itself, causing the traffic to stop while passengers alight, climb on… or ask the driver for directions. The right-of-way changed a couple of years back so those coming up from the beach going towards the pueblo have to give way to oncoming (blind, round the corner) traffic.
As some bastard failed to do to me this afternoon, missing the front of my old banger by an inch. Quite a shock. I’m gonna have a drink now. And then go driving…
Posted by Lenox at 5:42 PM No comments:

The Road to Mojacar 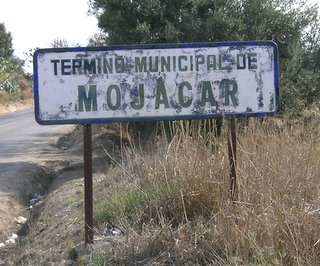 Welcome to Mojácar. You have just left (the quite simply glorious) municipality of Turre and are heading towards the coast. The road is full of pot-holes and curves, but, in a few kilometres, you will arrive at the fuente where you can turn left towards the playa or right towards the pueblo.

The road was built in 1950 and has received little attention since. It is narrow and dangerous. The last bit goes through a populated area where the huertas are and this final half kilometre or so is heavily used by pedestrians. There is no pavement and a cliff on one side and a drop on the other make it an alarming place to walk, especially if you are dressed in black and on your way to the cemeterio on a visit.

The fuente junction features two zebra crossings, a blind corner and a bus stop. Right on the road. There's nowhere to pull off. This is also the location for the Sunday flea-market where parking is chaotic. The current plan is to make a rather small and cramped roundabout here.

The road is heavily used as it takes both the Turre traffic and also completes the one-way system through the pueblo. The pot-holed, narrow and serpentine road is not safe and the diputación (county council) seems to lack interest in widening it and building either a pavement or an alameda (a separate pedestrian pathway). They have, however, fixed the Turre high-street so one can always live in hope.

It falls to the Mojácar ayuntamiento however to solve this problem. They can either oblige the diputación to come in or they can incorporate the road, or at least the last bit of it, and make the necessary repairs themselves. The money (our money) is certainly there, but appears to be earmarked for rather more exotic use: like attracting visitors rather than attending to friends.

If you have made it this far with your researches on Spain, you may want to carry on a bit further, to find another blogsite, this time about helping the less fortunate, the physically, sensorially and mentally challenged. It’s kept by Barbara who worked for many years in Almeria in ‘Animal Assisted Therapy’, after working in the USA in various projects - particularly with children who needed special attention. She worked with dog training programs for the deaf, with ‘handi-dogs’ and she rode horses. Since a small child, she always rode horses – bareback at that!
Back in around 1988 here in Spain, she introduced hippotherapy to the country, which responded by attending her seminars in Mojácar, following her ideas at her centre ‘Animo’, which had around forty volunteers and as many ‘students’ (no charge). She was fêted by the charities here in Spain, particularly those in Almeria City, who promptly followed her ideas, copied them, and re-tabled them as their own (one charity taking 90,000 euros from the government for a proposal based on Barbara’s work).
She kept eight horses, four donkeys, wild boar, sheep and goodness knows what else. She travelled to Madrid, Barcelona, Albacete, France, Switzerland and Germany to give speeches and attend international conferences with, for example, the FRDI (International Riding for the Disabled Foundation). There wasn’t any official help for these activities, and someone stole the tins we left in the bars.
Many charities in Spain enjoy a sinecure, a position which provides jobs and security, and for the senior staffers and wise old-timers, a new car every couple of years, position, notoriety and wealth. Not much work, necessarily, but a steady income and few criticisms. Even when they swipe things. We know of:
A charity which places jobs for the disabled, and takes 20% from the employee – for the life of the job.
A national charity which sells off properties and pinches the money.
A national charity that forces another national charity to close down part of its operations.
A charity which works with wheelchair users on the second floor of an office-block. No lift.
A charity which takes children from the Sahara, only to return them as the accountant has walloped all the money.
A charity that doesn’t use trained personnel.
And so on.
Of course, there’s more to it than that. Collecting money in government grants is time-consuming, competitive and labour intensive. The nation is partial to its paperwork, and no where truer than in the search for funding.
There are agents who will do it for you – for 20% of the pot!
There are, of course, many wonderful people to be found in this field, selfless and extraordinary people working in fine organisations. Médicos sin Frontera, Sac Xiroi and Asprodalba (Vera) being just three very different but entirely magnificent examples.
However, a few bad apples…
Barbara doesn’t write about that stuff on her site, she prefers to concentrate on how animal assisted therapies can work, for whom, how to do it right, the dangers and the triumphs. Find her site at http://animospain.blogspot.com/
Posted by Lenox at 12:58 PM No comments:

Almería: So many Houses

The main income for a town hall, where its projects, dreams, plans, trophies… together with those massive wages and social security payments for the (usually) swollen civil servant force… come from the ‘urbanismo’ department. Granting building licences, collecting property taxes, selling off odd bits of public land to developers (for sometimes decidedly bargain rates) and receiving incentives and occasional bequests.

Planning or building should never be a haphazard affair, and town halls are meant to produce a General Plan to drive the municipality forward for the life of the plan, which is for eight years. Since General Plans tend to ‘lock in’ the way forward for the urbanisers, these documents are hard to reach consensus, and many a town hall has ‘fallen’ before these agreements can be ratified and cast in stone – or, rather, concrete (viz. Mojácar three times in the past 20 years).

These plans, once thrashed out by the Good Ole Boys, are then sent to Almería for approval, or redesign.

Imagine if the town hall plans -the PGOU’s - for the entire province of Almería were accepted by the provincial representative of the Junta de Andalucía. We would have – instead of the current 600,000 inhabitants, somewhere around 7,600,000 of us by 2013. Here are the proposed populations (gleaming in the developers’ eyes) in eight years time for a few of our local dusty, dry and sleepy villages.

There is a debate going on in the province at the moment as to the advisability of building so many ‘homes’. A debate between politicians and builders, urbanisers and property owners: in other words, an excellent cross-section of our community!

Almería is already the fastest growing province in Spain, with 44 new houses per thousand population built in 2005 (compare the second ‘fastest’ province, Guadalajara, at 19 per 1000).

While the residents currently living in those communities are, presumably, reasonably content as things go, increasing the numbers of neighbours by a factor of twenty is not going to improve the quality of life of those who have chosen this province to live their days in, nor, indeed, the quality and quantity of their water, their views, their safety and their society.

Those residents who fail to register themselves on the padrón – the town hall register – are partly responsible for the lack of existing services, whether taxis, policemen, doctors, teachers or – in point of fact – English-speaking personnel (or even, blow me down, British-born personnel) working in the public sector.

The padrón accounts for the number of population. Each person counted allows some small extra funding to the municipality from the government. There is more road-works for the ‘larger’ towns, more help, promotion, more aid and importance for those communities.

A ‘tourist town’ always suffers in some degree from having its population numbers (and therefore its services and funding) being rather lower than the reality. By having a number of residents not bothering to support their community – to their own disadvantage – the problem is shamefully compounded.

In Almería, there are officially 9,800 Brits. The British consul, on the other hand, reckons there are 25,000. That’s better than half of all the British citizens living here not bothering to support passively their adopted communities.

To register on the padrón, just go to your town hall with a copy of your passport, and your escritura or a long-term rental contract. The information is not passed to the tax authorities. Repeat: ‘not’!

Finally, if you are worried about your town growing into a giant residential monster in the years to come, you could be re-assured by being on the padrón, as this puts you (if you are European) onto the voting register: and there are local elections in 2007.
You could vote for moderation.
Posted by Lenox at 12:00 PM 1 comment: