Most of those who arrive here like to read.

We know people who don't, and good luck to them, but as someone says - they only gonna live once, while we will live a thousand lives.The life I'm living at the moment isn't a particularly rewarding one - I'm on the back of a truck, a Hudson Super Six, shuddering slowly along Route 66 on the way to California during the Depression with a couple of families of Okies who were unable to pay their rent on the miserable acres of dust where they had lived raising cotton. The book of course is John Steinbeck's 'The Grapes of Wrath'. We have good moments and bad moments in our journey along a thousand lives - right now, we've just lost Grandpa.

When we first moved to Spain, long before TVs, PCs and Kindles, we brought half a ton of books with us.
I, at a tender age, was in charge of them. The few foreigners who lived in our town in those days - the ones that liked to read, I mean - would drop by and borrow a few books and, sometimes even return them.
Our collection leaned strongly towards tripe, and I remember the sensation of one year was a book called 'Mandingo', which involved a very well-endowed slave and an endless number of southern 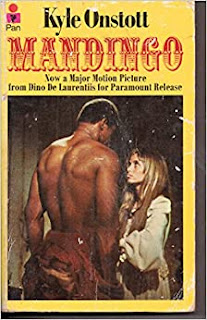 daughters. I see it was written in 1957, but our copy, from the publishing house of Pan, would have dated from around 1968 or so.  The author, Kyle Onstott, wrote a few more in a similar vein (as one does, when one hits on a winner) and they all found safe harbour on our shelves.
There were many thousands of books, occupying an entire room in the house, plus the book-shelves that lined the sitting room and dining room.
The lavatory in the Smallest Room had a table beside it with a few decorative and useful items, including an ashtray, a dried up geranium, and an autobiography called 'George of the Ritz'. George used to welcome customers at the door of London's most famous hotel and would palm the notes of the realm that came his way from the rich and famous. This, on his retirement, formed material for a book - and an honorary place in our bathroom. I picked it up the other day, and found to my surprise that most of the pages were missing - there were just a few photographs left, printed on non-absorbent paper.
One day my father decided to turn over several hundred of our volumes to the newly-formed British library (I've had an honorary membership ever since). Of course, the freed-up shelves at our house slowly filled with more books as they do (including a few, shall we say, late returns?), and, many years later, here we are.
My daughter says that she wants to keep the hardbacks (probably for decoration. Huh), but I have to clean out or at least manage the paperbacks.
Bottom line, I've got a number of boxes to go through.
A few years ago, my wife made me throw out some books, and I remember sorrowfully bidding goodbye to Fodor's 1957 edition of 'Amsterdam', which I was quite happy just now to see had somehow been reprieved and was once again in my possession. Either that, or I might have had a second copy.
Some books do need to go, of course, including Langerscheidts Musterbriefe's 'Muy Señor Mío - how to write a nice letter to a Spaniard'. It's in German, a language I don't speak, and - hey, who writes nice letters any more to anyone? We have email now. Hola and Un saludo will get you everywhere.
I also found 'Truants from Life'. This has the complete case histories of four disturbed children who could not be helped by the ordinarily available methods of Psychotherapy.
Anyone?
There's also an Agatha Christie mystery with the last page missing but I'm pretty sure it was the Butler who did it.
So maybe a few will have to go this time.
Back in the boxes I found an excellent novel from Nevil Shute, which I read just this past weekend, and piled next to the bed in a holding pattern there are currently books from Eric van Lustbader (kung-fu and lots of sex - a sort of 21st century Mandingo, now I think of it), James Lee Burke (a terrific American detective-novelist) and Eric Newby's 'Round Ireland in Low Gear': a book about an elderly couple on bicycles looking for a place that serves both Guinness and a Pink Gin.
I just found a book from Erich von Däniken, who was very popular in Mojácar in the seventies. His thesis (written while in jail for debt) was that Man came from Outer Space and he has some blurry photos from Peru (probably swiped from the prison library) to back this up.
I think he may be right.
It would explain the Indalo.
The other day I went in to Almería to the Picasso bookshop and picked up a couple of clean virgin unread books (for a change) from their English section downstairs. New books cost around twelve euros each these days. Then on Friday I was in Turre and dropped by the charity shop. I bought a dozen books from them (all of them corkers!) for the bargain total price of two euros (don't for Goodness Sake tell my daughter).
That works out at 72 books from Turre would cost the same price as just one from Almería.
Hmm. 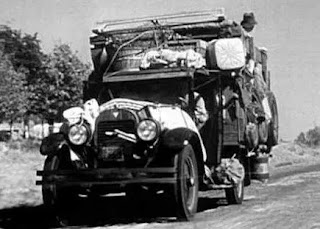 I've never cared for the TV, and - while I learned Spanish by going to the movies (my first words in castellano were 'hands up!') - I've had to give up on the pictures since they don't make 'em like they used to, you can't smoke, and the local open-air cinema is long closed down: sold to a speculator.
With a book, of course, the world is yours to make of it what you will.
Although they say the film from 'The Grapes of Wrath' was very good (here's the old car turned into a truck), the book was better. It won the Nobel Prize for Literature.
Five more boxes of books to go through - and I suspect that my daughter has found some more that I thought I had safely hidden up in the attic.
Posted by Lenox at 9:15 PM No comments: