...and if you spell my name wrong - as many people do, then - there are seven combinations of those as well: 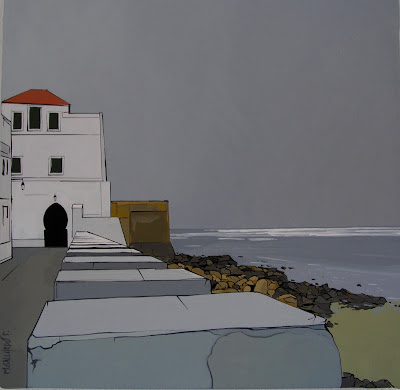 Our area has long been seen as attractive to artists, but here's a local artist born and raised here. The text is from Jeanne Henny.
This exhibition is journey through landscapes, from the natural park of Cabo de Gata, passing through Cortijo del Fraile (Cortijo described in Garcia Lorca’s well known work Blood Wedding), to the whitewashed facades of the salt mines, the unique vistas of Bedar, Tabernas and the film sets, the architecture of Morocco and others.
A personal style infused with Mediterranean light. An illustration with a touch of realism inspired by the simplicity of shapes and forms.
Manuel Gallardo was born in 1981 in Los Gallardos, Almeria. He is a self- taught artist and aficionado of photography and sculpture. His works were selected for various art competitions, such as Roquetas del Mar, Lucainena de las Torres, and Vera among others. In June 2006 he was awarded First Prize by the Deputation of Almeria in an open air painting marathon in Los Gallardos. He has exhibited some of his works in the Museum Antonio Manuel Campoy in the Exhibition Hall La Tercia del Casillo del Marqués de los Vélez in Cuevas de Almanzora. This is his first solo exhibition.

How often we worry about communicating. In Britain there are many different accents and slang, which help to breed a sense of belonging to a community as well as presenting a challenge to anyone outside it. Which is why the young need to re-invent themselves every generation. In Spain, there’s plenty of slang, but spoken Spanish is pretty much easy to understand wherever you come from, with the gypsy accent and the Cadiz accent being perhaps the hardest to grasp, although, apart from the dropped constanants and a few bits of slang, they are intelligible enough. The gypsies talk of their special language, Caló, but no one appears to know more than a few words of it. Rather like me saying something remembered from my Latin classes.
Yup, in Latin they call that table ‘mensa’.
To make things comfortably more complicated, Spain has some regional languages that are been encouraged – or so it seems to me – so as to bring the local politicians into the centre of power. We all know that the Catalonians have ‘Catalán’, the Valencians have ‘Valenciano’ (which is the same as Catalán, but don’t say I told you), the Galicians have ‘Galego’ and the Basques have something that has nothing in common with any other language: it’s called in Spanish ‘Euskera’, while in the Basque country, it’s called ‘euskaldunak’.
Then those living in eastern Almería have something even odder – it’s called ‘English’…
It seems a pity that everyone living on the Iberian peninsular, Portuguese and Gibraltarians included, couldn’t all speak one language, but there you go. In a generation, few people in Barcelona will speak more than broken Spanish, and fewer still of the Galicians will be able to make themselves understood when they take a shopping trip to Madrid.
And as for the Basques…
The other day, three young cousins of my wife arrived to stay. You know how it is; a quick email and they’re on your doorstep the following morning. They were backpacking around Europe for a month before completing their studies in a university in Washington DC. They spoke, of course, American.
Actually, they didn’t, because they were deaf. They signed in American: although they dropped their vowels, invented meanings, used their own slang and were otherwise difficult or impossible to make head or tail of. They signed too dam’ fast and they never stopped. Don’t talk with your hands full, I wanted to tell them at the dinner table. Here, try some of this…
Oddly, you begin to pick it up rather fast – or, at least, your own version of it, even as you wonder exactly who here has the handicap!
Of course, they would write things down for us and were great fun besides. Being energetic young kids, they drank and smoked like troopers and stayed up late with my son and his friends on the Playstation. With fingers like that, said the kids, it’s no wonder they keep winning…
On one occasion during their short visit, three of us: a Spaniard, my son and I, together with the three of them, went out for a boozy dinner – hands and fingers flying – in a pork and chips place on the beach, the other tables staring and wondering who we were, you must try the Licór de Pacharán and so on; and we followed this with a trip to our friend’s house where we drank a bottle of whisky, never stopped talking for a second, smoked ourselves blue and generally partied until dawn. Yet, all the while, you could have heard a pin drop.
The neighbours didn’t bang on the walls, we didn’t shout and bellow as we left round about sun up and the loudest sound would have been my stomach churning.
They went off to Madrid on the six o’clock bus to go to some important international congress of signing as delegates. Several hundred of them let loose in Madrid.
Blimey, that must have been a riot!
Posted by Lenox at 6:12 PM 1 comment:

Greenpeace and the Illegal Hotel 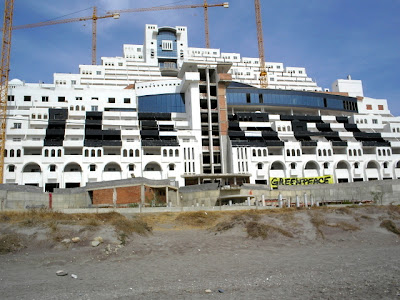 Around thirty Greenpeace activists arrived in a dawn attack on the beach of El Algarrobico this morning, Thursday, and proceeded to paint in giant letters the word ‘ilegal’ on the front of the unfinished hotel there.
The Hotel El Algarrobico has been built – it’s almost finished – in a national park and is also on land controlled under the jurisdiction of ‘Costas’ the coastal agency where strict ‘no building’ rules apply.
How the hotel got as far as it did – even with the support of the Carboneras town hall (PSOE) – is a mystery. However, it was stopped two years ago by the Ministry of the Environment.
As to what needs to be done – no one wants to get their fingers wet. The price to the government would be at least 50 million euros to expropriate and demolish the installation, plus more money ‘to return the land to its previous condition’ – land which is/was scrub and cliff-face and certainly not worth much to regain.
The Carboneras town hall continues to support the builders, Azata del Sol, and they are trying to put things in order, an impossible task for this construction.
The unfinished hotel at 21 stories and with 411 rooms is considered by ecologists (including Greenpeace) as being the symbol of over-construction, illegal builds, greed and the rest of it. The Spanish Mediterranean coastline, according to the ecologists, has 66,000 illegal constructions, but nothing to compare with the Hotel El Algarrobico.
Posted by Lenox at 6:42 PM No comments: 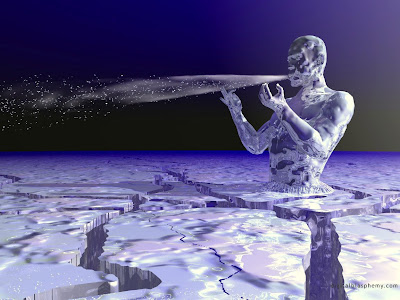 This is a strange summer - it's been hot, with that sticky and uncomfortable type of weather that leaves you in a bad mood (which only a cool beer or a refreshing swim can cure) and, sometimes it's been quite comfortable, like now.
The air conditioning in the office is on the fritz, but we are on the third floor with a few open windows. The air/con in the car needs re-filling (the kind of job I shall no doubt get around to sometime next November) and I've never got around to installing one at home. But with thick walls and small windows, the house takes a lot of cooking before it gets warm inside.
Anyhow, here's a nice piccy.
It'll cool you down.
Posted by Lenox at 6:16 PM No comments: 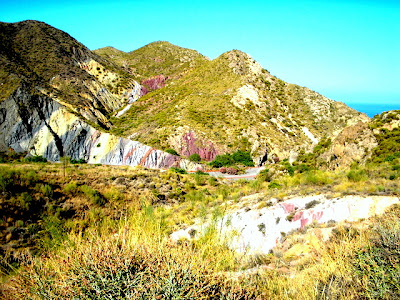 This is a picture of 'The Moors Blood', taken on the way between Sopalmo (a hamlet west of Mojácar) and Carboneras. Perhaps this is where the final battle took place between the Moors and Christians all those years ago. Perhaps it's just an example of the rich and varied minerals in the rock hereabouts.
Posted by Lenox at 2:30 PM 2 comments:

Mojácar Events for July and August