The AVE from Granada to Alicante 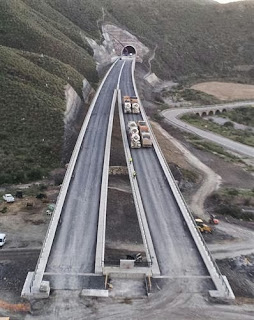 A piece in Sunday's Ideal on the high-speed train route, known as the Mediterranean Corridor, which is pretty much stopped: 'Currently, the corridor progresses in four speeds.  Between Cartagena and the French border a conventional gauge line exists and the Government is committed - and has already tendered sections - to implement the third rail that will allow the circulation by the same route of European gauge trains, enabling a greater alternatives in the Levante from 2016. Between Alicante and Murcia, the works of the AVE are going well. There is a commitment from Mariano Rajoy that the first high speed train will arrive at the terminal of Murcia train station in 2015.
For the Murcia-Almeria section, things aren't so good. There are hardly any works currently underway. The sections which were being built have now been completed. And there are no new tenders laid down despite the fact that here in Almería there is no railway alternative - as there is in the rest of the Mediterranean corridor - and, therefore, this is the only section that stops trains from Algeciras reaching Barcelona along a coastal route. And finally, the Almeria-Granada section, whose feasibility study has been publicly shown, has yet to be approved and continues with studies on the environmental impact of the route, being the most delayed of all the sections there are in the corridor'.
The Almería to Murcia route, half built at least along the Almería to Vera section (picture), has stopped work entirely and the section won't receive more investment until 2020, by which time we shall all, no doubt, own personal flyers... The interest paid on this section, by the way, stands at four million euros per annum. Nothing better to spend our money on - like the abandoned Albox to Huércal Overa motorway or the equally dead double-lane Vera to Garrucha road, where work hasn't continued since 2008?
Lastly, a critical piece in the Spanish press notes that every time a passenger takes a ride on the AVE, he is subsidised by the tax-payers. Wouldn't Almería do better with an ordinary train service, that served the province, rather than an expensive and potentially underused bullet train?

Later: The national budget for 2014 supposes 100 million euros for the railways for the Murcia-Almería Mediterranean corridor, according to La Voz de Almería. The section will be finished, claims the paper quoting the Government, in 2018!. The PSOE are giving a date - las cosas como son - of 2025.

Later: An item in Ideal (16 October) says that the work on the Almería section of the AVE are currently at 60 million euros over budget... A mere bagatelle!
Posted by Lenox at 8:06 AM No comments:

Anniversary for the Priors 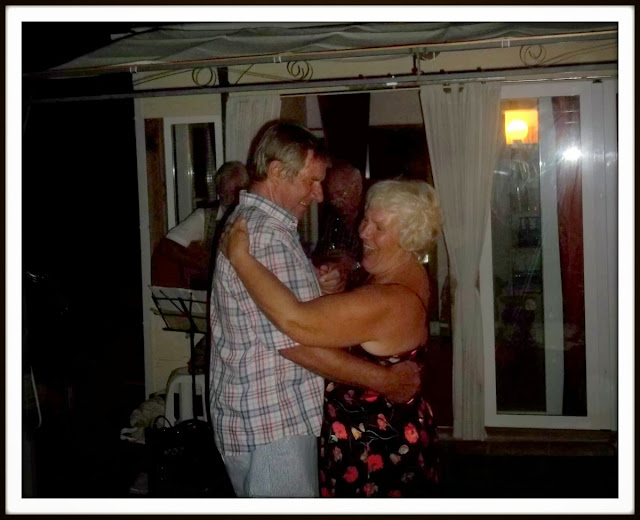 This is Len and Helen Prior. Their house in Vera was demolished 69 months ago by some shits in the Junta de Andalucía, and they have lived in their garage ever since, with hosepipes, batteries and candles. Last night, they celebrated their fiftieth wedding anniversary...
Posted by Lenox at 12:47 PM 1 comment:

The Rather Brief, yet Exceedingly Independent Republic of Albox 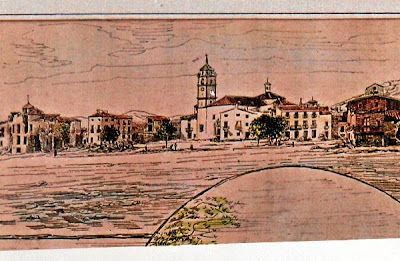 At the end of the 19th century, Albox was a town unknown to much of Spain, and therefore to the world. Until 1891, that is. The nearest railway station was a two-day trip and an outdated industry of wool and fabrics for farmers made it possible that many families managed to live frugally. Nevertheless, the population - close to 11,000 people - meant the town was booming and its wealthier citizens could spend time in one of the two casinos that the town boasted, or enjoying a show in the theatre.


At the time the Mayor was José Antonio Mirón Jimenez. "Conservative and influential", according to Miguel Ángel Alonso, a local historian who has rescued one of the most picturesque events of the history of Albox and revives this story of the times...
Local elections complied with the requirements of the time, that is, they were heavily controlled by the local poobah, whose motto would be: "For friends we have the favour and for enemies we have the law." Which worked very well for Don José Antonio. The mayor (they used to call people like this 'El Cacique') ruled thanks to the vote of the wealthiest residents. In particular, to a coterie of 54 persons, who thanks to the specialized voting system of the times were all those who dictated who would occupy the Mayor's office.


But in 1890, a new national party called the Partido Liberal Fusionista revolutionised the political landscape by introducing universal suffrage to Spain. All men over 25 years could vote in the elections. Coinciding with the modification of the voting rules, a humble resident of the Albox neighborhood of Locaiba, Andrés Pio Fernández, ran as a candidate for the elections of February 1891. The conservative mayor never believed that his opponent could pose a threat. However, he was quite wrong and was soundly defeated. The people speak, although their voice is not always accepted with pleasure (nice quote from the Voz article, couldn't resist). But then, the morning after the election day a storm of people surged through the streets waving sticks, guns and swords. Yet, worse than the weapons they were carrying were their banners: "Long Live the Federal Republic of Albox!". At the head of the mob was none other than the defeated former Mayor.
Don José Antonio (now, where have we heard that name before?) and his accomplices proclaimed a "universal declaration of independence and a brand-new country" which would have "nothing" to do "with Central Government in Madrid". The experiment, based and inspired by recent events occurring in Cartagena (they declared independence from Spain on July 1st 1873 and entered into a five month war with Madrid) didn't last long in Albox.


After two days "of terror", the provincial Governor realized that what looked like a joke had little humour about it, so he proceeded to send the Civil Guard troops to regain control. Twenty one rebels were detained, although they were soon released. It was the end of the first - and short-lived - Federal Republic of Albox.
Posted by Lenox at 12:19 PM No comments:

The Online Story of The Entertainer 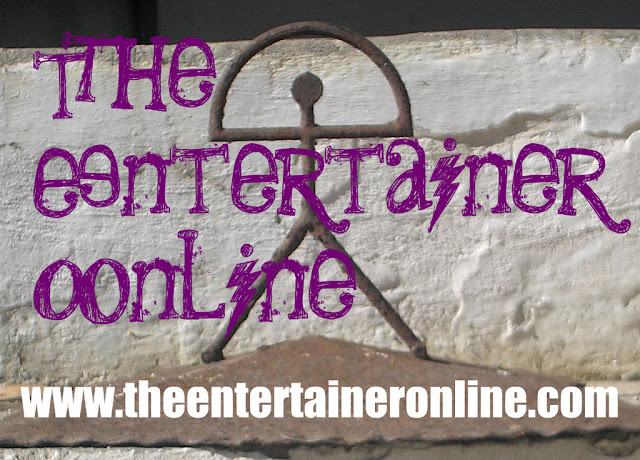 The Entertainer Online - News for residents and friends of Mojácar. Updated regularly. Large non-commercial list of useful links about Spain. Since September 2002.

The Entertainer Online is a blog which goes back to 2002. The webpage - or rather a webpage called 'The Entertainer Online' - as the Internet version of the newspaper 'The Entertainer' which I ran from 1985 to 1999 - goes back further still to March 1996 (here's one at the 'Wayback' dated from November 1998). I think we were about the first foreign paper in Spain and maybe the sixth Spanish one to have an Online edition.


Here's an article from the Webpage from 1998 (how much of it remains true today?):

Living in Spain - the Foreign Residents

While figures for the foreigners living in Spain are hopelessly inexact, it is known that 1,200,000 properties are registered in Spain as belonging to foreigners. This figure gives an approximation of 3.6 million foreigners, at three per property, with some relationship with the country. Surprisingly, the Spanish authorities themselves appear to be indifferent to the numbers, and even to the income derived from this group. If we accept the low figure of 600,000 English speaking residents on the Costa Blanca and in Andalucia, who each spend £1,000 per month - a not unlikely figure which includes a percentage of their house and car price, their taxes and purchases - their annual spending power would come to £7,200 million (*about 9 billion euros as of 15 yrs ago). All brought in as foreign exchange.

The Spanish authorities would be well advised to consider this form of 'tourism' and to encourage its growth.

For a foreigner, living in Spain is now far easier than in the past, particularly for EU citizens. 'Work permits' and 'residence permits' are now just a formality, since all Europeans have the right to live and work where they will inside the European Union. However, the majority of foreigners who live in Spain are, of course, retired. They have lived a full and fruitful life elsewhere and have decided to retire to what can only be described as the warmest, safest and most comfortable part of Europe - the Mediterranean coast of Spain and her islands. They live in or near the small towns dotted along the coast, away from the cities, and evince little interest in returning 'home' again. Those that do eventually move, move inland into the 'real Spain' - to the Andalucian hinterland or elsewhere.

The Mediterranean coast of Spain could be likened to southern Florida twenty years ago - a place of opportunity, beauty and tranquility (well, it's a lot prettier!). Many foreign-run businesses now operate along the coast and in the islands with everything from dentists and doctors to English food supermarkets, realtors, builders and, um, newspapers. There are theatre and choral groups, clubs, associations, golf, bowls, water sports... life need never be dull. Spain itself is a fascinating and beautiful country to get to know, and residents make keen travelers. Certain foreigners have already voted in local elections, and by May 1999 - the time of the next local vote - all European citizens resident in Spain, and possibly all non-Europeans as well, will be able to vote. This will give the foreign residents a greater say in how their community is maintained and developed, as well as better protection from the occasional town hall 'excess'.

Communications in Spain have improved dramatically in the past few years, and there is now a coastal motorway that runs from the French border, down through Barcelona and Valencia, and along the Costa Blanca and Costa de Almeria. This motorway will soon be completed on down to the Costa del Sol and Gibraltar. A second motorway through Granada currently connects with Málaga and continues to 'the Rock'. The rail-system is adequate, but slow, with the exception of the high-speed AVE link between Madrid and Seville (and on to Cadiz). Air-links are good, with airports in every main city, plus Gibraltar, although it must be said that the Almeria airport is a 'horror'.

Prices in Spain are average, with both housing and labour rather cheaper than elsewhere, and clothing, cars and gasoline rather higher. The weather, however, is better here than anywhere else, and that's the main thing.

Early Pictures from the Mines 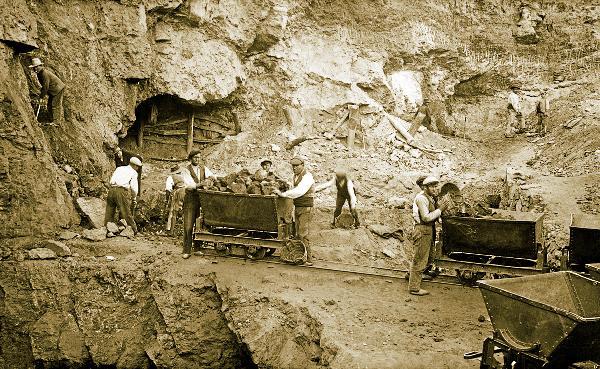 The story of the mines in Serón (northern Almería) has been put into a book called ‘Las Menas de Serón. Fotografías de Ramón de Torres, 1915-1916. Colección fotográfica familia Cervantes-Párraga’ which will be presented in Serón on September 6th together with a photographic exhibition of around 50 pictures titled ‘Las Menas. Patrimonio minero. Las imágenes perdidas (1915-1917)’.
The photographer is interesting, as new details about him surface. According to local historian Juan Grima, the man came from the village of Bayarque, and was called Ramón de Torres Rodríguez. After a few years working locally, recording the miners and other jobs, he moved to New York in 1920, opening a studio in Manhattan and becoming well known there. He died in 1948.
The book will no doubt also be available at the Vera gas station (all useful local historical books, plus the excellent annual El Axarquía magazine are there) or at the Mojácar newspaper shop at the Fuente.
The 'El Almería' newspaper has two more pictures.  The presentation of the book and exhibition is on September 6th, from 8.00pm at the Casa de Cultura de Serón.
Posted by Lenox at 10:44 AM 1 comment: