Mojácar's underground car-park looks rather like the film-set for The Flintstones today. Although - why is nobody working?
Posted by Lenox at 11:21 AM No comments:

Barbara is My Heroine 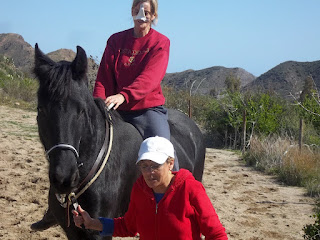 I am very proud of my wife Barbara. She has a terrible disease to deal with called Wegeners' granulomatosis which has weakened her over the past decade, besides obliging her to suffer innumerable operations and hospital stays. She was accused by one spiteful local newspaper article of having a self-induced injury - although they were unable to explain how this could have come about - and, over the years, she has been sorely treated by her own two brothers, who live nearby.
Despite these setbacks, she remains strong and positive, and she has done this to a large degree by taking to horse.
Barbara worked for many years, both in her native USA and here in Spain, with disabled children; introducing riding for the disabled into Spain in 1986 and starting her association Animo around the same time. She now works on a hippotherapy program in a centre in Almería called Animo-Albero.
Barbara has meanwhile developed a program which has helped to keep her strong and has attracted the interest of her doctors - this is to sit bareback on a horse, allowing the animal's own strength to exercise and stimulate her body (it's close to the philosophy behind hippotherapy). This has not only energized Barbara but has slowed down or even reversed some of her symptoms.
She was sent a beautiful therapy horse called Cookie by the therapeutic riding cooperative Cadí Moixeró (an RDI centre in Barcelona) last September and, previous to this, she had been riding in Almería once or twice a week at the Centro Albero, helped by the owner and trainer at the centre Loli Berenguel. Cookie is now in Almería working with the disabled children and Barbara has now acquired a second horse, pictured, thanks to a donation from a local businessman called Diego Mañas Romera, at the Yeguada Valdesol in Sorbas.
Barbara is strong and has all my love and support.
Posted by Lenox at 6:56 AM No comments:

Driving up to Andorra la Vella in my first car, an old Renault van (that went like a cracker, it had an Ondine engine), sometime in the early seventies. For no particular reason. The town didn't have much nightlife beyond a few stainless steel bars. From one of them, some fantastic music was wafting up from the cellar. Down there I met a Frenchman who was playing Malicorne, a Celtic folk band. This one is called L'écolier assassin Enjoy.
Posted by Lenox at 8:04 AM No comments: 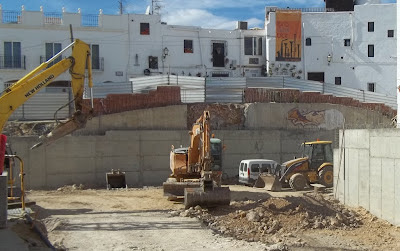 Here is the latest picture of our new car-park. Not long now. Will it be in time for the Moors and Christians in Mid June? We hope so, otherwise Mojácar's internationally famous fiesta may be something of a squib...
Meanwhile, where are the photos and in-depth analysis of this folly in the pages of the Weenie and its imitators?
Posted by Lenox at 8:16 PM No comments: 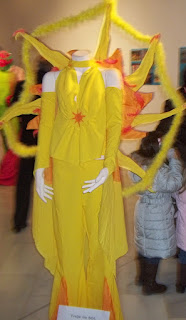 I took quite a few pictures, but my hands must have been shaking... or maybe the camera just flat refused to record what it was seeing. At any rate, here's the best one:

The event was the latest exhibition at the Mojácar Art Gallery (Museum... almost) at the Fuente. Mojácar was arguably discovered, at its weakest moment, when less than 600 people lived here, by a small group of 'intelectuales' who arrived here in the mid-fifties. These included well-known artists like Cantón Checa, Jesús de Perceval and others. They christened both the 'Indalo' (the local hombrecillo mojaquero totem) and themselves as 'Los Indalianos'. Partly through their efforts and influence, together with Mojácar's striking light and appearance, other artists found their way here, and the town became a Bohemian destination during the sixties.
Paul Becket, Fritz Mooney, Matts Hojer, Marisol González, local artist Clemente Flores, Mojácar artist Nicolás Carillo Murcia, Juan Guirado, Manolo Coronado, Luz Marqués, Michael Sucker who painted the church fresco, Francisco Reyes, Win Wells, sculptor Charles Salerno and a hundred others I've missed all contributed to the notoriety of Mojácar.
But politics and art don't mix. You can't make a buck off of culture, it seems. One mayor got a grant to build an art gallery, while another allowed exhibitions to be held there - under the authority of Leslie, the only foreign worker out of the 160 municipal staff (Mojácar these days is about 40% local and 60% out-of-towner - a mixture of Spaniards, Britons and a sprinkling of East Europeans, West Europeans, some South Americans and a few others). The gallery was closed down by the current incumbent, who built a large what-was-going-to-be art museum at the Fuente but is now a mixture of Spanish library and exhibition hall. This ran for a while with art exhibitions, proving to be very popular with the foreign settlers here, but has now changed to something else.
The show tonight, running until February 29th, was well attended by the local people, including the Partido Popular hierarchy, but I was the only forastero there. You see, instead of art, Raquel the young Councillor for Culture had plumped on a show of carnival costumes together with photographs of previous celebrants in all their finery sellotaped to the walls.
Now, Mojácar is not noted for its carnavales. Here, the children dress up in matching outfits and are fêted in the Artisan Centre. That is pretty much all there is. A few local adults giggling and shivering in the cold wander around the fuente area for a day or two. The local celebrants don't seem to know the customs very well - after all, Carnival has only been going since Franco died - and the dates are sometimes a bit off. The costumes are often unmasked and the saturnalia aspect is rather muted. We have Cadiz and Águilas for those who really want to party...
So, a month without art may not be a particular loss - but it is a sign of what Mojácar is becoming.
Cheesy.
Posted by Lenox at 8:23 PM No comments:

We have friends who apparently can't eat without a slice or two from a barra de pan to help them. Fork in the right hand, lump of bread in the left. Wine in front... and fill it up won't you?
And if we are out of bread, would you like to nip down to the gasolinera to pick some up? Why bread, along with pornographic videos, wine, cigarettes again (that didn't last long), cigars, Butano and chocs are all freely available at the gas station is one of those strange things about life here. Anyway, we have a crisp warm barra de pan and we are all set for our meal.
In the morning, half a small panecillo is toasted in the local café and then spread with tomate - crushed or whizzed up - which the customer then covers with olive oil and salt. It's good with a coffee. For the mid-morning merienda, what is better than a bocadillo, an entire barra cut lengthways, and filled with cheese, ham or sausage?
But, with sublimity, comes its cousin crappo. Spain's aptly named pan de molde, bread-in-a-mold or, in American terms wonder-bread, is no Hovis. The best brand (apart from a couple of British-style ones occasionally available where foreigners are likely to shop) is Bimbo. It's not very good. Imitators of this brand are many - Panrico being the best known - and are also not up to much. You can make un sticky sandwich with them or toast them on the plancha with a thick gob of margarine but the taste of a piece of industrially-made pan is poor and dry. Some British restaurants serve a buttered slice if you ask them nicely, but I prefer to munch on real Spanish bread: 'Con pan y vino se anda el camino'.
Better stick to 'Spanish bread'.
Posted by Lenox at 11:32 AM 1 comment: