Some Drawings from Fritz Mooney

These pictures and others come from Fritz' diaries, created in the 1970s. The page size is 13.5 x 21cms. American-born Fritz lived in Bédar and Mojácar until his death in 1987. He's generally considered as the best of Mojácar's foreign artists.

The Almería Museum of Art (opposite the train station) has a small exhibition of artists from the Indaliano Movement (Wiki). These were Almería-based artists roughly spanning a time from the forties until the end of the last century. Several of them were very good - Cantón Checa and Jesús de Perceval are still remembered, as well as Castella, Abad and Visconti.
Their name comes from Saint Indalecio (Wiki), the first bishop of Almería (or 'Urci' as it was called in those times) who died a martyr in the first century.
The Indalianos are known to have baptised the little totem from Mojácar as El Indalo while installed in that village (or maybe they brought him with them?). Certainly, the figure was unknown (despite the collection of neolithic stick-figures in a cave in Vélez Blanco including one, unrevered, that looks a bit like the Mojácar totem).
But here, in an early exhibition in Madrid in 1947, we see the figure (un-named on the poster), but, notice the girl with the cántaro on her head. There's no doubt but that she's a mojaquera. 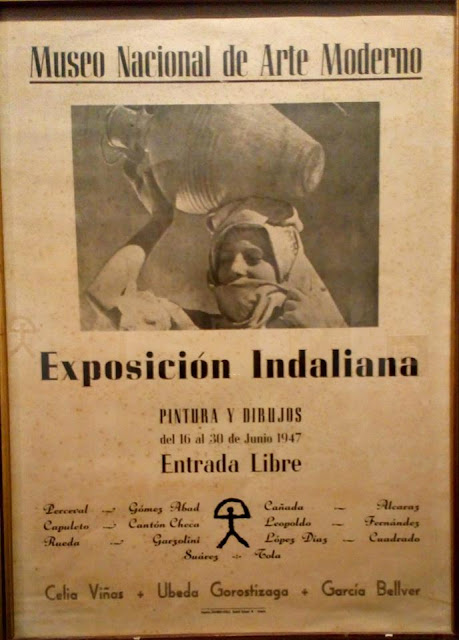 Once the main Spanish parties (less of course Podemos) and media have gotten over their excitement regarding Venezuela (and their criticism of each other for any possible hesitation in declaring Juan Guaidó as being the president of that country, rather than the unlikable but legal Nicolás Maduro), the Spanish focus on foreign issues may turn to the agreeable subject of post-Brexit Gibraltar.
As The Daily Telegraph has it, Spain is in discussion with its European partners that following a ‘no-deal’ Brexit, Gibraltar should be considered as ready for ‘decolonization in all coming EU legislation...’. El Mundo takes up the story: ‘...The United Kingdom, however, recognizes the Rock's right to self-determination and always recalls that 98.9% of Gibraltarians voted against the option of shared sovereignty in the 2002 referendum. The Daily Telegraph quotes the analyst Ignacio Molina from the Elcano Royal Institute, who alleges that Spain is trying to "show its post-Brexit power and influence so that the EU will adopt the language traditionally used by Spanish diplomacy on the Gibraltar question". EU sources have acknowledged that such a text, which refers to the "decolonisation" of Gibraltar, would be "unthinkable" if the UK had of been present. The negotiation of a supposed Hard Brexit (that’s to say: ‘without an agreement’) - is being carried out by the 27, with London away from the table...’.
Reuters is plainer still: ‘Spain will insist on excluding Gibraltar from all agreements between Britain and the European Union once Britain has left the European Union, Spanish diplomatic sources said on Tuesday. Prime Minister Pedro Sanchez has said Spain intends to revive its bid for shared sovereignty over Gibraltar, a British territory since 1713, after Brexit...’. 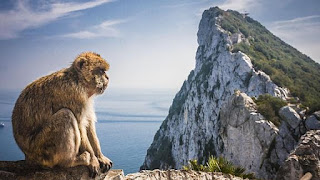 Interesting – if trite – thoughts ensue. Gibraltar, if it were to be returned to Spain, or became part of the EU, would be the only territory whose official language is English (well, ‘Gibraltarian’ anyway) as Ireland claims Gaelic (Wiki) and Malta, Maltese (Wiki) Making the main working language of the EU, Gibraltarian (we did say trite).
Gibraltar has a population of 34,500 souls, who would clearly prefer to be both British and in the European Union. Good luck with that. But, if Gibraltar were to become part of Spain (part of Cádiz probably), with 34,500 rather irate newly-minted Gaditanos making their feeling known, the rest of the world, less the EU-27, would cast aside Spain’s slightly goofy claims regarding Ceuta and Melilla (with a combined population of some 160,000 people) and call for the return of the 31 square kilometres of real estate in question to Africa (and Morocco). The net population and land loss for Spain would then theoretically be in the order of 125,500 people and 24 square kilometres.
As The Olive Press notes ‘...Spain is not giving up without a fight – one that Pedro Sanchez backs up with the fact that 97% of Gibraltarians voted to remain in the EU during the 2016 referendum...’.
*The European Parliament has now ‘recognised’ Juan Guaidó as the legitimate president of Venezuela.