Every time we go to the dustbins these days, we are greeted (most of us) by an array of contenadores to put our waste in – glass, plastic, paper and general garbage. The general one – at least – is then hauled off six nights a week to some vile destination known only to the seagulls. Some people prefer to leave their trash in the fields or in the verges; some throw it off a handy cliff (video here, yes, he’s been identified by the police) while others neatly leave it next to the contenador (for company, maybe?), but most of us know to gamely lever up the heavy and sticky lid and to push our bin-liner of kitchen garbage into the box and out of our lives.
Waste management is, of course, a lot larger problem than Sr López from next door forgetting to divide the glass from the plastic in his trash, and probably reckons it’s a waste of time anyway.
We gamely consider buying an electric car (maybe next year) and console ourselves that the ugly wind-turbines that dot the Spanish countryside are at least clean and save on the diesel-burning power stations – not that we see any difference in our electricity bill.
Yet, our environment is still dirtier than ever. Madrid, Barcelona and Granada have been recently fined by Brussels for unhealthy levels of smog, while our practical solution to destroying plastic and rubber waste (by an accidental fire) and our record for being the second largest polluter of the Mediterranean (after Turkey) is not a happy one.
Worse still, the junk bled into the seas from our cruise ships, and into the skies with our airplanes, means that, unlike Sr López, we are simply fiddling while Rome burns.
Posted by Lenox at 10:28 PM No comments:

As Facebook becomes ever-more concerned with racism, hatred and Boris Johnson, I turn first to something called Amor Vincit Omnis (here) which is a page dedicated to art and poetry. The writer, mvaljean525, works hard at preparing this beautiful site, with several new pictures and text (plus some video) uploaded daily. Each piece of art is accompanied by a poem: sometimes they are from the German or Spanish or Japanese (with their translation).
Where Facebook makes you reach for your keyboard, to post a frowny or send off some irate reply, Amor Vincit Omnis ('To embrace life with the wonderment of a child') is a soothe. 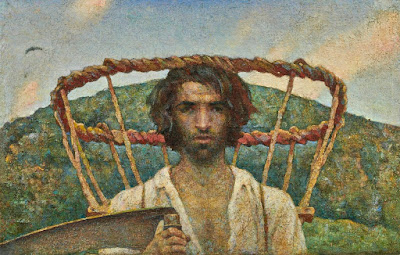 With dirty shoes and baggy pants.
I watched him walking by.
A little boy with curly hair,
and weary lonely eyes.
He came and sat beside me,
he talked of many things.
Poor people, having hearts,
richer than a king’s.
I noticed as he talked,
he was wise beyond his years.
As he told me of his life,
my eyes were filled with tears.
He said, “ I’ve learned that my friends,
are people that I find,
that show me that they care,
by treating me so kind.”
“And the most precious thing,
our heart will ever see,
Is the joy of loving others,
and the joy of love received.”
—-
The Most Precious Thing ………( Based on the Poem “Nature Boy” By Eden Ahbez)
Sharon Rose Mille
Posted by Lenox at 10:09 AM No comments:

How to Rile-up a Brit.

The British embassy in Madrid has a Facebook page - Brits in Spain - where it dispenses wisdom and advice.
On the Pamplona San Fermin fiestas they say. ' For anyone heading to Pamplona to run with the bulls, it´s well worth checking out the official site advice to make sure you´re fully prepped. And it´s not all about the bulls, there´s live music, fireworks. . . basically a week of partying. There´s a reason why San Fermin is on everyone´s list of top fiestas!'.
The annual fiesta in Pamplona includes  (horror alert!) bullfights and the bull-running, where for eight days, around 2,000 young people run daily with the bulls as they are herded by some cows down to the pens behind the bull-ring for that evening entertainment. Six bulls and six mansos thunder through the narrow streets leading to their destination, intermingles with enthusiastic runners - the odd one of which will do himself some injury.
They've done it for years according to Wiki, and fifteen people have managed to kill themselves in the Pamplona bull-run since 1910: thirteen Spaniards, one Mexican and one American.
Most people consider it fun, or high jinks - a bit like driving a motorbike too fast or playing truth or dare (it certainly beats jumping off a hotel balcony, irredeemably popular with British holidaymakers), but it's only the British who, generally speaking, disapprove of Pamplona's attractions.
This is because the British, with their extraordinary exceptionalism, consider themselves better than foreigners (you don't agree? tell me more about Brexit) and to balance this, they offer a kind of cult-like worship towards all animals (perhaps, in part, to teach those same foreigners a lesson). Who but the British would instigate a massive neutering program for feral cats to subsequently return them to the wild - and raise funds for this effort? Our local group of concerned ex-pat Brits are talking about a '100km radius of fixed felines' (the vets must be doing cartwheels for joy).
The Brits like to publish fake news about bullfights (Vaseline in their eyes etc) - and they may even find a Spaniard who doesn't approve (in brutal reality, most people here don't care one way or the other). The fact is that maybe one in ten thousand bovines will be a Toro Bravo rather than a hamburger bull - doomed as it is to a short life in a pen before an abrupt passing in an abattoir at 18 months of age). But their worst criticism is against their own citizens. Our local pet charity has been run by a woman who's American husband has never missed a bullfight in fifty years. He writes about his exploits and publishes his photographs, but nobody says anything. I am invited to a bullfight every couple of years or so with my Spanish wife by our friends and I get into all kinds of trouble. One jack-ass from the same charity even managed to stop me giving a speech (to raise funds for them) on the supposedly bland subject of our local history because of my bloodthirtsy enthusiasm for what is of course a fully-legal protected national fiesta!
Thus, the Brits in Spain Facebook page, which is answered here by 360 people (by Friday afternoon), including Christine 'Its not on my list, it should be banned its cruel for the animals and if people do not realize by now that it is also dangerous I feel sorry for them that they do not have the intelligence to know this, plus fireworks which frighten even more animals both domestic and wild animals, often frightening to death young offspring, with loud bangs that they can either hear or feel the vibration of which distresses them. the entire horror show is a disgrace', and the succinct Priscilla 'Strictly for scumbag heathens'.
Here's Lesley: 'Brits in Spain should not be promoting this' and Tracey: 'Shame on you promoting this barbarity' and here's the lovely Angela: 'Let's hope a good few humans are gored to death in this barbaric display of blood thirsty morons having a fabulous time drinking and having a great time watching animals suffer. Obscene and monstrous !!'.
The normal Brit in Spain post on Facebook from the embassy will attract about five comments (unless its about dogs, where it will rise alarmingly).
As far as Pamplona is concerned, it makes a fortune from its fiestas. A recent article in the Spanish press talked of the amount of beer sold during the San Fermines. In 2017, one and a half million people visited the city over the fiestas. The likelihood of this activity being closed down (or inflatable rubber-bulls supplied in substitution) because the Brit ex-pats in Spain and their free-sheets (check The Olive Press or The Weenie) disapprove seems a little unrealistic.
We Brits like Spain well enough because it's cheap, it's warm and the food is good. We don't seem in general to show much interest in the culture of the country and, beyond our fervour for saving animals - dogs, cats, donkeys and toros - from the Spaniards, we try to involve ourselves with our neighbours as little as possible.

The Mojácar tourist office is excited about the excavation of Old Mojácar. According to La Voz de Almería, our ambitious tourist councillor has asked the provincial representative of the Junta de Andalucía to drop by Mojácar '...saying "We will have that help" that he considers "very necessary" to continue with the evaluation of the historical remains and their consolidation to attract more visitors...'.
Ah yes, visitors.
Indeed, the town hall has spent so far 100,000€ of 'its own funds', as the MemoLab archaeologists from Granada, 'together with eighty volunteers' (from nine countries!) continue to excavate the beautiful and unique mountain in search of historical data.
The group has so far found '...the existence of the remains of numerous towers, a community bread oven, some animal remains, a mosque, houses and some stone balls, as well as geometric drawings...'.
Old Mojácar, with its evidently artificial pyramid shape, has to be a lot more than a small (and improbable) XII century settlement.
It was probably originally shaped and used as a temple by people from a far earlier time. Seven hundred years being but an instant in archaeology.
Mons Sacra (sacred mountain in Latin), gives rise to Muxacra (the Moorish name) and later Mojácar. The Romans were here twice as long ago, indeed a Roman coin found a few years back on the mountain comes from the time of Probus (276 -282AD).
But there's every likelihood that the mount is far older.
Currently, the suggestion is that Old Mojácar was a settlement. Perhaps it was, briefly - perhaps settlers took advantage of what they found there from earlier periods.
It has a few disadvantages though. There's not much space on top, and the sides are steep (annoying for peaceful purposes). While briefly defensible until the food and water runs out, there's no escape route, no spring, no place for the livestock to graze or crops to be planted, no trees for wood or fruit, and not much point either when the Sierra Cabrera with all of those attractions is just a brief kilometre away. 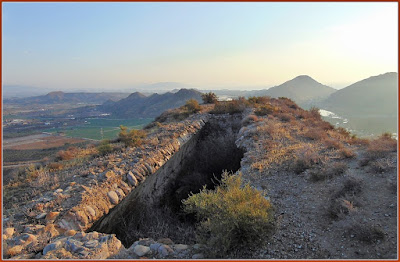 The argument that the aljibe, the water reservoir on the crest of the hill (pictured) was filled with water seems improbable. Either it came from rain water (and don't tell Galasa), or it was somehow transported up the steep hill. The estimated 160,000 litres the reservoir holds would be the equivalent of  twenty thousand Mercadona eight-litre bottles lugged up from elsewhere.
There's almost no reason, besides a spiritual one, why people would populate such a place, especially with the welcoming and safer hills close by.
But tourism is never about reality: its job is to sell fantasy. So, as we eviscerate our Holy Mountain, a few more souvenirs are sold in the shops, and Mojácar (who has never shown the slightest interest in its fascinating
history), presses another button.