Some notes from this week's Business over Tapas*:

No one seems quite sure what the new 'Ley de la Propiedad Intelectual' could mean for the Internet in Spain. Heavy control and censorship? Perhaps. The idea in the proposed rule is to charge 'aggregators' who supply links to news stories, sites like Google News and Menéame, and share part of the spoils with the AEDE, the Spanish Daily Press Association. But how far will this go? To the television guide? To Business over Tapas? Here, we could continue, with a summary but without supplying links (that's to say, to the Spanish media, not the foreign ones). Or perhaps link without quotes. Or plagiarise (by not supplying the link, so easy). Or then again, pack the dog and move next door to Portugal. Either way, we would lose some stories as they passed 'under the radar'. Perhaps some news outlets would indeed prefer to allow linkage while others will want to charge locally-based reportage (although the law, if passed, would be obligatory), but isn't it useful for the media to receive extra readership (and potential new fans) through precisely these introductions? In short, the whole idea sounds ill-thought out and silly, much like this Government. 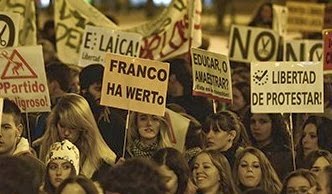 A number of articles on the proposed news 'copy and link' law promoted by the 'Culture Minister' Ignacio Wert: 'Euphoria in the world of culture. Ecstasy in journalism. The crisis of the press – pillar of democracy, the rule of law and good manners at the dinner table – is finally holding a miracle cure. Several newspapers dedicate their front pages to this. We have saved ourselves. Or rather, the Government has saved us from... (music of terror) the piracy!'. From Guerra Eterna. The BBC notes simply that '...Websites can link to freely available content without the permission of the copyright holder, the European Court of Justice says...'. An interview with Internet expert Enrique Dans in La Información includes the gem: 'this Government is completely analfabeto (illiterate) when it comes to the Internet'. Lastly, El Mundo interviews Ricardo Galli, the head of Menéame, a Spanish version of Reddit: 'It will do a lot more damage to the newspapers than it will to us', he says.

Another aspect of the proposed LCI is to charge a canon of 5€ per university student for using technical publications on the Internet (ignoring, once again, the whole point of the Internet, which is that material posted there is freely available). Gizmodo en Español has an interview with Internet lawyer Javier de la Cueva discussing this subject.

'Things have been moving in newspaper circles recently, with the owners expelling their editors (El Mundo, La Vanguardia and now El País), even though these titles are all pro-system, in favour of new apparently more malleable editors. The newspapers themselves are becoming more pro-Government, softening their criticism and reporting Government activities in a more favourable light. The deal seems to be that the newspaper association AEDE can now look forward to becoming protected by the CEDRO (copyright for printed materials) in a way similar to the SGAE, charging and controlling usage under obligation. Will Twitter and Facebook have to pay up?' A Facebook Page here. Of course, many readers come to newspaper articles, directed precisely by aggregators. So, with this rule, readership would fall.

*Goodness, will I be allowed to link to my own websites?
Posted by Lenox at 11:09 AM No comments:

With the first democratically voted mayor for Mojácar, back in 1978, Paco el Marullo as he is called, the town made a convulsive change from a sleepy international artists' retreat (and drinkers' paradise) to an uneasy tripper destination, which eventually turned into the small 'd' disneyland we know today. Odd that Walt Disney is said to have been born here (he wasn't, it was an invention of Old Jacinto when he saw a magazine photo of Disney getting married in Mexico. Coño, he looks just like Diego Carillo's family, he said...). 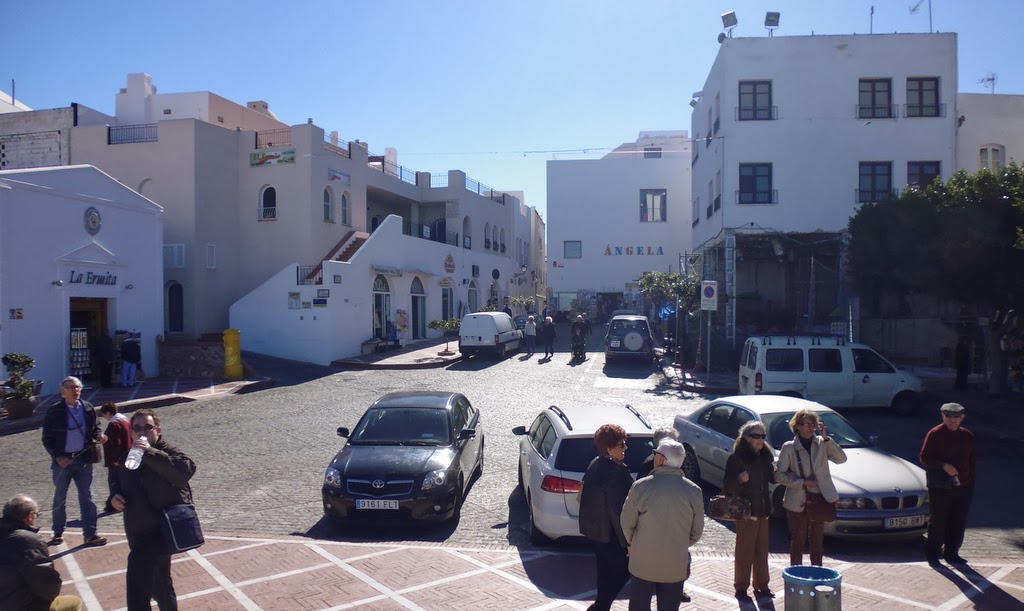 The first building to reflect the new worship of Mammon was the Sondra building, here on the left of the photo. Before, there had been a carpenter's shop with a small arch over the narrow street on the left and a larger one over the road on the right climbing up towards the church. The new shop was the successor to another nick-nack shop in the back of the village (now an Italian restaurant) built and operated by a Corsican called Paccini. The shop windows broke with tradition: they were huge. The stock was exclusively for visitors: Mexican hats, jarapas, tee shirts, post cards, humorous ashtrays, indalos and so on. Business was good - there was a Horizon hotel in the village with a regular turn-over of impoverished but enthusiastic guests. Several other shops soon opened to provide competition with the Corsican.
The old Hotel Indalo, in the larger part of the square (to the right), was bought up and demolished, along with a famous and quite beautiful theatre. Two dozen more nick-nack shops took their place. Mojácar was disneyed. The bars and restaurants in the village returned to their now-monied original owners. They were demolished and re-built, but the rents were too high for the ever-reduced number of patrons. Of over fifty bars thirty years ago in the pueblo, now maybe a dozen remain. Even the old Horizon hotel, El Moresco, is closed and condemned.
Sadly, the town is now empty eight or nine months of the year, as - apart from the view - there is now little reason to stay. Tourists are bussed up to the back of the town and must puff their way uneasily up the rest, to be told a bowdlerised version of the town's history. A massive proportion of the town is now foreign residents, who cluster below on the low hills and approaches to the beach, where they are tolerated for most of the year and ignored during the summer months. Despite their massive and regular injection of capital into the municipality, the recent Town Halls have preferred hotel tourism, which they see as a panacea to the area, where in reality it is merely of some moderate use to those who own shops, bars or restaurants.
Posted by Lenox at 1:43 PM No comments: