If you were wondering why the Mojácar authorities behave the way they do, then maybe La Voz de Almería has the answer here:
'The Spanish Federation of Large Families today presents the Municipal Council of Mojácar with the Seal of Family Tourism for "the excellence of its equipment and services, which meet the expectations derived from the family trip" which makes it the first Andalusian municipality to have the certificate.
Mojácar is a municipality that has already defined a tourism strategy for development and specialization in family tourism through programs and activities focused on tourism with children highlighting the wide variety of cultural activities and nature oriented family leisure activities promoted by the Municipality of Mojácar...'.
Mojácar's business model is about filling the hotels (including those wonderful all-inclusive ones) and sending customers hotfoot to the souvenir shops.
You see, residents don't stay in hotels, or of course buy souvenirs...
Posted by Lenox at 9:49 AM No comments: 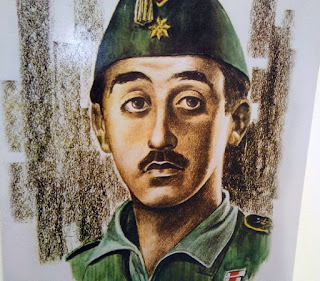 A group called the Hermandad Provincial de Caballeros Legionarios, the provincial brotherhood of the Gentlemen of the Legión Española - the crack Spanish force with their barracks in Viator outside Almería - has an exhibition going on at the Patio de Luces in the Diputación de Almería building in the provincial capital.
Not many people will be queuing up to see it perhaps, although it is said to be a pretty good exhibition of photographs and pictures of the Spanish Legion.
Turns out though, there's a problem. the revisionist parties in the City Hall don't like the people who founded the Legion in 1920, some 16 years before the Civil War. One of the two involved in creating the legion was General José Millán-Astray, who was as mad as a hatter. Millán-Astrey once lost his arm in a battle in the Rif. It was blown clean off his elbow. He is said to have picked it up and hurled it at the enemy. No doubt impressed, they gave up. What a guy, eh? The socialists and those further to the left are trying to have the truculent general erased from the history books (without, we hope, offending the Legion). They are removing his street signs and the odd statue glaring at the passers by under the customary load of pigeon-shit.
The man in the photo isn't Millan-Astray though -  it's a man the lefties hate even more even though the picture comes from long before he left his mark. This is a young General Franco.
As the empty rhetoric continues, here's the Brotherhood's take: 'The exhibition at the Patio de Luces attempts to show some brushstrokes on the history of the Legión and the photo to which the PSOE alludes does not include the figure of Francisco Franco in his years as the Caudillo, but as one of the figures of the founders of this glorious body, many years before'. Izquierda Unida meanwhile says 'We want to formally complain regarding the presence of well-known fascists presiding over an exhibition dedicated to the Legión and installed in the Diputación de Almería'. So silly.

While British ambassador Simon Manley has been trying to put out the fires of health insurance, pensions and the falling pound (see his latest address to the Britons in Spain here), no one wants to talk about the British residents in Spain and their voting rights in the Spanish local elections of May 2019. Will they be able to vote then? Will they be able to put forward candidates? Without the British, will the Town Halls concern themselves over the remaining foreign residents? Will Spain and the UK make a special bilateral agreement on local elections (allowing Spaniards to vote in the UK and Brits to vote here)? Is anybody talking about this? Is anybody listening?
I was approached today by someone who wants to look forward to the next local elections. What could I tell him? We may have the vote, or maybe not. For our town, where the population is roughly split between the local Spaniards and the foreigners, these concerns are huge. Our mayoress would likely win the next elections anyway - she has formidable advantages -  but would she have a token foreigner on her voting list? Would she spend energy on those concerns that the foreigners might have? Would our British opposition leader (born in the UK, been in Spain since she was three) be able to run her party? Yes, she could take Spanish nationality, but what about her voters?
Spain has an agreement with EU countries that expatriate EU citizens can vote and be voted for in local (and presumably European) elections. The European elections, by the way, couldn't be more useless here as candidates, operating on the same list system, represent their country filtered through their party. You either vote for a conservative Spanish nationalist or a socialist one. Neither of them could care less about foreign residents' rights.
Spain also has bilateral agreements with a number of other nations. These include, I think, New Zealand and the Turks and Caicos Islands. In these cases, the suffrage is merely active. You can vote (yes, both of those Kiwis, I mean you!), but, you can't run for office. Can we expect to be given a sop along those lines?
I can't see the British allowing the Spanish residents over there the right to stand in any elections if the Brexit gave them an opt-out, so would doubt that we would retain those rights here.
Either way, it is beginning to get close to the time when new parties are formed, new alliances, new candidates and new proposals. With Brexit, we may be facing the loss of even more of our rights as foreigners in Spain.
Simon Manley touched on this concern in a note issued on Tuesday September 12th: '...On the right to stand and vote in local elections, the UK wants to protect existing rights of UK/EU citizens to vote and/or stand in local elections in their host state. However agreement has not been reached on this point...'.
Well, when are the next local elections in the various EU states and what would happen to existing foreign councillors when the Brexit finally bites? We need some information and, of course, some proper representation.