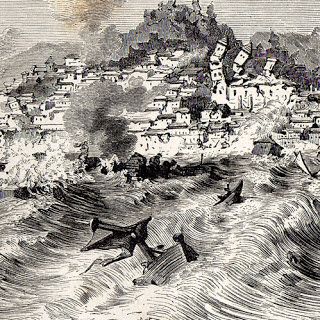 Mojácar and Vera were largely destroyed in an earthquake which occurred on the night of November 9th 1518. Articles in Spanish here and here tell the story.
There had been a series of worrisome trembles that year ever since mid-June, but nothing to match the final convulsion.
Briefly, with the eternal threat of the Barbary Pirates (I wrote about them here), and all the local defenses demolished by the ferocity of the earthquake - we are on a major fault line, the same one that finished off the Minoan Civilization in Crete in 1450BC - the area was suddenly and abruptly in a bad way. It was, after all, just thirty years after the towns had been liberated by the Reyes Católicos.
It was a Tuesday, and the earthquake arrived around about midnight. Vera was totally destroyed (the hill behind the current location of the city 'Cerro del Espíritu Santo' was the old town) and Mojácar was badly hit. There's an eye-witness account from the then mayor of Mojácar - Iñigo Guevara - who described the collapsed castle in these terms: 'I saw it all fallen in, until the very foundations were visible. There is almost nothing left of the fortress which is so flattened that it appears to have been destroyed by all the artillery of the world'. A report from the time says that almost a third of the eighty homes which made up Mojácar had collapsed. Another report says that the clergy were frightened to give Mass in the church due to its state. It says in the original:  "En la dicha villa de Moxacar no se dize misa a causa que los clerigos no osan entrar a dezir misa a la yglesia porque esta para caerse a causa del terremoto que agora hizo”. A little over a dozen people died in Mojácar as a result of the earthquake. In Vera, the death-toll reached 150. The survivors of the catastrophe  fired an arrow into the sky to chose the site of the new town (Wiki).
The Pirates? 1,500 Moors showed up outside the defenceless village of Mojácar on October 7th 1522. Some of them might even have been born there. No doubt it was time to head for the hills...

Trawling back to last September here on Spanish Shilling, I wrote about the Parque El Boticario outside Almería City in the Los Llanos de La Cañada (near the Riding Club). This is a 14Ha park designed by the Conserjería del Medio Ambiente, stocked with all the different flora of the province ('1.300 árboles, 2.000 arbustos y 75.000 plantas'), with a duck-pond, 'Moorish gardens', children's park and other wonders. The whole thing, built with European funds, was hastily offered on completion to either the Diputación or the City of Almería. Both declined the kind offer.
So Medio Ambiente (a bloated and largely useless organisation - how could it be otherwise?) was left with the job of maintenance, gardening and watering. They naturally dropped the ball. The park last September was dry and in a sorry state - some of those senior's exercise machines which every village and town feels obliged to buy and leave dotted around, were rusted out. Some overflowing dustbins from a Sunday party. Some dead trees and bushes, some infected plants (chumbo, palm trees and olive, indifferently attended.
A second visit a couple of weeks ago, after a few spring rains (a few), and the Boticario looked a little better. There's a large bar/restaurant, evidently rented out privately, on the edge of the park. Perhaps it pays for a gardener or two.
The park is open - except on Mondays - and it's a nice and of course quiet place to visit, but don't expect to see the maintenance and respect it deserves...
Later:  I returned a third time later in June, and walked around the higher part of the park, where the shrubs are ever drier. Then, on leaving the park out of the gate - just in front I found the Bar Álamo (it means a poplar tree). Great air-conditioning, and the owner is an accomplished artist with some of her pictures up on the walls. 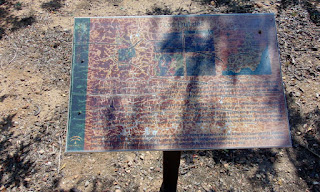 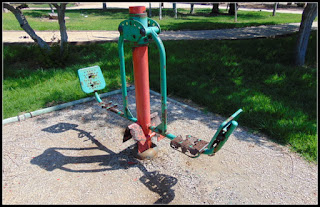 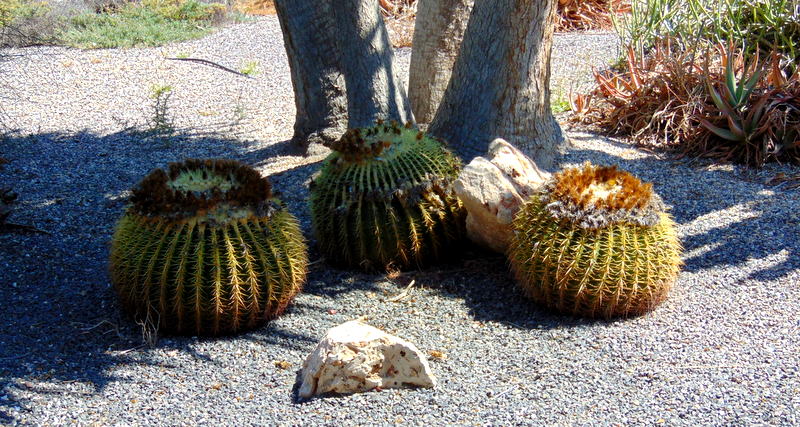 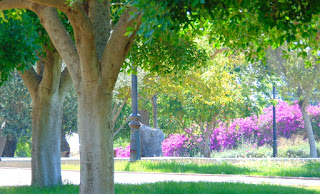 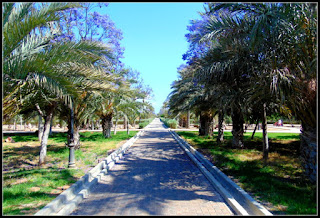 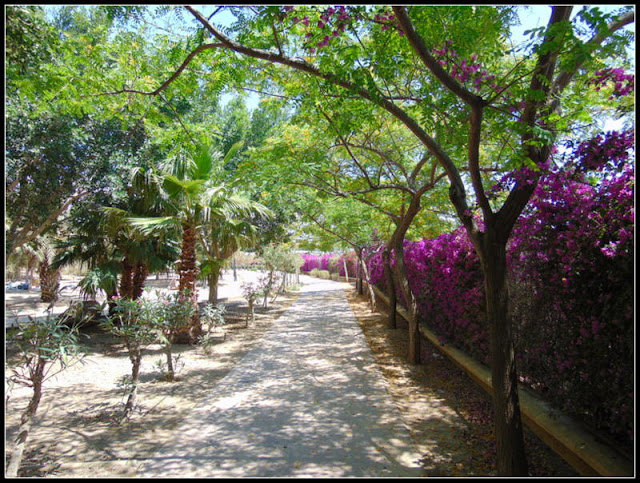 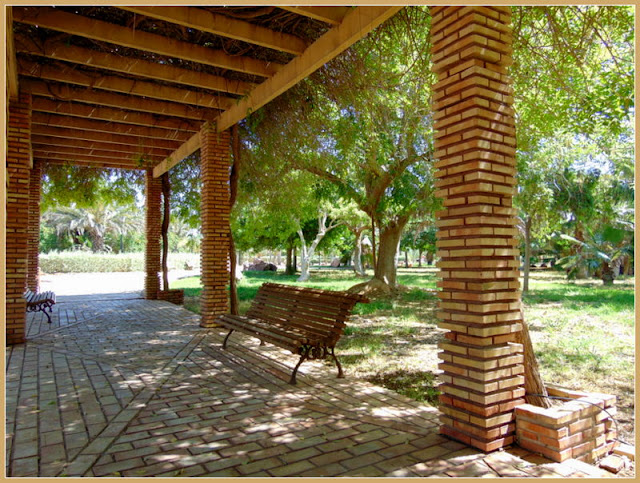 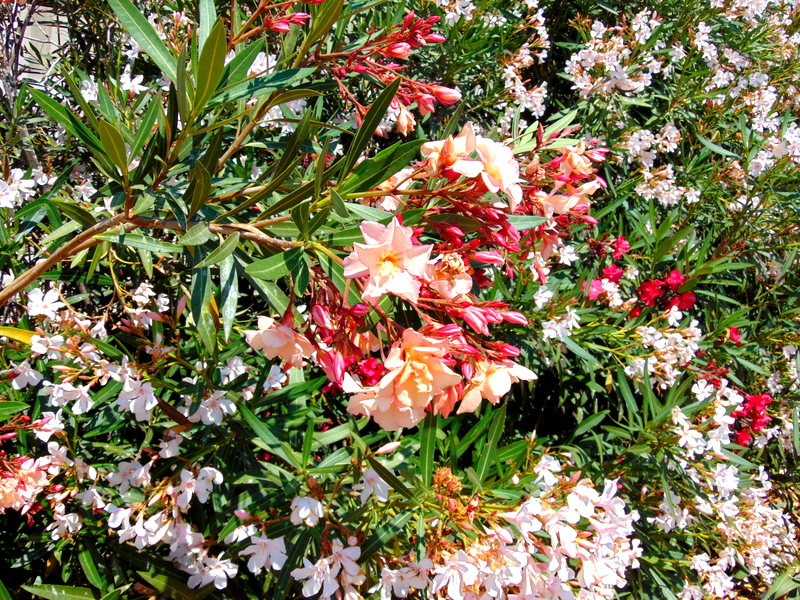 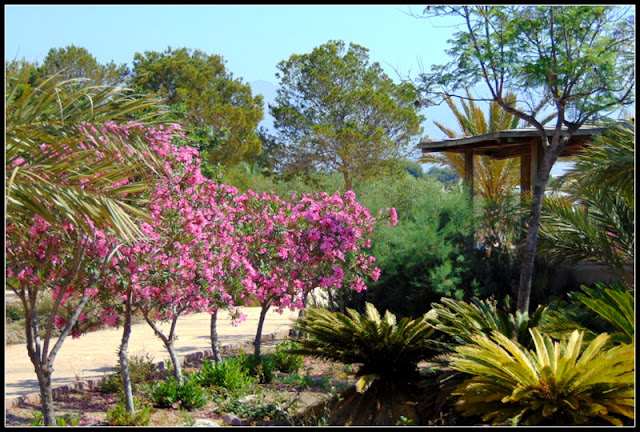 The Bug in the Computer 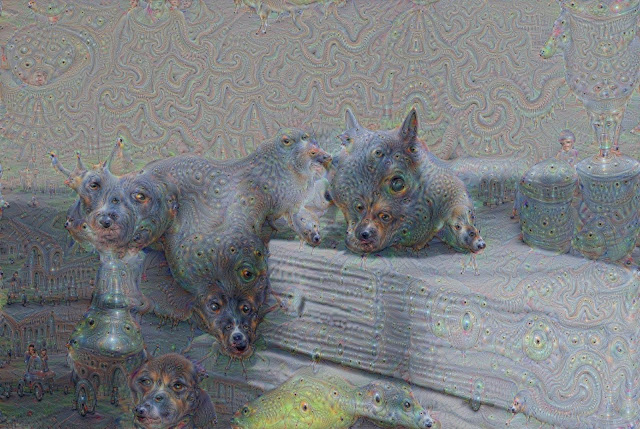 This fine looking but rather creepy picture was made by an AI, an Artificial Intelligence. A computer. I understand that it was told to go and make something artsy and this is what it came up with. The story is here.
We have been warned about these things - computers which are so clever that they can upgrade themselves without our interference, making them cleverer still. Those who enjoy Terminator will be familiar with these things, and the premise - or perhaps promise - that they will one day decide that the World doesn't need Humans any longer.
Cue the sinister music.
While I am not the one to write the story, in my version there would be a saviour. Small and fairy-like, in their tens of billions, those minuscule flies from the chumbo, the prickly pear, that have assailed Almería this year. They swarm and fill our eyes, noses and mouths. They go straight through the mosquito netting. They swat into a tiny red blob of cochineal. They are in our drinks, our food,they are clouding milk-white around the lights and, most destructively of all, they fly into the fans and the insides of our computers.
Short-circuiting them.
Would the AI stand a chance against the tiny creatures that have defeated our scurvy ecologistas? Not likely!
Posted by Lenox at 7:44 PM No comments:

Barbara Napier. It's Been a Year. 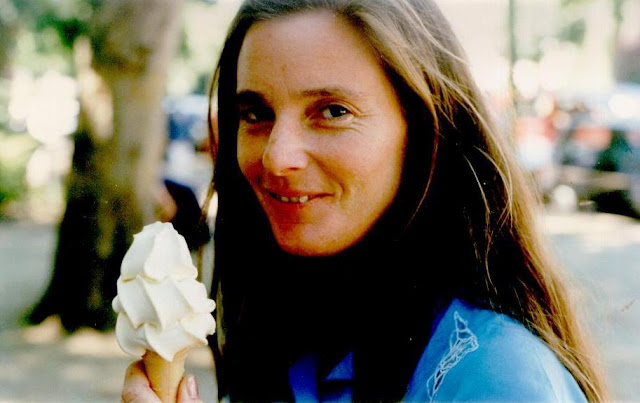 Barbara died a year ago, and I miss her.
She was a brave woman and a kind one. She suffered from a disfiguring disease called Wegener's Granulomatosis, and from 2002 until her death on June 4th 2014, she was not only in terrible pain, but was forced to undergo the most humiliating and terrible punishment, together with at least thirty major operations. These were either paid by the insurance we had, or later, when money was tight, by the Spanish National Health (which is very good, and our thanks to them).
Barbara was born in San José, California on July 7 1953 (she wrote about her early life - and her poisonous siblings - on her blog here) and she arrived in Spain in around 1980, staying originally with her parents who were living in Mojácar, but soon, in her own house on land next to the family estate.
She must have been amazing when she was young. Here's what a friend of Barbara called Sharon wrote:
'I just wanted to share a special memory I have of Barbara with you. My parents lived on Trinity Ct. near Foothill Elementary School and Barbara lived miles away from me in another part of Saratoga. One Saturday she called and said she was going to come see me. About an hour later the doorbell rings and Barbara is at the front door and her horse was out on the street. It must have been Jiggs. She got back on him and we stood out there and chit-chatted for a while until she decided it was time to ride him home. Of course for her to ride to my house and back home she had to ride on Highway 9 for several miles. I always wished I could have seen the expressions on the faces of drivers as she rode her horse home on a major highway. She was one of a kind and fearless. I feel honored to have known her'.
Barbara soon learned Spanish, by mixing with the local farmers and showing her interest in animals. She would go out riding with Don Diego, the doctor, as he did his 'rounds' of the far-off isolated cortijos up in the hills. One old lady complemented her on her idioma - 'you ain't from around here', she said, 'not sounding like that... you're probably from Los Gallardos!'. Barbara was immensely pleased.
Barbara ran a donkey-taxi on Mojácar beach her first year here to make ends meet (it was really a mule) and had a job working as secretary for the mayor - Paco Marullo. Later, after we met and married, she started a charity here called 'Animo' to help disabled kids using equine assisted therapy. Put 'em on a horse and let 'em go, in my (very ignorant) words. Many children came through our stables, and many more volunteers helped, until the money ran dry thanks to a newspaper I ran (rather badly). Barbara traveled to various meetings, in Germany, Austria, France and England, and held a congress here with guest-speakers from the various world bodies, including the FRDA and other major players in the field. The head of the ONCE told us once that he heard about Barbara's work while in Australia. Spain being Spain, Barbara's efforts were totally ignored in this country, but 'hey'.
You can read about her charity and her love of animals on her blog Animo.
Later, she tried to set this dream up a second time, if on a smaller scale, but with not much enthusiasm from the Spanish once again, apart from the brilliant support of Loli Berenguer from the Centro Ecuestre Albero in Almería, and a luke-warm support from the University. The Mojácar Town Hall, of course, never took the slightest interest in any of this, not even when Barbara organised competitions of donkey baseball during several years.


Barbara loved kids, and the house was always full of them. Many - and I exaggerate only slightly - stayed for several years. A hard day at the newspaper and a warm welcome from the children, or an important lesson of relativity from the disabled kids over at the stables.
We have three children of our own, Jessica, Amber and Daniel and four grand-children. They all live in the USA (jobs for foreigners - even bilingual ones -  are scarce in Spain).
Barbara was my soul mate, and now she's gone.
Posted by Lenox at 12:07 PM 4 comments: