It's all a Blur

A Short Walk through Town

I was walking down the street of our local market town the other day, day-dreaming of the light chores that faced me as I fiddled absently with a shopping list in my jacket pocket, when a car suddenly hooted its horn behind me and practically gave me a heart attack. ‘¡Ehh Tío! What's the hurry?’ I shouted, annoyed.
It's not like there's any room on the pavement for me to walk which is why I understandably choose the street. The pavement is full of trees, cracks, holes, dust-bins, ONCE stands, chairs and tables, parked motorcycles, telegraph poles, partly dismantled telephone booths, low flying shop awnings (duck, or lose an eye), an old iron bench, a half-filled skip, prams and trolleys, visitors from the north (who evidently don't know the rules), shop signs, accordion players, traffic directions and postcard stands. Little old people will have taken a wooden chair out of their gloomy ground-floor home to turn it to face their front door, and will be sitting on it grimly ignoring the passers by. Many motorists have parked at least two wheels on the pavement, which can vary arbitrarily in width from several metres wide to the span of a hand. Some flagstones and cornerstones are missing. A dusty square hole suggests a departed tree.
A pavement in Andalucía is rather like the tile skirting in a room: it's there strictly for show.
So there I was, walking down the street, dodging the pedestrians, cars, motorbikes and ice-cream carts when this car honked behind me!
Not that I took any notice.
The cars are double-parked down the High Street, the Calle Mayor, some with their emergency lights on giving the impression that the drivers will soon return. A bus disgorges passengers from the middle of the street while the traffic waits with more or less patience behind. A motorbike evidently laden with the entire family takes to the pavement. Its exhaust pipe appears to be missing.
In front of the bank, work-men are inexplicably painting a new zebra crossing. They will just do half the street (protected by red cones) this morning and perhaps they will return tomorrow to do the rest. Perhaps not. There's a zebra crossing on the other street which was never finished, as if the diligent street-crossing pedestrian will be obliged to give up his object in mid-flow, or perhaps he'll pass obligingly across into another dimension. Like most of the people in the scene, I am only faintly interested in what the painted white stripes are for: a decoration...? a service...? Do children try just to walk on the stripes for good luck?
In Almería city, the town hall has painted them in attractive red and white bands. The opposition councillors are complaining: they should just be in white. Preferably a white that fades after a few weeks...
A family of gypsies is standing on the pavement now, just opposite a zebra crossing. Are they thinking of using it, or is it just a comfortable place to congregate? The traffic hesitates slightly in doubt. But no, it's just a variation of the companionable group standing on a street corner, chatting away agreeably while, inadvertently, breaking the flow. Who's in a hurry anyway?
Seduced by the white lines, a visitor lurches into the street. Streets are indeed for crossing, nobody disputes this, but the white lines are not there to make you forget to look at the oncoming traffic, or to forgo waving a rolled up newspaper at it. A car pulls to a halt as the visitor heads blindly across the street towards the souvenir shop: the car behind swerves and accelerates past the first one, narrowly missing the opportunity to make the ‘it happened here’ news-page of the provincial daily. The nearby municipal policeman, shocked into inaction, decides it is time to go and have a quiet nip in the English bar. Perhaps he won't have to pay.
I am sat by now at a nearby table under a spreading tree, trying to ignore a panhandling dog who somehow thinks I might share my tapa with him. ‘Bugger off’ I tell him, flapping my paper in his direction. ‘Shame’, tuts an oily Englishwoman sat at a sunny table nearby. The dog edges hopefully towards her. It growls at an approaching street vendor clutching several miracle spanner kits and a fishing rod. ‘Looky looky’, mumbles the itinerant merchant disconsolately at the Englishwoman as the dog edges him off. I leave a couple of euros next to my empty beer glass since I don’t want to go inside again. The owner won’t mind. He's a tiresome Atletí supporter who always has the sports TV on at full blast inside and knows that I don’t like football. Anyway, the Russian girl does the tables.
A wave of horns echoes down the street as the double-parked cars take their inevitable and regular toll. It’s strange how emergency lights are considered as a polite and respectful signal to stop the traffic-flow for a shorter or perhaps longer period. Sometimes, if the horns are insistent enough, the absent driver will erupt out of a shop at a sort of half-waddle-run, apologetic and shrugging helplessly. ‘I wouldn’t have stopped the entire street, you know’, his gesture indicates, ‘but I had to carry out this rather important little negotiation’. As the traffic lets out its collective clutch, it occurs to me that it's a perfect moment to amble across the plaza to the shady side and check out the blind man's lottery results. Money back or try again! A bicycle has been chained to the bench in front of the shoe-shop, slowing the pedestrian traffic down still further. I'm not too judgmental about this, seeing as the bike is mine. I release it from the bench and we slowly walk along the street together towards the port and the prospect of a fish lunch. I’ll do the shopping later. I'm not in any hurry.
Posted by Lenox at 8:20 AM 1 comment:

Removed by order of the court!
Posted by Lenox at 8:13 PM No comments:

On Water and its Many Uses 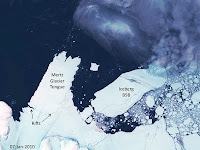 A new piece of ice has detached itself from Antarctica - not the one on the right, but the one on the left. They are both a decent size, around the same as, apparently, Luxembourg - for those of you who can instantly picture such an expanse. Big, anyway. One should also remember, while contemplating a gin and tonic, that ice mostly floats below the surface, so there is a lot more under the water than above.
The other point to make is that they are both floating gamely north and, while they probably won't get through the Straits of Gibraltar, whether from size, inclination or melted remains, they will certainly help to raise the sea level by a bit.
Perhaps not enough to bring my property onto the 'front-line', but, together with the wettest winter on record, well - since I've been here at least - our small 'Corner of Enchantment' is getting decidedly soggy.
Mojácar is a beautiful and dramatic looking town, mostly built on hilltops and cliff-edges. The houses must have flat roofs for some obscure reason. This all means that they leak and, in many cases, will take off majestically down the hill when the earth or rock gives way after a good rainstorm.
We are now all currently clustering around the foot of the sierras, within spitting distance of the sea and waiting for a surprisingly belated power-cut, so a rise in the sea level could start to become a problem.
Forecast tomorrow: More rain.
Posted by Lenox at 6:10 PM 2 comments: