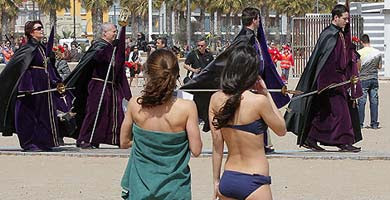 As we know, Semana Santa, Holy Week, is a long and agreeable holiday. We spend it on the beach or in the bars. A few of us might dress up in purple and perhaps even go to mass. But for most of us, it's a welcome week off work and a chance to relax.
Might even meet someone.
Posted by Lenox at 10:52 AM No comments:

The Opportunity for Change

We are in the days of the 'pre-campaign', as defined by the rules which were quietly changed this past January. You can't put up your posters yet - although there are several in Mojácar for the delightfully named UM party, covered by tarpaulins to uphold the law, but just as effective for anyone who lives here and saw them in their glory for a month or two. 'Capacity', they say. 'Oh yes we can'...
Meanwhile, the main parties in the country, the national ones, have their opportunity. They will be on the television with their business as usual, their scandals and mutual accusations (carefully not mentioning anyone else, since, like most countries, we have the politics sewn up in a two-party system). Then, there are the 'routine' meetings when the party leader or a minister (or equivalent) is chewing a microphone in public, talking, naturally, about state affairs... not the upcoming local elections - that wouldn't be right. There are autonomous elections in many parts of Spain as well, where the non-Spanish Europeans are not invited to vote, but thankfully, Andalucía is spared that. Here, our autonomous elections are held with the national ones, in the hope that the eternally ruling PSOE-A gets in again. Since the autonomy is ruled and run from far-off Seville, it won't make much difference here anyway.
In the towns, the smaller parties must wait. We gossip and plot our modest campaigns as the larger parties look over their war-chests and order their billboards and teeshirts from Madrid. It's the calm before the storm. The mayors may have handled the voting list, but we shall get copies of them next week. 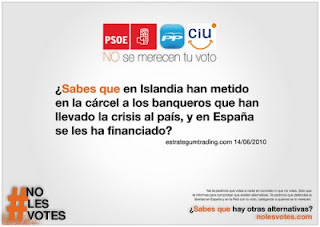 But what does this advert from nolesvotes mean? Don't vote for the establishment. It's about the institutionalised corruption in Spain, the sell-out to Hollywood ('Ley Sinde'), the 'war' on Libya (with Spanish munitions flying on both sides), the five million unemployed, the protection of the bankers, the alternation (and mutual protection) of the two parties, plus the CiU in Catalonia. 'Without your support', says the association, 'the big parties have nothing'.
Here in Mojácar, with the PSOE in collapse, the peril for our town comes from the local PP, who have not only mismanaged and affronted our citizens for the past four years, on their return to power, they are planning to eviscerate the square beside the church, making a pointless underground car-park for residents: a park for 37 cars. Will the workmen stop as they dig through 4,000 years of history as treasures from the past are unearthed? They didn't the last time with Gabriel, when ruins and graves were found in the Plaza Parterre, neither the time before with Bartolo while chewing up the surrounds by the Castillo. And all for what? Several million euros of scarce Town Hall money misspent. This party builds 'Padel Tennis' courts on the beach at a premium, without there being any demand or interest. The football stadium wasn't cheap either, even though we don't have a team yet. The Art Museum, switched expediently to a gallery earlier this month, has now been closed.
It's time for a change. Choose a party that reflects the make-up of your community, a party with a proper mixture of Spanish and 'European' residents. A Town Hall should at least reflect the make-up of its citizens and should, like the nation above it, be responsible to them - not to self perpetuation and outside interests.
Posted by Lenox at 8:58 AM No comments: 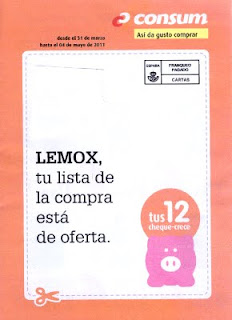 If I am faced with a word or name I'm not familiar with, I copy it out carefully. I expect most of us do. However, foreign names are considered slightly frightening by many Spaniards. Too many letters or not enough. In today's newspaper, Helen Prior becomes Hellen. Even a simple John becomes Jhon or even Jhonathan. There was once a brand of Spanish denims called Jhon Jeans. I may have an old pair somewhere. My dad was called William, or rather more often, at least in print, Willian. My own name is pretty simple, but even after being here for 45 years, people can get it wrong. There's a mention of me in a book published by the diputación de Almería, about how I ran a newspaper in this province during fifteen years. So much for posterity, they've spelled my name wrong.
Perhaps this explains why everyone is called Pepe or Paco. In fact, when I was a kid, the local people used to call me Pipo.
I guess it's all to do with concern over the spelling.
Posted by Lenox at 12:55 PM No comments: 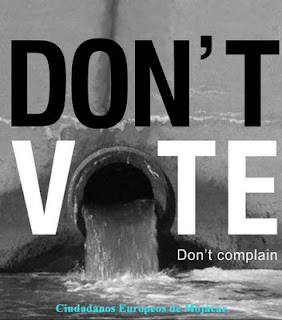 I suppose there is a natural reticence in getting involved in local politics – or even going as far as voting. We’ve all either heard, or indeed volunteered, the various excuses of ‘it not being our place’ or ‘we don’t know the candidates’, either of which are really rather an admission of ignorance and a lack of enthusiasm for one’s community. Go and meet your neighbours! Find what you like and identify what you don’t. It’s now your community and it’s worth making the best of it.
To the comical line about how the natives are restless, as the fireworks are exploding, the megaphones are honking and the crowds are cheering, I would answer that we are not in some South Sea island uneasily wearing grass skirts. We are not colonials – this is our town: our future.
There are different issues that incite different people. Those unfortunate enough to live in an ‘illegal house’ (there are literally thousands of families in this position in the Almanzora Valley) would be wise, if they could, to vote for a party which offers solutions, rather than creates and exacerbates the problem. Other people want more sports facilities or perhaps residences for the elderly; they might want more discothèques and less police presence, or maybe the very opposite. It’s all about politics (and in my examples here, age and inclination).
There are the two main parties in Spanish politics, the PSOE – mostly responsible for the ‘illegal houses’ problem; and the PP, which favours and champions ‘land grab’. One is nominally socialist, the other, in theory, conservative. However, in local politics, it’s all about local personalities and local issues. Our mainstream party candidate for example is aware of the local issues and, despite pressure from ‘head office’ in far-off Seville or even farther-off Madrid, will seek to provide local solutions. At least, so one might hope. In reality, small town politics is often about local personalities, families and opportunity. We call it ‘clan politics’. We can ignore all of this and we will in turn be ignored.
Otherwise, it is better to participate, join in and integrate. Sooner or later the parties must open their gates to fresh ideas and finally face the loss of their baleful family influence. The community becomes the stronger and this in turn creates wealth and jobs. Property prices would even rise with the demand from buyers and potential settlers – because who wouldn’t want to live in a harmonious and well-treated town?
Posted by Lenox at 9:39 PM No comments:

We used to have a number of pine trees in the fields around the house. They were planted originally by my father about forty years ago. He was a keen tree-planter, he said, because there weren’t any in this part of Spain. Trees, that is. Or planters, come to think of it.
He would drive up to the village fountain with several large plastic bottles that started out life holding industrial chemicals (for the swimming pool – the water came by truck). Fill them up then lug them out of the old Renault and over to the seedlings. In the end, there were about 500 trees, almost all pine, and quite a few of them festooned with a type of disagreeable caterpillar which regularly makes its presence in the pages of the ex-pat press. More because of its rash-inducing hairs and its processionary characteristics that anything it might do to the unfortunate pine tree.
A brush fire in the high hills of next-door Turre a couple of summers ago was improperly put out and a second fire duly caught a week later and rushed down the hill, across the valley and into our municipality, burning, among other far more important things, our five hundred pine trees, along with their resident caterpillars as well.
So, two winters on, the trees are dead and dried up, ready for some attention. They fall like skittles in the wind, their roots rotted away. I have a hand saw and have been pruning away at the smaller trees as and when the house needed firewood, but now, with the trees falling in any direction, crushing whatever is underneath, some friends have come by with chainsaws: some wood for them, some for us.
For the past three days, I’ve been burning the remains of the forest – the small branches, fir cones and other detritus – in some large bonfires. Here, you should get your burning permission first, unless you intend to have a good brush-fire and burn down the neighbourhood (don’t get caught – an Englishman in Granada recently cooked half the province and got fined ten million euros).
In the old days, you went to get a licence from the local police, but now, a special fellow from the department of the environment shows up twice a week (although not on any set days, unfortunately) to give out exactly the same permit. Several of us were waiting for him last Monday. Our policeman phoned to ask where he was. He said he couldn’t get a car to come in that day.
So, I’m using an old permit. It’s not as if anyone is going to check.
Posted by Lenox at 8:06 AM No comments: