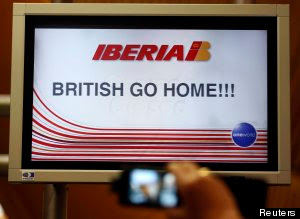 You see, they can spell it right when they want to...

Where Else is Safe

Helen and Len Prior have just received (or rather, will one day receive) a small payout from the Government as an apology for bulldozing down their home in January 2008. Half of the settlement, naturally, to go to their lawyers and procurators. As is only fair. The balance, 15,000€, not much in the great scheme of things. No doubt, the public boycott of Spain as a retirement destination will continue with the same enthusiasm as before. (Note to Self: I'll have to check with the Daily Mail about this).
Has Spain lost a staggering amount of foreign divisas, billions in lost sales to Northern Europeans, losses too from the regular transfers of pensions that the retirees bring to their moribund pueblos in the sticks? Has one small demolition in Vera, crassly mishandled yet largely unknown to the greater Spanish public, managed to divert the Brits, Norwegians, Germans, Swedes and Irish from buying a home in Spain? In short: is Spain's loss  France, Cyprus or Portugal's gain?
Certainly, the statistic of 300,000 homes, declared a posteriori as 'ilegal' (once the cheques had cleared) by the Junta de Andalucía (who, we are asked to believe, didn't notice them during the process of being built), has helped make Spain a pariah in the buying-a-home-abroad stakes.
So - sick of the cold, the prices, their family, the price of gin and the underlying threat of violence - where do the retired go to live, to enjoy a glass of wine from their terrace as the sun quietly sinks behind the dusty hills? I thought to check up on numbers of Britons (as a start) living in Cyprus, France, Portugal and Italy. So far, it appears that there are 60,000 in Cyprus (which sounds, from my brief research, ghastly) and another 200,000 in France (the British in France don't live in compounds or single-nationality  urbanisations as many of us do and, as I remember, they don't mingle or speak to each other at all if they can help it - even in their fractured French). I'm still working on the other shangri-las since a 'moderator' put the kibosh on my question on an ex-pat forum 'How Many Brits live in Your Country?' for some reason. Probably works for the Spanish tourist board...
The Guardian has been working on a similar idea, I discover. 'Where Do People Live?' it asked recently.  The survey included Poland and dropped Portugal and Cyprus. It gives the current official number of Britons living in Spain: 390,000 - a calculation made from the number of Brits who have inscribed themselves on the town hall registries (el padrón), which, as we all know, is pretty incomplete. No doubt Brits in other countries are more responsible... the Guardian puts the numbers in France at 150,000 and 29,000 in Italy. Germany enjoys the company of 104,000 Britons apparently. I'm sorry, Poland? 764 persons.
My research into France has so far thrown up a web-site called 'Don't Move to France' which is self-explanatory, if a little surprising, and there are several sites about Cyprus that are worth reading. So, as I wait for more information, I reflect that perhaps Spain isn't so bad a place to buy a home after all, as long as potential buyers do their homework.
Posted by Lenox at 10:43 AM No comments: