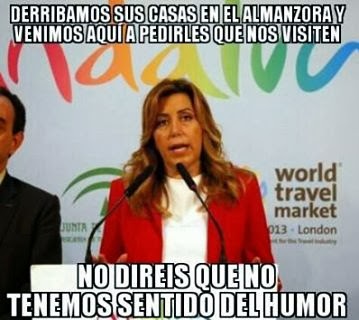 A funny picture I found on Facebook (where there are many angry comments, both from the British and from the Spanish). The scene is the World Travel Market in London (although this week is the FITUR in Madrid) and the picture is of Susana Díaz, the new President of the Junta de Andalucía saying -we knock down their homes but now we are here to ask them to come visit.
You see, in far off San Telmo, the palace in Seville which houses the Andalucian Government, decisions are made daily which affect the lives of people in Almería.
Posted by Lenox at 6:50 PM No comments: 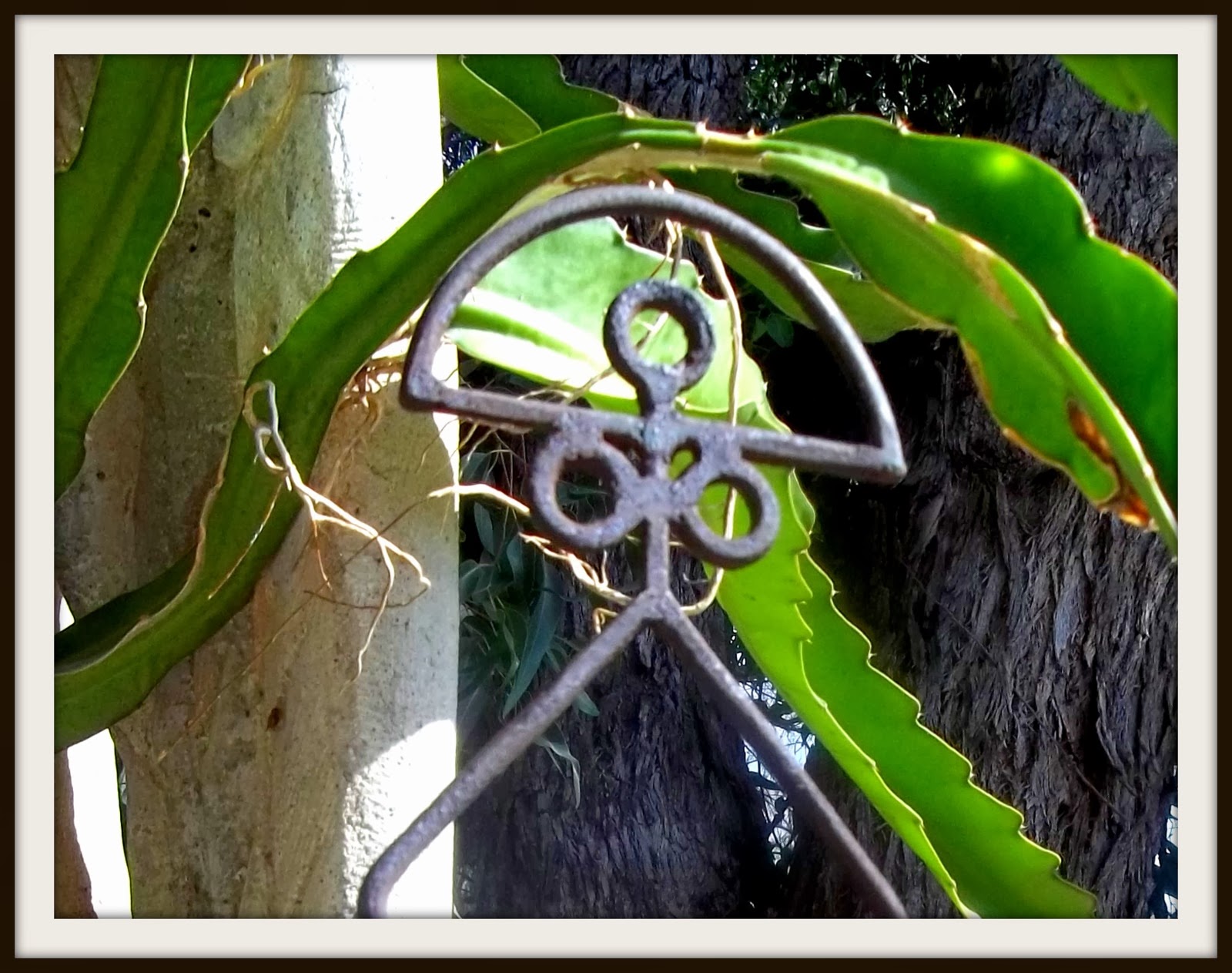 The Indalo is the old totem from Mojácar. Forget about all that stuff from the Cueva de los Letreros up towards Vélez Blanco, the little fellow is a local protection against the elements and sometimes bringer of good luck. He used to be known here as the hombrecillo mojaquero and was painted above the doorways as a charm. Worked a treat, with his protective bóveda which keeps us from harm's way.
Only problem is, of course, that the Indalo is really an Indala.
In olden times, the Gods ran the violent side of things - storms, thunder, lightening, war - and the Goddesses were in charge of shelter, warmth, agriculture, sex and re-birth. They protected us from the elements.
You will note that our little figure is standing in a certain way that denotes Woman.
Her legs are open.
The Indala, bless her, is a female.
Posted by Lenox at 9:56 AM No comments:

Dancing with the Priors 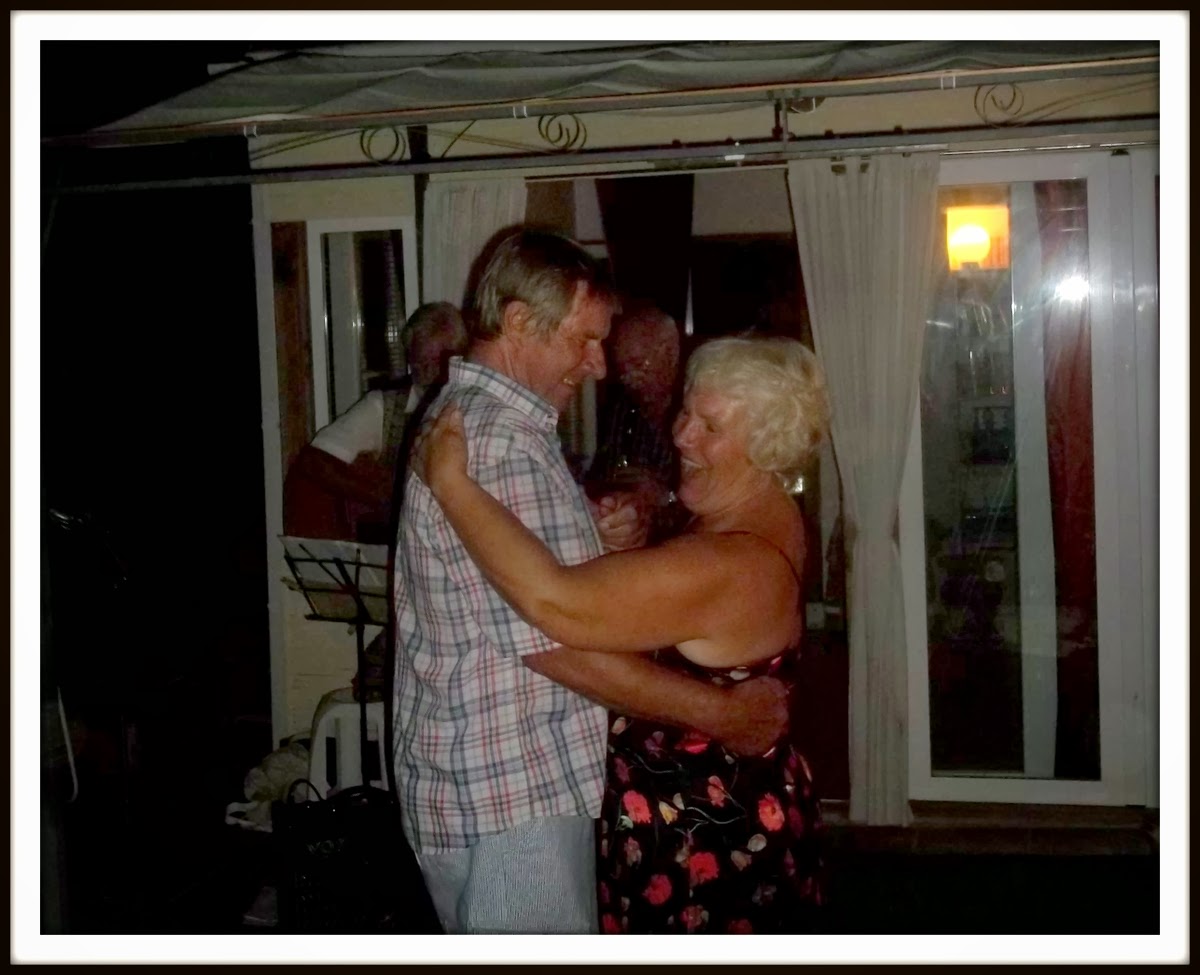 This is a picture of a retired British couple enjoying a birthday dance outside their home in Vera, Almería, sometime last September. The 'Dream': to retire to Spain, buy a house, a car, furniture and possessions; to dine under the stars in quaint little restaurants, enjoy a bottle of local wine, travel around the country and stay in a few hotels. The chance to broaden one's horizons and spread a little wealth among one's new neighbours...
Silly, really, but there are upwards of 750,000 Britons, and many many other Europeans, doing just that in Spain.
But this couple is different from those many hundreds of thousands of foreigners, rejoicing in their new life in what should be Europe's answer to Florida. This is Len and Helen Prior, whose house was inexplicably demolished by the Junta de Andalucía six years ago, on January 9th 2008. Since then, Len and Helen have lived in their garage, which unaccountably escaped the attack. Now, they also have a tent, which is just as well, as they have been camping in their own ruins following the loss of their home. Their water comes from a hosepipe and their light is provided by a generator.
The most famous 'English' residents in Spain, as far as the Spanish are concerned, are Richard Vaughan (who is an American and provides English classes over the TV) and Michael Robinson, an ex-footballer and now Spanish TV pundit.
Yet, the Priors are infinitely more famous. Unwillingly perhaps, as all they wanted was to retire peacefully in a country they thought was safe, but Helen and Len have occupied more column inches and more minutes of TV time across Europe than any other ex-patriate couple, ever.
Now the Junta de Andalucía, apparently eager to impoverise still further the province where the Priors chose to live, with its 38% unemployment (far higher in the small towns of the interior) is demolishing more British owned homes in Cantoria and threatening to do so in another dozen small, moribund, dry, hopeless towns of its far-away satrapy of Almería.
The Priors meanwhile have put on another piece of dance music... .


Later: The article appears in Spanish at El Ideal.
Posted by Lenox at 7:13 PM No comments: 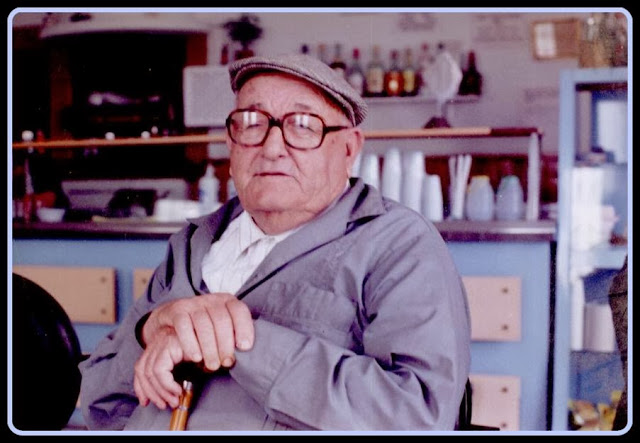 This is Jacinto Alarcón. He was the famous old mayor of Mojácar who got the village 'going' in the sixties. Following the Civil War in Spain, plus a drop in the local water table, there was no future for a forgotten town like Mojácar, which by the end of the fifties was down from a population of 6000 (recorded in 1920) to a miserable 600 souls.
Many mojaqueros had left for work (or political considerations) to Catalonia, France, Germany and even Argentina. The town was so miserable that there was talk of Mojácar becoming part of the municipality of Carboneras.
The representative of the national government was the Gobernador Civíl, who lived in Almería. His office chose the mayor in those days, and Jacinto was given the job in June 1960.
Jacinto was a rarity in Spanish politics, he followed his own version of the Kennedy doctrine ('Don't ask what your pueblo can do for you; ask what you can do for your pueblo'). He more or less, pace a proper article later, introduced the Indalo; encouraged culture and art; painted the town white (it was brown yeso coloured before); gave away old houses or land to those who would bring in money and fix them up; arranged with an architect (Roberto Puig from Valencia) to keep strict rules on the appearance of the town; got the town a Parador Hotel; made friends with several internationally known people, including Fraga Irribarne (at the time, the Tourist Minister for Spain); won the town an award from Madrid as the Pueblo Blanco 1964; and found new residents that would make Mojácar more famous internationally than the province of Almería itself.
Jacinto retired in 1976, a poor but satisfied local hero. We would never see his calibre of politics again. Following his departure from the town hall, the opportunities of ready money proved irresistible to many local would-be politicians and entrepreneurs, particularly builders, none of whom appeared to harbour any respect whatsoever for their town.
Many emblematic buildings have been demolished - the village theatre, the fountain, a famous arch called 'El Arco de Luciana', an entire city block last year to make way for an underground parking... and architectural rules have been relaxed or even, on occasion, abandoned completely (the Centro de Artesanía for example).
Incidently, the iconic Indalo, the upright metal man that was known in Madrid and Valencia, and from Belgravia to Greenwich Village, was later sold to the provincial authorities by another mayor, which is why we have a 'drunken Indalo' substitute these days. Cheap hotels and the accent on second-rate tourism (plus the chance to build and sell small and tasteless apartments) rather did for the town by the mid eighties. Jacinto died in around 2001 and the mayor of the time, Salvador, did him the ultimate honour... of knocking his house down.
Posted by Lenox at 1:19 PM 1 comment: