This Whole Thing About Parking 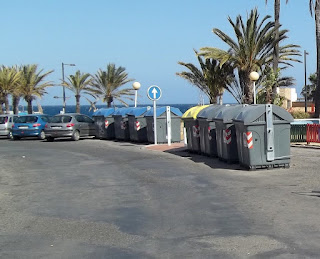 Down at the Parque Comercial in our town of Mojácar, there are three stories full to bursting with shops, bars, restaurants and offices. The notary, three or four lawyers, a dentist, a doctor, six bars (I think), a couple of restaurants, tickytack souvenirs, fancy shops, boutiques, three telephone shops, a couple of radio stations, an internet shop, a book-shop, a tattooist and a bank. A large furniture shop and a giant supermarket. A lottery and a beggar. Right next door, there's a second shopping precinct with more bars, a slot machine place, the post office with 1500 post boxes, the Euro weakly office and who knows what all else. The two malls rely on one small parking area surrounding the first of them. By around ten in the morning, when the staff are all in attendance in their various places of business, there is no room for customers to park. This is called 'bad design'. It happens. To exacerbate things further, there are a number of things taking up the few parking spaces (everybody already ignores the yellow lines). These are the bins and skips. Together, they inconvenience some ten cars or so, who will either park nearby, or will go to Garrucha which has a better selection anyway.
So how is it that Mojácar, with 72Km2 of space, an average of about 100 inhabitants per square kilometre, one person per hectare, manages to plan its parking so badly? Narrow residential streets festooned with parked cars making them all one-way (at best). A range of hotels and a golf course with an obligation to drive one way, right through the whole entire urbanisation, as the designers apparently forgot entirely about traffic and the width of roads. They finally had to remove half of the grass along the front just to add an extra parking area.
A village with a spanking new parking lot used as a market on Wednesdays. The Fuente - where another market runs on Sundays, with cars clawing onto the cliff beside the road down towards the beach. There's a roundabout at the Fuente which defies description; so people park on it. On the Playa again, a thin two lane blacktop runs, over innumerable traffic mounds, from Garrucha to the Hotel Best Indalo (I hope never to see the Hotel Worst Indalo), a distance of eight or ten kilometres of chock-full traffic during the summer, mostly looking for a parking space (while watching out for the traffic police).
When you can park - in a cramped spot which as often as not was never designed for that use - you may find that you will have to 'get out of the other door', climb over the gear shift, then walk to your destination.
It's fun though - especially now, when things are quiet.
Posted by Lenox at 11:17 PM No comments:

A Small Problem With Bugs 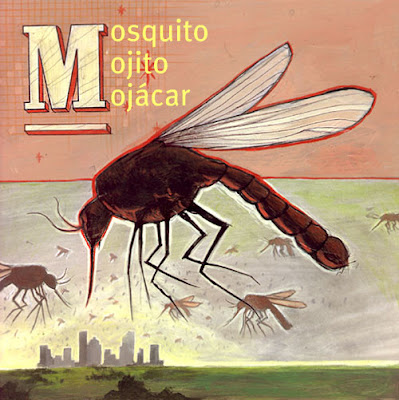 One exhausted Swallow arrived today from Africa and perched on a pole near our gate. It may be just the first of what appears to be rather a late arrival by the rest of the Gang, or perhaps - things being what they are - the only one that made it across the Mediterranean without ending up as pot luck somewhere.
At any rate, there's no rest for the wicked, and there are a whole lot of mosquitoes - three different varieties of them - to feast upon. So, Little Swallow, get off your feathered backside and get busy.
We are being eaten to death!
Posted by Lenox at 9:36 PM 1 comment:

Roads, in a Roundabout Way

What fun it must be to design a roundabout. Sometimes they are located in the middle of a road, with other roads leading off in different directions. You must slow down to eighty sixty forty thirty and that car parked on the right, the one with a fellow sat in the passenger seat, he'll be a radar cop ready to repair Spain's GOP at your expense. Sometimes, though, the roundabouts are just there, interrupting the smooth flow of the road without any reason or any other exits. Perhaps there are some municipal plans we don't know about. One day, there'll be an urbanisation. Perhaps somebody will be parked on the edge of the roundabout, sat in his enormous and unnecessary 4X4, as a temporary decoration.
Still, these traffic circles, with their two lanes - down from three or up from one - are fairly humdrum. European affairs. Even the overwrought gardening, designed to hide the vehicular flow from the left, hardly makes them intriguing.
Much more popular here are the 'shy circles', those roundabouts that touch rather than intersect. These are used as a complicated and confusing method of bleeding onto another road, usually by obliging you to zip across half its width and then, breathlessly, joining the speeding traffic from the left and dovetailing in behind the red BMW that ain't stopping for nobody. Then crank it before the lorry coming up catches you with a roar on its air-horn. Confusing but rather satisfying I think. There will be no badoom badoom road studs on the approach to the shy roundabout, but the main road which hurtles past will have any number of rows of these charming studs, to entertain and bemuse drivers hurrying past the eccentric circular bifurcation.
These roundabouts, whether true or shy, are designed by young achievers in the second year of high school. They are rewarded with yellow stickies to put on their exercise books. First year students cut their teeth on petrol station forecourts, where a large expanse of concrete will be decorated with obtuse traffic routes, stops, bleeds and parking areas.
Favourite local ones: the Los Gallardos to Garrucha road has three shy roundabouts, all very dangerous indeed. Turre has a hidden shy roundabout, covered in rampant plant life. There is no view whatsoever for drivers of on-coming traffic coming from the left. A right-of-way route powers in from the right.
For a gas station forecourt, nothing beats the Ballabona on the motorway between Vera and Huercal Overa. Several hectares of cement have been turned into a horizontal snakes and ladders set. Most enjoyable to ignore.
But, fresh from our labours driving around the immediate area, why not come and shop in Vera? You can leave your car in the handy underground parking lot which has just been opened. Apparently, a British firm got the tender, since you have to follow a cross-flow into the establishment, going from the right lane to the left. Now, that puts the fun back into motoring.
Posted by Lenox at 6:04 PM 1 comment: 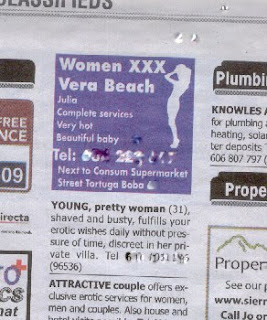 Anyone can make a mistake. Once we were putting together a newspaper and managed to spell our own name wrong. 'The Enterainer'. Took a while to live that one down. Then there are those mistakes which have two meanings, or don't really work as titles. You can buy books full of them at PAWS sales.
But here is one that must have missed the proof-reader's eye. It is the only possible explanation. It's in one of our local newspapers in the classified columns and follows right after a notice which says 'Readers of a sensitive disposition may find some of the advertisements in this section offensive'.
Boy, they may have understated themselves on this one.
Posted by Lenox at 8:08 PM No comments: 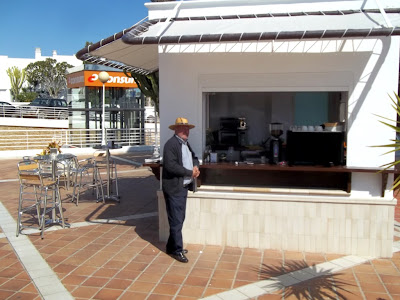 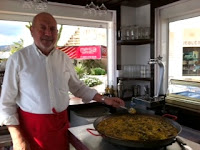 Ángel Medina has lived in Mojácar for about twenty five years. He built what still remains as one of our best small hotels, the Rio Abajo. He has worked in publishing (he was the director of El Indalico) and in radio with Cope Mojácar. He has also been in local politics, running both cultura and turismo in the last two legislatures.
Ángel is from Valencia, and is well-known locally as a cook and bon viveur. So now, he is running El Kiosco, the kiosk outside the Parque Comercial on Mojácar Playa.
Today, he made a paella.
Posted by Lenox at 11:49 AM No comments:

Spain has four special names for unknown or forgotten people: these are Fulano, Mengano, Zutano and Perengano. The most used is Fulano, 'Whassisname', which comes, apparently, from the Arabic: fulān which means 'anyone'.
Mengano, or 'Whojammie', is also from the Arabic man kān and means 'whoever'. The other two names, 'Thingy' and 'Spike' are used less. The first, Zutano, may come from scitānus, Latin for 'wise one', but it's anybody's guess about Perengano.
The Spanish use these names for handy reference, Fulano and Mengano above all.
The diminutive version, Fulanito, is particularly useful for jokes, along the lines of 'little Jimmy'.
The female of Fulano, Fulana, is used (as is always the way) pretty much exclusively to mean a puta.
And now, looking at Wikipedia, I find all sorts of other versions, in every language: including Miðalhampamaður from the Faeroe Islands.
I know, time to go and do some work...