Headline: The Spanish Holiday Property Market. Reports of its Demise (Apr 07) are Over-Exaggerated

Listening to and reading reports this week about the recent slump in Spanish Construction companies stock on the Spanish Stock Exchange and the imminent demise of the Spanish property sector instantly brought to mind the well known quote that I have used in the title. The British press and television coverage has been quick to link this correction to a crash in the property market for holiday property in the coastal areas, (Costa’s), and the dangers for UK citizens purchasing property in Spain. (Association of Multiple Listing Agents. Unsigned. http://www.amlaspain.com/p-spanish-property-crash-art07.html)

Despite rumours to the contrary, the glowing embers of the troubled Spanish property market look set to flicker back into life with prices stabilising and likely to grow steadily in the future. It looks likely that the negative speculation within the Spanish property market has finally ended, with increasing numbers of Britons still heading out for a new life abroad. (Soltimes P 32 current issue: unsigned)

Comments?
Posted by Lenox at 11:32 AM No comments:

Tomorrow, Sunday, we celebrate Thanksgiving Day – ‘el Día de la Gracia’. Most of my family is American so it’s a regular celebration in our particular ménage. We’ll be putting some fourteen stalwarts around the two tables where they will be expected to eat and drink until they actually can’t move. It’s a kind of early Christmas, with turkey, stuffing, mash, yams (a funny orange vegetable that the Americans swear by), peas, gravy and so on. Cranberry sauce. Gosh – I hope they didn’t forget the cranberry sauce! We’ll have pudding. We’ll drink our way through the wine although, apart from perhaps contributing to our sleepiness, the alcohol won’t be able to get past the barrier of the yams and mash into our livers and brains. There’ll be blazing logs in the fireplace. The dogs will be fast asleep on the sofa, overcome by the heat. Outside it’ll be cold and getting dark. Perhaps a little rain.
It’s always struck me as a good idea to celebrate the event. First of all there’s a good meal and copious turkey sandwiches to last over the following few days. Secondly, it’s a holiday which doesn’t have much commercial paraphernalia wrapped around it unlike the increasingly bothersome festivities to come. Thirdly, in our household, it’s always celebrated not on the penultimate Thursday of November but on – or near – a much more important date. My birthday.
Thanksgiving is of course a celebration to remember the early American settlers, who apparently lasted a year in some God-forsaken spot on the North East corner of New England. After twelve months of doing whatever one does in such a place, when there is no Wal-Mart nearby and where a few of your neighbours have been eaten by bears, it’s good to mark the anniversary and to invite the rather well-fed Indians from across the Crick.
As long as they bring some food with them.
I think it’s a fine reason for a celebration. I think that all the foreigners who have had the luck or the planning to wash up on the shores of Almería might consider setting aside a special day for just the same reason as those original pilgrims to America once did.
To thank God for their deliverance and good fortune.
Posted by Lenox at 7:11 PM No comments: 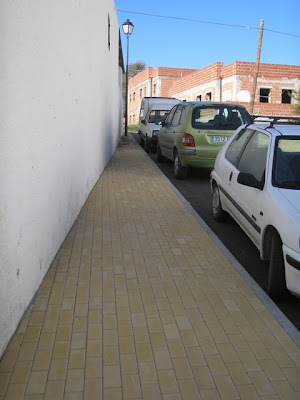 No, it's not an optical illusion. It's a Mojácar pavement.
Posted by Lenox at 9:20 PM No comments: 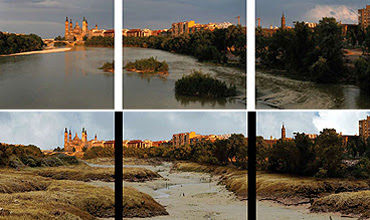 Greenpeace has built a montage of the possible effects of global warming with these pictures from Pedro Armestre and Mario Gómez. The town is Zaragoza. You can read the story here (en castellano) at Zaragoza.
Far fetched or not, in El País today, a story appeared about the contamination of the different power stations and so on in Andalucía and our old friend, the Endesa plant in Carboneras, turns out to be the dirtiest with 3.2 million tons annually of CO2. There are seven outfits that produce over a million tons of CO2 in Andalucía, Endesa leading the way with the Almería plant - to rise to 3.6 million tons in 2009 - followed by their Los Barrios, Cadiz plant at two million tons.