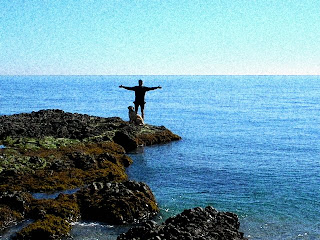 There we are - either me or my son on the playa a few days ago. With dog.
There's talk on the forums about whether one should wait another year or two before buying a house in Spain and moving out here to live. Perhaps the prices will fall a bit more.
Well, perhaps they will. However, are you going to stay another couple of years living in the UK, with all those amusing things going on there - thirteen year old fathers (worth a million quid), Big Brother (both the George Orwell version and the dreadful TV show), a finance minister called 'Darling' and... well... the food! Come on now. Seriously!
Another couple of winters? I've seen the weather forecasts on the telly. I know what you're going through. The best houses over here are going to be snapped up while you're still wondering if you'll still have the energy left in a few years to dig yourself out with your snow-shovel and escape to the sun.
Posted by Lenox at 9:31 PM No comments:

Now, concentrate here, because I'm only going to say this once. Our 'locally elected representives' don't have a clue.
Yes, I know we are in a crisis, particularly here in Mojácar, where there isn't enough funds in the town hall to pay the 135 employees plus eight councillors their fourteen payments per year, plus social security. Spain, as the Gentle Reader will be aware, introduced the idea of two (or sometimes three) extra payments for the staff during Franco's time. When it comes to trashing the old sod, the workers are ready with their rocks and banners but, please don't raise the subject about the extra payments, muchas gracias. Or how public employees, known as funcionarios, have their jobs for life. Both measures introduced by the mad Generalísimo.
So, Mojácar, a town of 8,000 inhabitants and with its employees, mostly taken from the families who were briefly... indecisive when it came to voting on local elections over the years. Now, since the money is getting scarse - no more building licences for a start while the crisis grinds on - the town is having to cut back.
Can it pay the school-bus company, for example?
Enter, stage left, the Government. José Luis Rodriguez Zapatero has released monies to all the town halls of Spain, according to their size (as counted by the padrón, the town hall registry), to create some employment and generally let us subjects and vassals know that they are fondly thinking about us up in their ivory towers.
Cake, you might say.
In fact, of the 8,000 million euros earmarked for us townies, an impressive 2% - that's 160 million euros - will be spent on billboards to remind us of the Government's generosity.
Each town has a plan to spend their own particular wallop - and no doubt, another plan as to where to site the spiffy government billboard.
In Mojácar, where we have a crisis of monumental proportions, we are going to spend our 1,200,000 euros on, of all things, tarmac.
You see, we once had a football field. It's actually the old cemetery up in the pueblo, but, and I've boned up on this, it's been a football field for better than half a century. Since our team is crap, it's actually done service as a parking lot for the past ten years, plus as an amusement park during the fiestas and a market-place on Wednesdays, weather permitting, since moved further down the hill. The team, or at least those of our young men who enjoy soccer, can practice in Garrucha next door.
The Campo de Fútbol was therefore used as a car-park, an overflow for our mountain village with its narrow streets and rare parking spaces. The shop-keepers, bar owners, 135 town hall employees and so on used most of the spaces, with the remainder going to the visitors, the punters, the customers, tourists and ordinary residents who make up the balance of local society.
Then, a couple of years ago, we despatched the football field once and for all by building a huge swimming pool and indoor sports-centre which took up almost half of the space, plus a swanky plant nursery with an electric roof and hydroponics for the kids to study nature. We were left with half a football field - or, if you prefer, half a car-park, which, with the same number of town hall employees and bar owners as ever, left no space for the thirsty visitors and their cars.
Well, our Lords, (Ladies) and Masters said, we are going to build a three-storey car-park on the half of the football field that remains, bringing the parking back to what it was before.
But they didn't because no one would pick up the tender.
However, the nursery was soon abandoned because no one would look after it. Then, as the crisis bit deep, the sports centre with its somewhat redundant swimming-pool was left unfinished - at least until happier days - and more building licences - and the moderately superfluous solar-heating was never installed and we were left with... half of the car-parking space we had five years ago.
Besides being well out of pocket.
So, the bail-out money that the Government is graciously sending us... is to be used to tarmac the surviving half of the municipal parking lot (can't have them leaving their cars on gravel, now, can we?). Hard thought must have gone into that one.
What the hell - I'll say it again. Our locally elected representatives just don't have a clue.

Later: So, what has your town hall spent its wallop from the Government on? See here.
Posted by Lenox at 9:11 PM 4 comments:

I've been in Madrid for the past few weeks and have just now returned to the coast - the 'costa' as it's known by us high-rolling Brits with our innate command of foreign languages. The costa. Down here in our area, which has the largest power station in Andalucía just along the beach - which is apparently building up its output to 2,500MW of coal-produced energy for our distinctly small community - we are continually surprised by power-cuts. Those brief click-clack ones which bugger up the fridges and switch off the televisions and so on. Lots of smog, too, considering that half of our reach is plain sea and the other half is mountains with a few casas scattered around here and there. Casas. Homes.
I asked the local head of the power company about this a few years back (they were putting in giant electric towers along the dry riverbed at the time - including one behemoth which was just a few metres away from a private home) and was told that the power cuts came about when all the birdies were sat together on the cables and - whoosh! - took off all at the same time. Click-clack.
I still don't believe him.
However, despite the monopolic electric company's recent price hike and new monthly billing (and bi-monthly meter-reading), things haven't improved much.
Here we are. I've got the telly on, watching a piece about how the pound is going down against the euro or, tired of that, some unlikely American escapist dribble on Ch 21 when - click-clack - the power goes for a second. The computer is OK - somebody once gave me a battery doohickey - but the telly dies on the spot. Let's see: find control. switch on. warm up. tune to 21. press knob to change language to English (so much for our polyglotism).
No - we're on the stupid adverts.
Whether it's good for your electric kit to have a power surge come along several times a day during many years of use or not is a question which the complaints department of the electric company - if only there was one - would no doubt be well equipped to answer.
Meanwhile - I'm off down to the beach - the playa - for a beer.
Posted by Lenox at 6:21 PM No comments: