Dumping on the Customer: Oh Yeah! 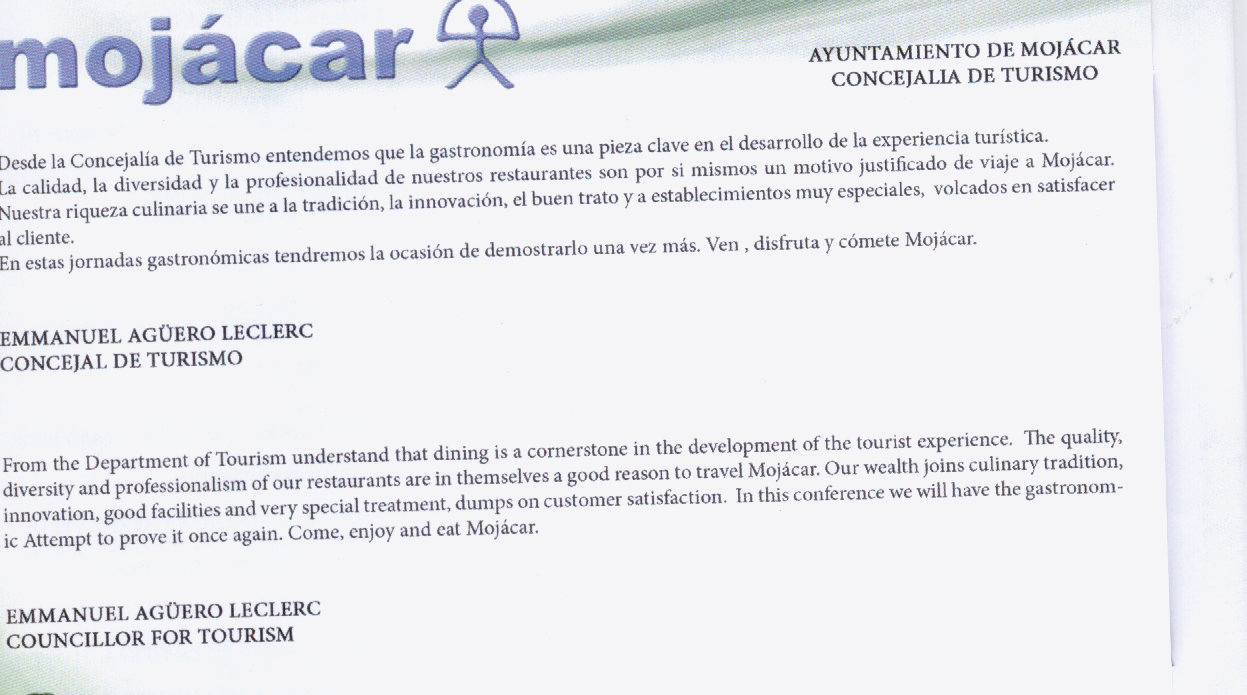 Harping on the same subject once again - that the pueblo Spanish don't appear to want to check their traductora de Google with a native-speaker (of which Mojácar is strongly blessed) - we find that a popular beer company is paying for a promotional exercise involving fourteen local (local) restaurants with a translation to die for.
And somehow, it'll all be our fault.
Posted by Lenox at 9:15 PM No comments:

This thing about spending good cash on making an advert, a billboard, a leaflet or a campaign and not checking the spelling with one of the English-speaking people in our town (being in the majority, we aren't that hard to find), is enough to drive somebody to dink!
Posted by Lenox at 11:15 AM No comments:

Five Destinations in The Almerian Countryside

Seeking adventure, we decided on Friday to visit five 'off the beaten track' places that were advertised in the 'Mojácar and area special' that appeared in the latest Olive Press, the main English free newspaper for Andalucía. 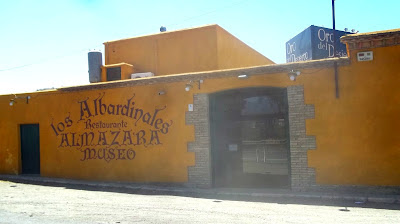 The first was the Oro del Desierto, an olive oil manufacturer and bottler, which also holds a beautifully appointed shop/restaurant on the Tabernas end of the N340 Sorbas/Tabernas road, just past and opposite the now sadly depleted Venta del Compadre. Here we met the owner Rafael Alonso (speaks good English) who showed us around his empire and explained about the difference of the four different kinds of olives he grows on his plantation in the hills behind Sorbas. We bought a couple of bottles of olive oil for our breakfast table (on toasted Spanish bread, dribbled onto crushed tomato followed by a sprinkle of salt) and admired his menu. The restaurant, Los Albardinales, is open for lunches and, by reservation, for dinners - closed Thursdays. 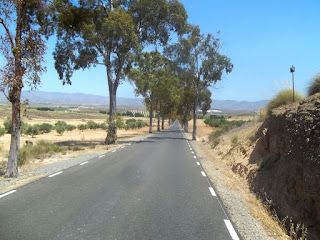 Following our visit, we headed back a short distance towards Sorbas and turned off on a minor road towards Lucainena de las Torres, a pretty, white and forgotten village in the low hills behind Nijar. Here, our destination was the Venta del Museo, a well-known (in a secretive sort of way) German-run restaurant and hostal. Beautifully and imaginatively decorated, this restaurant was run for many years by HansPeter Wohler who famously had a unique wine cellar. I asked the new manager Stefan what had happened to the collection. All gone, he said sadly. Lunch here is a treat, so don't be shy.
The third place on our list was a small 'hippy' retreat, a type of rural hostal, called El Saltador and run by Claudia Scholler. From Lucainena, head towards Nijar but turn off to the left after a couple of kilometres towards Polopos. Claudia has regular exhibitions and flamenco concerts in this out-of-the-way spot - a small exhibition of the late American master Fritz Mooney paintings is currently running there. Claudia was just serving lunch to her guests so we talked for just a few minutes and promised to return. She sent us on towards Polopos on what turned out to be a stunning trip through a fantasy of mountains, gorges, ruins and desert, along a narrow road converted from a single-gauge miners' railroad. If somebody came the other way, we'd still be there today.
After arriving safely in Polopos, a one-donkey village, the road dipped along a river-bed and eventually and obligingly deposited us on the roundabout behind the Venta del Pobre petrol station and restaurant. 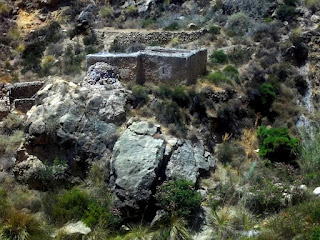 We crossed the motorway and headed down into the national park towards Agua Amarga, breaking off that road to head west to Fernán Pérez and on towards Cabo de Gata. Lunchtime loomed and I wanted to stop at the La Gallineta restaurant in Pozo de los Frailes (Tel 950 380 501). This is a small village just a couple of kilometres short of San José and La Gallineta, owned by Pedro from Alicante and his English-speaking son, was going to serve me dentón, a kind of deep-sea fish (apparently called 'dentex' in English) which was (as our Danish neighbour Paul Becket used to sometimes say) 'fan-flaming-tastic'.
Our fifth and final stop - it sounds like a treasure hunt - was another rural hostal, this time the Cortijo la Tenada which is located behind the miniscule village of Los Albaricoques. This small retreat is run by Umberto and is as quiet as it gets.
'Quiet' is not a word to describe the inappropriately named Campo Hermoso, where the national park suddenly switches into intense plastic farming and where the visible population appears to be a massive number of North and Central Africans peddling around on bicycles. We were lost for the first time that day, driving through endless passageways between abandoned plastic greenhouses. Finally, we found the motorway... and accelerated towards home.
Posted by Lenox at 7:56 PM No comments:

Mojácar is Noisy Fun for The Moors and Christians 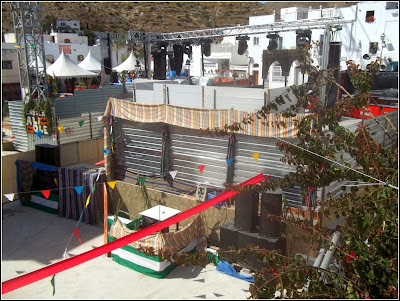 This is the scene from an upstairs window overlooking the new and not yet named square by the Church in Mojácar. The famous underground car-park. Top left: a bar and stage. Top right: a bar and stage. Lower right: a bar and stage. These correspond to three of the seven kabilas that are crammed into Mojácar over the weekend, which, together with the main act in the Plaza Nueva, strolling musicians, the musketeers (trabuqueros), the powder-monkey with his fireworks and thunderflashes plus a number of music and disco bars, are all contributing gaily to make the town decidedly noisy at present.
The only scientific way to stop noise leakage from a competitor, is to turn your own speakers up. Loud.
There are buses running all night and there's a superb procession on Sunday afternoon with over a thousand brightly dressed participants, together with yet more musicians. Bring suntan oil and cameras.

Rajoy at the football match in Poland, waving his arms in excitement as so-and-so scores a goal. Spain draws with Italy, one one. People complaining that Rajoy should be back in Madrid, since Spain has just got its new line of credit for 100 billion euros. But there he is, with the Principe.
God, I hate football.
Here, as every four years, louts drive around with flags sticking out from the windows of their cars, Spanish flags and an occasional English one. People firing off rockets when somebody scores a goal, honking their horns, the newspapers full of the football, which is as ephemeral as yesterday's weather forecast.
So Rajoy, ungainly in his box in Warsaw, or Gdansk, jumping about as if he were a fan. Spain might be a second-rater in politics, finance and influence - but she's first rate in sports.
Meanwhile, back on the coast, a couple of our grimmer local red-top English-language newspapers have produced cut-out-n-keep centre-page spreads on the European football championships. All we need is a couple of thumbtacks and a spare bit of space in the den next to Britney and the Spice Girls.
Posted by Lenox at 12:18 AM No comments: