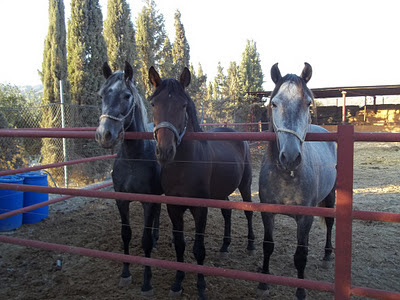 A Day in Granada, with Friends 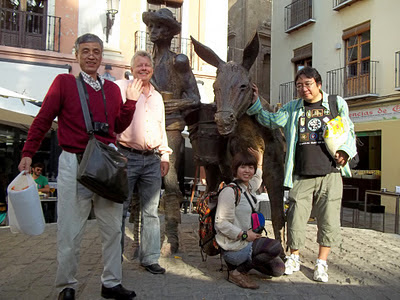 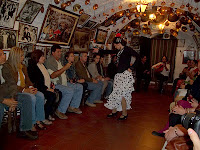 Barbara is now getting the Animo work with hippotherapy going again, and we now have a new therapy horse here in Mojácar (see Animo) . As a small part of this, we went to Granada yesterday to meet a Japanese friend who works in a similar field at the Tokyo University. Aki speaks some English, and his uncle, here on the left of the photo, speaks a bit of Spanish as part of his studies into Flamenco. So, as they had a spare day or two before returning to Madrid (and on to Vienna), the three of them (that's Student Nim in the middle) were able to spend some time with us - which, ineviatably, included a visit to the caves of the Sacromonte to see some real Flamenco.
Posted by Lenox at 7:18 PM No comments: 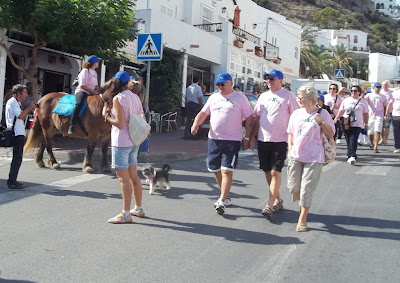 A large group of people turned out today for a walk from Mojácar Pueblo down to the Hotel El Puntazo to support the Spanish cancer association. Among them was our mare Cuqui. You can meet her over at Animo.
Posted by Lenox at 8:16 PM No comments: 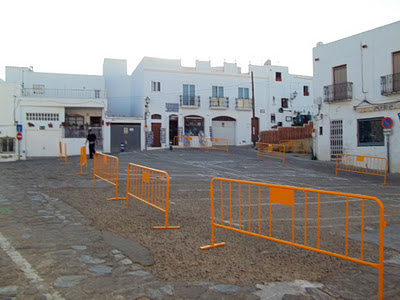 This is the square in the old part of Mojácar that is being made-over as an underground car-park. In the picture, taken last Thursday, the square is, for once, without any cars. It looks rather better than usual. Will it look like this (smarter and so on, but similarly spacey) after the work has finished... sometime next Spring?
One must hope for the best, while recognising that our ayuntamiento and its alcaldes have never managed to improve the pueblo in thirty years of attempts (atentados, a good mis-translation) . Much has been written elsewhere about this project (the estación de metro) which has the unqualified support of the local Partido Popular: members, supporters and honorary Romanian Glee-clubbers; with the horrified resistance from everyone else, including those who chose to live in Mojácar because of its beauty, magic and appeal.
Still, they had their chance in the local elections last May.
The house on the right of the picture, with a whimsical no-parking sign in front of it, was our old house, bought new off a very young Juan García in 1966 for the peseta equivalent of 540 euros: two apartments, upstairs and down. I stayed upstairs for the school holidays while my parents were there full-time. Downstairs, a Frenchman called Michel rented for 18 euros a month, which he could rarely afford, preferring to bring along a melon on the first of the month and then stay for dinner.
We eventually sold the place to Joan Noble (an artist type with hair died a fetching shade of blue) and she lived upstairs and rented out the downstairs to a succession of restaurants and bars. The town hall was the final buyer, buying it earlier this year for a fortune, so as to have clear title to knock it down (a figure not reflected in the latest budget for the final tally of the underground car-park).
Behind the now demolished block, is a flash of brickwork. This is the relic from the same Juan García's demolition, as mayor, of an old ruined house there which was built over a narrow street-tunnel - the famous Arco de Luciana, known in English as Lucinda's Arch. Lucy was a Mojácar girl who fell for a Christian prince who died in battle in 1488. She promptly threw herself to her death (or perhaps tripped over the entrance to the tunnel, built in around 1890). Never mind - it was pretty and attracted tourists with their cameras.
After Juan idly had it knocked down, a succession of mayors promised to replace it. Salvador, Carlos, Gabriel and Rosmari. None of them ever did - or ever will. Even - and here's a thought - by putting it somewhere else. Luciana wouldn't mind.
So, as work begins on the upper square, dooming the casco viejo to an eternity as a non-pedestrian village, the mayoress admits in a sparsely attended pleno (there were four of us), that she doesn't like the final plans for the square's embellishments either: stone sails to soar above the streets.
Posted by Lenox at 8:17 AM No comments:

Food and Some Sex 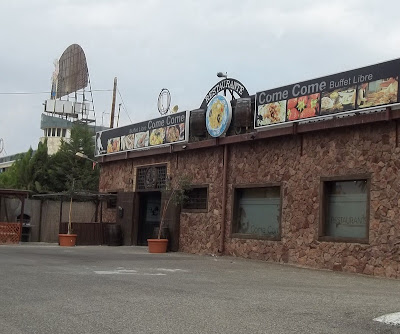 At the risk of being thought a bit smutty - here's a picture of a poorly-named restaurant - or maybe 'snack-house' might be better - which adjoins onto our local knock-shop, the Hotel Argar on the outskirts (damn, I'm doing it again) of Vera.
The delightful name of this establishment, clearly readable on the photograph, means in Spanish of course 'Eat, Eat'.
But, what is on the fare this evening (after a strenuous session next door)? I don't know what you're having, but I'm winding up my meal with a brandy and, as a special treat, a piece of the tarta de la casa.
Posted by Lenox at 8:29 AM No comments: