Bédar is a small white village in the high hills of the Sierra de los Filabres, overlooking the wide plain of Los Gallardos, Antas and Turre which is rimmed on the other side by the concurrence of a few descending mountains, the final one covered by the white cubed houses of Mojácar, with the Mediterranean Sea beyond. Bédar was a mining village, peopled in its day by the Moors, and re-discovered by the British in the 1880s when they set about opening up a number of hills between Águilas and Bédar looking for iron, copper, silver and other minerals.

By 1966, when we drove up the dusty track to the cracked and sun-bleached village, overlooking the empty mining buildings abandoned forty years before, there was just a few people left, hanging on with some small agricultural work or merely abandoned and living on smaller pensions while their lungs slowly subsided under the ravages of emphysema.

There was just the one bar, run by Pedro, an old man with a large chin who shuffled about in his carpet slippers and spoke a few words of broken English. That first time my parents and I went up there and had lunch, a paella possibly spiced with cat, washed down by glasses of Green Fish (a popular kind of Spanish gin, made in Murcia) with warm Fanta orange. The mayor happened by and, as far as my father could make out, introduced him to his hermano who may have sold him a line of village houses for 60 pounds. ‘I’ve either bought a house off somebody called Herman,’ my father admitted to his friends in Mojácar later that day, ‘or I had a very expensive lunch in that village up there’, gesturing vaguely towards the hills.

There were a few foreigners living in Bédar at the time, including a Dutchman and his Moroccan wife. The Dutchman collared my father the next time he braved the dusty track up to the small village. ‘You don’t want to live in this place’, he said, ‘there’s this mad Dutchman who has a house here and doesn’t like Englishmen’. ‘How interesting’, said my father, ordering another round of gin, ‘and what a curious accent. Where are you from?’

An elderly British poet called John Roberts lived in a house around the back of the village, in an area known as the Gypsy Quarter, with his mother. At the time of buying his place, he had neglected to buy off all of the family owners, inheritors in equal parts from some old miner, long taken to his reward. This meant that Roberts shared his house not only with his mum, long time suffering from dementia, but with a truculent couple who weren’t clear if they were gypsies or not, but knew that they didn’t like foreigners.

Howard the American hippie lived in the surviving wing of a ruin further round to the left. He smoked dope and lived off provisions he obtained from friends close to the American Forces PX in . He certainly carried a better brand of gin in his kitchen. 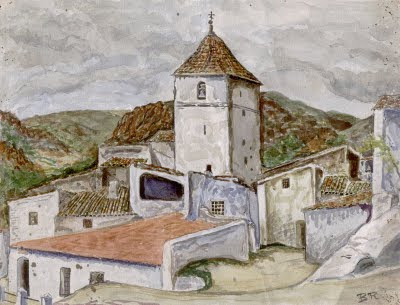 A British couple, retired as I remember from a rubber plantation in , lived somewhere below Pedro’s bar. The Rawlins said that they liked the tranquillity and the views. Mr Rawlins painted this picture of the church seen from the east (our three ruined houses were just out of view on the right) and gave it to my father with the following message written on the back:

‘To my friend Bill Napier, on the occasion of his birthday, . B.R.’

Having struggled through the highlights of the Sol Times and the Weenie, I was just preparing to leave the café when the distributor for the local Spanish freebie 'Actualidad Almanzora' showed up. Not as many pages as the other two, but at least the articles are generally interesting (and always about local issues, with no regurgitated news, waffle or tripe).
The page three opinion piece by Savaronola is always worth reading. It's a proper article rather than fifty words lifted from the Daily Mail and this issue deals with Mojácar's woeful attempt at tourism. I'm going to paraphrase his thrust below:

Mayor Jacinto started the ball rolling in the mid sixties with 'residential tourism', where people buy a house, fix it up, buy a car, kitchen goods, furniture, and then keep the local bars and shops busy the year round. This brings in continuous funds to the community and also - to stretch a point - brings in a certain amount of civic pride. The new residents want gardens, clean streets and some culture: theatre, concerts, exhibitions and so on.
But, warns Savaronola, in Mojácar, a few local people, uncultured but drowning in greed, looked for short-term profit and, having wrestled control of the town hall, they soon changed the town's direction towards apartment building (higher profits, although lower full-time occupancy), multiple 'pile 'em high, sell 'em cheap' hotels and a savage drop in the area's reputation abroad. They got their stash ok, those few - giving Mojácar the distinction of having the highest per capita wealth in the whole of Andalucía - if rather unevenly divided, but they never bothered much with improving their knowledge and culture.
Which is why we have padel-tennis competitions, a white-elephant football stadium, hotels at 32 euros with bed and three meals in the middle of August, several dying or dead hotels reduced to hulks (Moresco for example), overflowing sewage systems vented into the sea, and a reputation across Spain for botellónes and stag night parties. 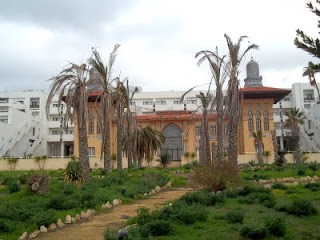 Unsurprisingly, Jacinto's dream (he got us a Parador Hotel) has been betrayed by smaller men.
The editorial compares Mojácar to some other small coastal wonders, like Positano, Capri, Portofino, La Rochelle, Dubrovnik, Santorini, Rhodes and so on, all towns where there is no 'crisis' to worry about, and laments that we were herded into a crashed and ruined Mad Max film-set instead.
So, as we continue to allow our leaders to betray us, with the casco viejo of Mojácar as the next victim, we can turn away our faces from culture, civic pride and harmony, and simply try to sell-up before the whole place collapses in shame and despondency.
When those few miserable mojaqueros, the ones who ruined this area simply to stuff their mattresses with oodles of cash, come to buy our houses and businesses at 10c in the dollar, and we are all cut loose again, where on earth will we go?

Strong stuff? You should read the original!
Posted by Lenox at 12:07 PM No comments:

Pizza in the Pueblo 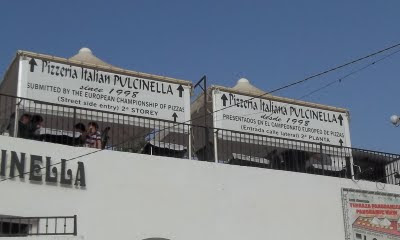 We had dinner in the Pulcinella the other night: four adults and two small kids. Basic spaghetti and pizza. The roof-terrace was packed and business must be good. They have a chap down in the street who approaches you as you arrive in the Plaza Nueva to send you upstairs. They also have a large sign in Spanish overlooking the Square, with a second, roughly translated into English. It would more likely read: 'Presented at the European Pizza Championships' (rather than submitted by).
Like many businesses here, they may not wish to consider employing a Briton for their occasional English posters and menus, but they seem happy enough when the shoe is on the other foot.
Posted by Lenox at 7:55 PM No comments: 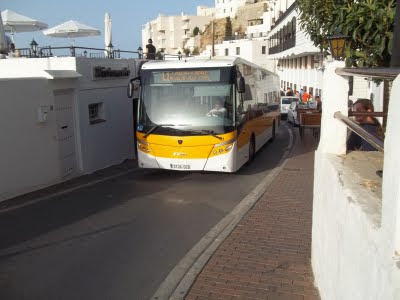 Here's the thing. When you have parked your car in the 'Campo de Fútbol', you must then walk up the Avenida de Paris to get to the centre of Mojácar. You will be sharing this narrow bit of pavement with everybody else, coming and going.
It's not quite one metre wide.
Posted by Lenox at 12:39 AM No comments:

In our small corner of enchantment, we are accustomed to occasional swells and troughs in the local population of varmints. An English-language newspaper recently mentioned the plague of flies which had swarmed out of nowhere, covering the outside in unbelievable numbers. Yet, by the time the report came out, the mass of flies had gone, returning to the usual status quo, which is a nuisance rather than a serious bother. Where did they all go to? Unlike the Chinese, who were reputedly told to kill a hundred a day, no doubt on pain of having their own wings pulled off, we manage to avoid keeping tally, relying on an aerosol spray to do the job.

I once bought a trap for flies, a plastic pack crowned with a hook and a cardboard landing area and with a small lump of damp rhinoceros shit secreted in the bowels of the package. A sure-fly success with the moscas. Within days I had about a kilo of dead and rotting flies in my swollen bag, hanging in the arbour. I had to bury the whole stinking mess at the bottom of the garden. A few grasshoppers came along to mourn.

One summer we have a plague of mosquitoes; another time – as this year – there don’t seem to be any. We may have locusts, a plague of them stripped Mojácar in 1906 causing a catastrophic famine here, or it may be a simple swelling in the population of fleas, or scorpions, or mice. This comes about either because the particular thing which eats them happens to be in a decline that year, or because the particular thing which the plague eats, happens to be in abundance. Nature will eventually balance things out, saving the environmentalists or the household bottle of insecticide the trouble. Our current problem with the palm tree beetle is that, because it comes from foreign parts, there is no local creature that likes to snack on it. Give it time.

At the moment, in our neighbourhood, we are troubled by ants. They are those little ones which like sweet things and, as we found out yesterday, they have a particular regard for Sugar Puffs. A long line of them crossed the floor of the kitchen, headed for the larder. Meanwhile, a rather more obvious line of pieces of cereal was jauntily marching along the other way, out the door and down a hole on the terrace.

We are also currently blessed with woodlice: also apparently known as ‘roly polies’. The Spanish ones are nevertheless rarely able to roll into a ball, and prefer to lie on their backs with all of their legs waving futilely in the air as they wait for someone, unknowingly, to pass by and grant them release from this vale of tears. ‘Crunch, crunch yuck!’ as one of the kids said with disgust last time we had the problem with this particularly pointless pest, around twenty-five years ago.

But plagues are always a short-term problem, controlled by the natural rhythm of the seasons. With a little patience on our part, we know that even the tourists will soon be gone and we will once again be able to enjoy our evenings without being obliged to wear some repellent.