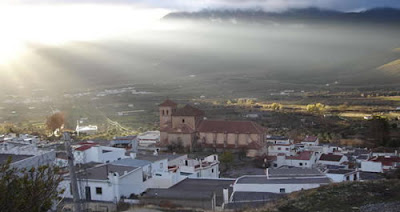 Here’s a piece that caught my eye (from the local daily newspaper): ‘The Comarca of Andarax has enough natural resources - scenic, cultural, economic, agricultural and gastronomic - to exploit a model to attract new tourists…’
A touch inelegant the text, perhaps, but it was the best that me and the Spellcheck device could do between us at a moment’s notice.
Tourism is the answer to all of our ills. A quick morning presentation, a chat with the local minister or councillor, a glass of ‘vino español’ and a tapa or two from the local ‘School of Gastronomy’ and all is suddenly well. We shall create jobs and be wealthy. The tourists are coming.
Spain has a touching belief in its own skill in attracting tourists, after all, it’s the world’s second-most visited country. No, hold on, fourth.
Let’s say that there are two sorts of tourists. Those on a short holiday to the beach, here in Spain (because it was cheap… or because the neighbours came last year and liked it… or because of the sun and the beach and the… no. I’m kidding: it’s because it was cheap), and those who are here for a longer period, perhaps with their own car, who perhaps even live here.
The first group are here for a brief time, to have fun. They may be customers of a tour-operator, flown and bussed in to some hotel in some – and who cares which – resort and they will be glad to be away from their desks, or their machines, or their shovels. Their contact with ‘gastronomy’ (as the Spanish like to call it when using what they fondly imagine is English) is no more than the odd meal outside their hotel and a non-fatal exposure to the catering service within.
If those visitors wanted ‘culture’, they wouldn’t be staying on the coast of some random tourist region: they’d have flown to Granada, or Seville, or Cordoba, or Madrid or Valencia. Barcelona even; but not, I think, the region of the Comarca of Andarax. ‘Two weeks on the beach, with paella, beer, girls and… Oh… within striking distance of the Comarca of Andarax’, said Mr Jones to the nice lady at the desk…
The main village in the Andarax is the agreeably pleasant mouthful of Canjáyar. The Junta de Andalucía, of course, won’t let anyone build in this village of 1500 inhabitants (falling every decade since 1901) so attracting full-year ‘residential tourism’ is out. In short, it’s down to the trippers. However, I really don’t think that it will be easy to tear away the visitors to our fine hotels along the playa to persuade them to come along and visit or even to buy its local wine or olive oil.
Perhaps the national tourist industry will be intrigued. They come from the cities for long weekends, and have a whole month off in August. Maybe they would want to drive up to the hills of the lower Almerian Alpujarra to have a warm day’s visit (up to 45ºC in the summer) and a bowl or two of lamb and chips with some local wine (they bottle a good one in Laujár, another pretty village in the area - see photo above).
I am sure that the initiative to attract tourism, and therefore money to the Comarca of Andarax is a good one. The ‘turismo rural’ hostals in the hills up there will be full. Tens of people will be visiting during the summer months.
Meanwhile, along the coasts of Spain, tens of millions of visitors will be slowly turning pink under the omnipresent sun. The buses will be turning on their diesel engines and the hotels will be unpacking their frozen dinners.
Another day, another dollar.
Posted by Lenox at 8:11 PM 1 comment:

Spain is not doing well. Unemployment is up at astronomic levels – certainly beyond those that sparked the great depression in the early thirties in America. Our own numbers are carefully massaged anyway, with those who have never worked, plus those who have given up trying to find a job, no longer being added to the dismal pile. The answers to this situation, besides creating futile ‘public’ jobs here (we have more ‘funcionarios’ than manufacturing workers in Spain), is to continue to pay fourteen or even fifteen months wages per year and to make it as hard as possible to fire anyone (and therefore chancy to hire anyone). The unions defend the workers all right – but only those in work. A new plan by the Government to extend the number of years of work before an 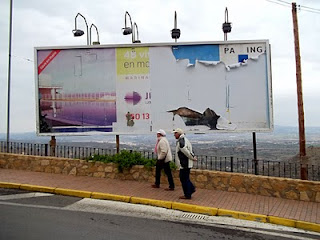 y reasonable pension kicks in is met by this comment in El País: ‘how can I collect all these years of employment to be able to deserve a pension… when I can’t find a job?’
We now hear that Germany – whose economy is now in positive territory - is offering jobs to Spanish university leavers. Well, those kids can’t find them here.
I’m clearly not equipped to write about such lofty subjects as national economies, but I have noticed that the unemployment rates are lower in Northern Spain and higher in the South.
So let’s look at Andalucía.
Our government, both the one in Madrid and the one in Andalucía, has changed the way Spain does business. You could say that the country has gone from ‘macho’ to ‘manso’ (tough to weedy) in the last seven years. You can’t speed, you can’t smoke, bullfights are all but banned, drinking is controlled and frowned upon, you can’t walk your dog on the beach, you have to observe the boy/girl boy/girl rule in your political parties, the Internet has fallen under Government control, European residents cards have been abolished (meaning, of course, that we are now obliged to carry our passports and a special police form) and all public buildings must be wheelchair accessible. All very commendable for a modern industrial state, but not much use for, at least, Andalucía, whose main industry is tourism: selling the sun and the beach to foreigners.
In Andalucía (unemployment at around 30%), tourism is controlled at a level which, of course, actively discourages tourism. The experts about tourism are the hoteliers, who are in reality, merely experts about hotels. Tourism here means package-tourism, even though this year’s visitors may choose some other destination next time: cheaper, boozier or just ‘different’. Here we have a new breed of controllers (and their bean-counters), and the old ways have gone. The regional government has, for example, taken over the control of our beach-bars. Now these bars, essentially a shed erected on the sand that sells cold beer and spitted sardines done on a fire, must be policed to within an inch of their life, with permanent installations, yet be dismountable come mid-October. Outside of Mojácar, which somehow continues as a bohemian resort (although not for much longer), we bring our sandy customers to places made of stainless steel, with conformity in design and waiters in white shirts and black bowties. San Tropez prices, too.
Jacinto Alarcón, the old mayor of Mojácar who pretty much invented the place, long before anyone in the province had thought of tourism (which might be defined as ‘bringing in money from outside, in exchange for goods which stay here’), had an idea. He wasn’t particularly interested in the summer visitors, which stimulate the local economies just as long as they are around, as much as he was in earning all-year-round income for his community. Money flowing in from abroad in a steady stream of wealth. He came up with a slogan for Mojácar ‘Veranee aquí el invierno’, which inelegantly translated means: ‘Summer your Winter Here’, or perhaps even a play on words – ‘Summer staying All Year’.
Today, half a century afterwards, Mojácar in the winter remains distressingly quiet. We haven’t been able to promote our winter sun. The summer one, after all, takes pretty good care of itself.
But let’s remember those killjoys in the Andalucía Government, who not only encourage alcohol controls outside the bars and restaurants, and smoking inspections inside them – thus rather destroying our reputation for a pleasant holiday destination – but who are concerned about poisoning the year-round settlements for retired people (who spend vast gouts of money in exchange for some peace and quiet) by threatening them with demolitions, and obliging them to live with hosepipes and noisy diesel generators.
The European youth, at least, the educated ones, are heading north for jobs. Europe’s seniors, who could bring in wealth and create employment here in the South, are being put off by blind politics.
Unfortunately, jumping off the ledge on a ground-floor window doesn’t solve anything.
Posted by Lenox at 8:22 AM No comments: