Now That's What I Call Closed

The banks here are merging, fusing, joining up, buying each other out and, in general, the number of different 'entities' is going down from 45 cajas de ahorro (savings banks) and a dozen banks just a decade ago to roughly, with the ink from the latest mergers still wet, just four or five today.

They don't treat you well, either, these new banks. They are looking for the huge deals, not the pensioner with his fifty euros withdrawal. Since there is so little choice, they can charge you even for taking money out of your (non-interest-paying) current account. You probably won't even get to talk to the cashier, because there isn't one any more. In the last decade, over 110,000 jobs have been lost in the banking sector. Well, 'lost' as in 'fired'. The banks are keener than ever on the bottom line, and it don't read 'customer service'.

Dwelling on this and other changes in our lives, I went for my morning constitutional this morning down towards the local pueblo, an ugly town of 9,000 inhabitants which, while on the coast, has no hotels, no souvenir shops, no discotheques, no foreign urbanisations with their charity shops and Burns Night and, best of all, no tourists. There's a narrow high street with no room for parking yet a fulsome number of cars contrarily double-parked with their flashers going and the consequent lack of fluid movement, a couple of Moorish butchers, a few empty shop-fronts and a number of cafés that open at five or six in the morning and then close for lunch. This seems to be such an extended meal here that they won't open again until the following day.

My walk took about half an hour, first through the campo and its interesting collection of broken beer-bottles and then down into the pueblo itself. I was desirous of making a small withdrawal from my bank - one of those that's still going -  and was wondering if there would be time for a coffee before my preferred bar closed for the day. Despite wearing a mask and emitting a gentle wheeze, I was feeling quite refreshed. 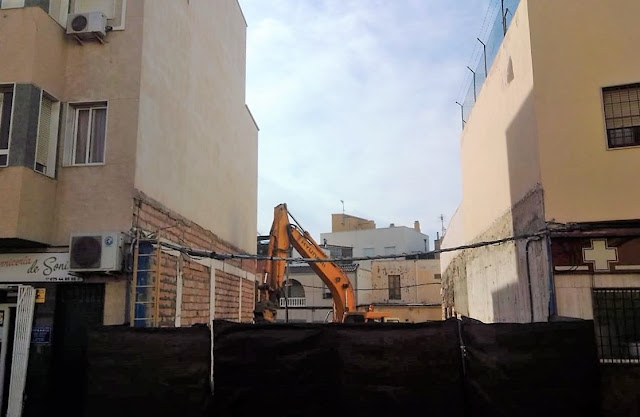 As the picture shows, the bank - she ain't no more Mister. As the Spanish say, that place is not just closed, it's desaparecido.
Posted by Lenox at 6:59 PM No comments:

Never far from the news are the endless new rules, suggestions, fines and misery designed to either make driving less of a pleasure, or more of a bother.

The latest idea to cheer up the long-suffering motorist, this time from the chief prosecutor from Salamanca Juan José Pereña, who in our opinion needs to take a long vacation, is to oblige drivers over the age of seventy to display a large ‘M’ (for mature) in the back window of their vehicle.

Fifty years ago, they would have had an equally large ‘L’ sticky-taped to the same window. Now my stepson, recently ascended to the ranks of Spanish road-users, obliges the entire family to circulate in our elderly roadster with the ‘L’ prominently displayed and, while the sign will be removed long before we must place an ‘M’ in its place (in our case, in a couple of years), it seems a small progression in half a century for the average motorist: the modest climb from ‘L’ to ‘M’. 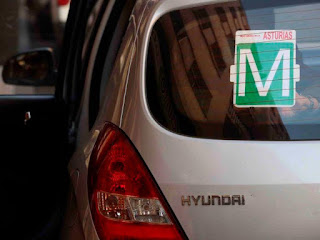 Perhaps other segments of society should also be invited to drive with a scarlet letter to warn other motorists of their presence. A ‘B’ for borracho might be useful, or a ‘G’ for an imported British car with the steering wheel on the right (G here is short for guiri).

In general, the man to watch is the traffic czar Pere Navarro from the DGT who has brought us many interesting rules over the years. He is an expert in traffic safety and is generally followed slavishly by legislators. It was he who came up with the orange psychedelic pyjama-top to be worn by irritated drivers standing on the side of the road next to their broken-down car, or otherwise kept in the boot along with the safety triangles (or in some cases – the law is generous on this point – tastefully draped over the back of the front seats in the cheaper models).  Pere Navarro it was who threatens us with four points if we take a call on the phone while driving (it’s all right for him, he’s got a chauffeur). Pere too, who now wants the alcohol driving-limit to be lowered (again!) – as if Spanish livers these days simply aren’t what they used to be.

One night back in the late sixties, my father was humming a tune while crossing the square to get to his vehicle for the drive home. Seeing the Guardia loitering, he mentally pulled up his trousers and slid into the seat of his unlocked car.

He wound down the window and called the two agents over. ‘Someone’s stolen the steering wheel’, he said.

‘That’s because you are sitting in the back’, returned the taller one, who knew him well.

My father, with as much aplomb as he could, climbed out of the back seat and edged past the two cops into the front.

Times change, there are more cars on the road, and we shouldn’t drive drunk. But if we are going to drive, then let us get on with it. The problems don’t come from old coots driving along at a low speed peering blackly through the windscreen, simply because they don’t. Mature drivers drive well, and are careful. They’ve had fifty years of experience.

As to this suggestion of an ‘M’ in the window, the Minister of the Interior, a sensible fellow called Fernando Grande-Marlaska, quickly said ‘forget it’.