A Short Visit to Oporto

After a few days in Aveiro, a large town on the Portuguese coast somewhere north of Lisbon, we decided to take the train up to Oporto to see the sights, to buy a bottle of vintage port and to meet with a fellow blogger called Colin (for a take on the daily news and opinion about Spain, see Colin Davies here).
We took the train.
The station in Aveiro is manned by a delightful collection of people who speak absolutely nothing except the local patois, and while I managed to explain that we wanted to daily returns no stoppee, it was a lottery as to whether I had got it right - especially since the whole cost for both of us was 12 euros all in, one hour each way including a number of brief stops in small country stations.
Through the window, we finally saw the beach. Aveiro is nominally on the coast - it's a town with canals - but the beaches are several kilometres off, behind dunes and scrub. At last the ocean - apparently cold and inhospitable - was in view. Perhaps another time.
The main charm for me from our mobile viewpoint was the giant bird-nests that seem to decorate the top of every beautiful and noble man-made construction in the western half of the Iberian peninsular. The more sublime the edifice, the more likelihood of a giant mess of twigs and a very self-satisfied crane crowning the building, to the irritation of the owners and the evident delight of the birds themselves.
Another pleasure is the greenery; after living far too long in the scrub of Northern Almeria, to find that everything in the countryside is green - when, of course, not on fire or scorched (there's a chunk of Portugal on fire this afternoon)  - is calming and faintly nostalgic.
The train was full, it stops in all the small villages en route and its timetable means it calls by every hour. Compare this with our own noble and idiotic plan to build an AVE through Almería and on to Murcia - a train which will be empty, hurtle by without stopping twice a day, and cost the taxpayer a fortune.
Still, who is gonna boast about a local train service? 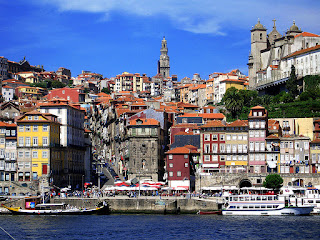 Oporto - the Portuguese call it Porto - made me feel like a hick. Aveiro is a large town with lots of three-storey buildings - pretty ones mostly, although the modern 'architects' are beginning to make their move - but Oporto is a proper city with the most beautiful tenements, churches, plazas, bridges and noble buildings - many of them dwarfing the pedestrians below.
We met Colin, who had taken a train down from Pontevedra in Galicia, where he lives, and went for lunch.
Colin, remarking on the changes in Oporto - apparently twenty years ago, much of it was in disrepair, and certain areas were dangerous (or jolly, depending on your approach to 'night-life') - told me that tourism had done much to save Oporto, but, as it does, it would ultimately ruin it (see Mojácar for an example of this truism).
After lunch, taken in a small place that Colin knows - a place where we all tried to make ourselves understood, including the grinning owner, but where every plate was not only an unexpected delight, but was also, well, unexpected. But then again - we travel, do we not,  to enjoy small surprises, good sights and better company.
The pictures are on the camera roll, but here's one of the place which sells port. 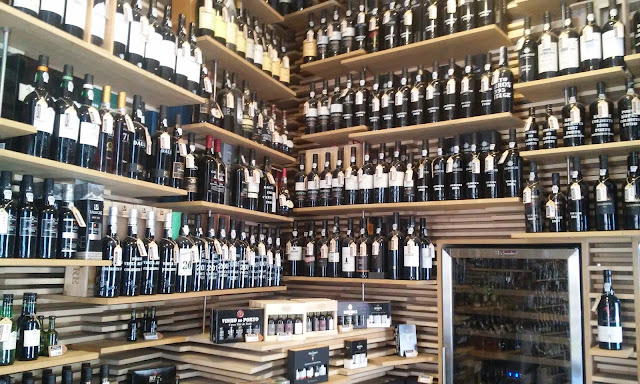 
With monoculture – the practice of planting a single, extended crop – comes a higher profit, but at the same more risk. The gigantic and extended olive tree population of Spain could become the next cash-crop to be in danger. As Iberia Nature says, ‘...Spain is by some way the country with the highest number of olive trees (more than 300 million), in the world and is nowadays the world's leading olive and olive oil producer and exporter. Of the 2.1 million hectares (5.19 million acres) of olive groves, 92% are dedicated to olive oil production...’. Now, according to El Periódico, a destructive bacteria, known disturbingly as ‘the Ebola of the Olive Tree’, has been found in a Valencia plantation in Guadalest, Alicante. The bacterium spreads rapidly and dries out the trees by inhibiting the passage of the sap. The ecologists are working hard to contain the outbreak of xylella fastidiosa, while being aware that the olive oil business in Spain is worth at least 1,886 million euros annually.
Worse still, the plague doesn’t only attack the olive trees; it also will dry out citrus trees, plum, peach, almonds and grape-vines.
Posted by Lenox at 12:23 PM 1 comment: