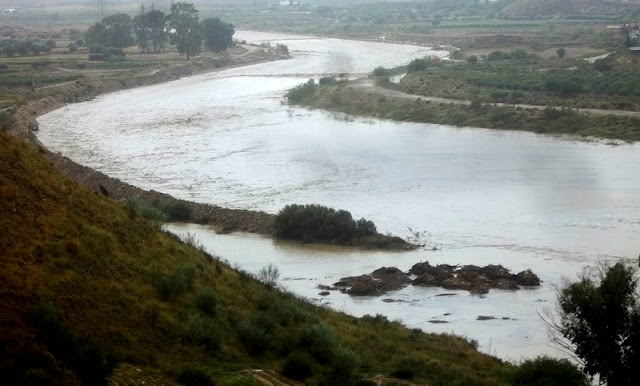 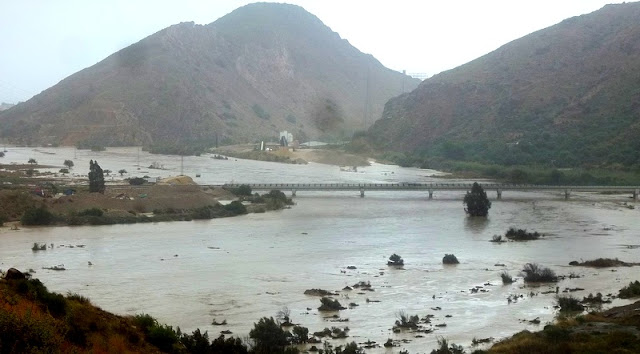 The Río de Aguas today, living up to its name for once. In fact, the rain has been so heavy in the hills above Mojácar, the river is in flood and...look! Its good kayaking weather! 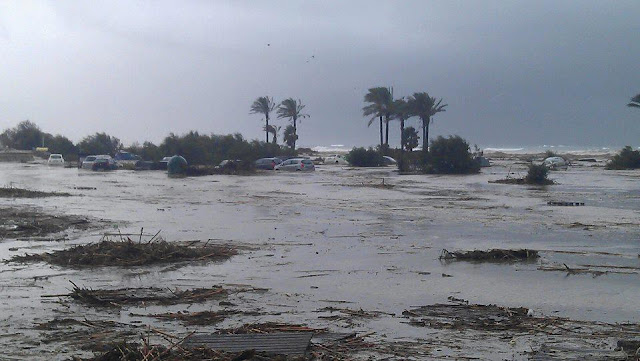 The bottom photo was sent by a friend who lives in Pueblo Laguna, a place that always gets it when it rains. See all the cars! In fact, back along the coast to Mojácar, the beach is covered with so much driftwood and mess from the riverbed that any chance of cleaning it will take some major work. When it rains it pours. 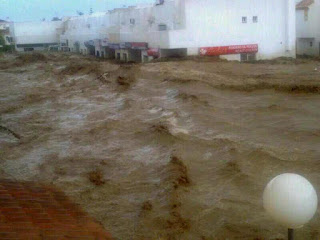 The last picture, taken with a phone, is downtown Pueblo Laguna, where the houses are currently 'very cheap'.
Posted by Lenox at 1:12 PM No comments:

A Small Plague in the Garden

There used to be a nice Canadian show on the television about the delightful critters that live quietly in the garden. A slow and friendly voice helped us as we wandered around a giant Canadian garden looking under leaves and behind rocks. Pleasant-looking bees worked feverishly to please the cameraman as the plant-life went through its various routines: flowers, seeds and pods. Small rodents galloped aimlessly about in the undergrowth as some muted music accompanied the friendly talk. Oh! to live near a Canadian garden and to follow the dragon-flies.
Here in Mojácar, we use a Californian gardening book. It has most of our flowers and shrubs, but it is understandably light on the subject of the local fauna that flitter from bush to bush, or in the case of our latest guests, from root to root. 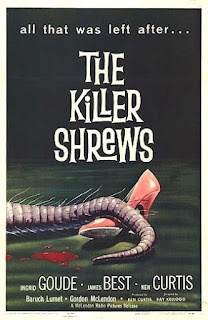 These are the shrews. They dig tunnels through the brick-hard dirt which features as the garden-bed in our establishment, tossing up occasional piles of earth and moving in a direct and uncompromising way towards the new hedgling I've put in (a small but one-day mighty hedge to remove the view currently offered to us by our neighbour). These shrews: topillos or musarañas, (nobody seems to know) have only been around since the Mojácar fire of three summers past. They feast on rootlets: fresh, juicy, crisp, tasty rootlets. I may not have a green finger, or is it a thumb, but even I know these fellows need to go.
To the shop on the beach, which offers me rat poison (now, that can't be right), and so on to the Ramblizo in Antas. Readers may know this store, which has everything for hunters, riders, pet-owners, prospective pet-owners, gardeners and I haven't even made it to the upstairs yet, where there are kitchen goods, televisions, fly-traps and screwdrivers. It's a sort of Farmers' Dream (with a little Something for the Housewife). Anyhow, they gave me a Jumbo-sized box of what turned out to be rat poison again. Stick a bit down the tunnel and stand back. Hmmn.
My father was known in Norfolk by his neighbours as The Eichmann of Moles. When a molehill appeared on the lawn (it was a fifty acre lawn and, as I remember, it needed a lot of mowing), my dad would stick a metal trap down the centre of the mound, with appalling results. But there were other equally grisly ways of dispatching a mole. It appears that moles are hemophiliacs and therefore, a bit of broken glass on the floor of their run will cause them to bleed to death. There are gases which can be pumped down their highways, and a horizontally placed British milk-bottle will allow them in, don't you see, but not out.
So this afternoon, I was watering and fending off the mosquitoes (I don't think they will be spraying for these pests, since the tourists aren't here and us: we've already voted). But then, I found my latest plant, filched only last week from a public seed-bed, was surrounded by a pile of earth. In went a small stub of rat-poison. Take that, you little swine.

There's an old bath up at the stables that does for a drinking basin for the horses. It started out as an old, empty and rusted out tub with the plug 'ole missing, but a trip to the ferretería on the beach soon fixed that. For a couple of euros, half an hour's work and a skinned knuckle, plus some cementing and a bit more work, the old bath had became a handy trough. Another trip down to the ferret to get a longer piece of hose (it was either that or move the bath somewhere nearer the tap) and all was well. The bath filled up, didn't leak, and the horses got their drink.
As it happens, one of the nags is a playful brute and one day, it pulled the plug out of the bath and emptied it. This means, apart from the mess, that there is no water until someone comes by and fixes the problem. It turned out to be me and, casting about for the bung, I found a half chewed bit of hard rubber tossed under some straw, chewed and perforated too.
Back to the hardware store. Can I have another plug... this size please. The plug was flattened and hard to measure. Take a 48 and a 54 said the lady, one of them will fit.
As it happened, neither did. One was too big, the other too small. The smaller one is now in our bathroom at home, having taken over from an old and manky bung we've had for thirty years. The new one, with a shiny metal back to it, has rusted already.
So, back to the shop. Look señora, you sold me the unit, so you must have a plug that fits. No comprendo, she answered. When in doubt with angry foreigners.
So, to another shop. This one is the ferretería from Hell. It's a giant and wildly overstocked place where shoppers get lost. You can sometimes hear their pathetic shrieks late at night as you drive quickly past. The quality of the merchandise is highly suspect, boxes with bits missing, old stuff made in countries that no longer exist, wooden hammers that break on the first whack... and I don't like going there without a piece of string and a guide-book.
Their plugs are down in the eighth aisle, turn left, second aisle, right and right again. I eventually discover, a little later that morning, that they don't have anything except 48s and 54s either.
I went back to the first shop. Sell me another unit please, I said, with a spare plug.
We've run out of units, she answered with a certain satisfaction, I think you bought the last one.
So, to the next door town of Turre and its ferretería.
The story about the horse, tee hee, and could I buy a unit with a spare bung, por favor.
Yes I could.

A Spoonful of Sugar


The government of Mariano Rajoy is hoping to have been seen to be quick and eager to reassure Brussels that Spain may be wounded and in pain, but that the cure is already underway.
The ordinary rate of IVA has gone up to 21% (following a rise last year by the PSOE of 16% to 18%), school-books have gone up in price with a massive tax increase (just in time for the school year), higher prices on public utilities have been allowed (including the electric company, Endesa, making its prices the highest in Europe) and even the poor funcionarios, Spain’s three million strong public servants, have had to wave goodbye to their Christmas bonus. The Minister of Justice is tightening the abortion rules to strict church limits and many file-sharing sites (video pirates if you prefer) are being closed down. Around 160 bank-sponsored evictions are being carried out each day.  The poor have not been forgotten, with the special 400 euros handout introduced by the socialists being returned for a further six months, although under strict new conditions.
A recent survey asked if Rajoy should spend more attention on solving the unemployment crisis – also the highest in Europe, with some provinces standing (or rather ‘sitting down’) at 35% - and less on trying to fix the prime rate and appease the bankers in Brussels.
Perhaps, indeed, with all the vinegar, Rajoy should be considering a small bonus to his subjects, a sop to the masses, a bit of good news to treasure during this dark autumn and winter to come.
There was a hint of raising the speed limit on the motorways – but instead, they lowered it on the byways, increased the police presence everywhere and, in a move designed to send the tourist market reeling, the new head of Tráfico has recently said that she wants to see ‘zero alcohol’ on the highway code as soon as possible.
So far, the best the PP thinkers have come up with has been a putsch on the public television and radio of any newscasters and interviewers thought to be meddlesome. The good news is - they’ve put bullfighting back on.
Some opposition politicians and intellectuals are talking of insurrection (as far as they can – a new law has been passed making encouragement to violent protest, even on Facebook, a crime punishable by two years).
The answer to this, according to Cayo Lara, the General Secretary of the Izquierda Unida (the Far Left alliance) could be to imprison a banker. ‘Spain’, he says, ‘needs to have the image of a banker behind bars’ he told Europe Press, adding that ‘the banking fraternity doesn’t need to walk on a bed of roses and that those responsible for ruining many thousands of people and contributing to a blood-bath of public resources should be held to account’.
The Government however refuses to hold an enquiry in Parliament on the origins of the current crisis and, apparently and despite alarming accounts of massive public fraud, no banker appears to be at risk of losing their liberty.
On September 25th, a protest called ‘Occupy the Parliament’ will be held in Madrid. It will be a test of how far the public is prepared to show their impatience with the current crisis.