I had been carrying the neon tube in my car for a few days, ready to try out a small experiment. It was a bit too long so I had a bit of it sticking out of the window on the passenger side. Apparently, there’s no specific law against this as long as you fasten a red strip of material to the end. I used an old tanga which I had found in the spare room.
Somewhere, I’d read that if you hold a neon tube firmly at both ends and stand under a 264 million gigawatt electric pylon, like the ones Sevillana are putting up in people’s back yards, the light will pick up the ambient electrical radiation and actually glow.
It would make a bloody good photo, I reasoned, the unfortunate veterinarian lady from the riverbed stood on her roof under the stretch of the giant cables that Sevillana had thoughtfully draped over her home. To say nothing of the massive pylon they had erected just outside her bedroom window. She would stand there like a modern Indalo, her legs slightly apart, her chin raised defiantly. As the vet glowed, just after sunset, I would be ready to take a quite sensational picture.
On the way down from the sierras where I had been ‘on assignment’, the road passes a restaurant outside Turre which is a rather large and modern affair – Madrid money apparently – which sits defiantly under another enormous electric highway once again erected by the omnipresent Sevillana, a disagreeable monopoly whose only interest and loyalty – as proved over the past few months – is to its shareholders. Curiously, the joint, which is large, smart and apparently spreading gently out from the original farmhouse, has no electrical hook-up and has to rely on a generator.
The lines crossing above the locale actually hum and your hair writhes slightly as it debates whether to stand on end under the cables.
A perfect place for my experiment.
I stopped the car outside the door and climbed out with my rod, looking something like a manic Luke Skywalker. Right there, outside the front door, I spread my legs slightly, grabbed hold of both ends of the neon tube and, with a short prayer to the god of idiots, waited to be bathed in light.
Well, nothing happened, actually, and after wishing a good evening to the three or four slightly startled looking waiters together with the cook who had come outside to join me, I put the rod back in the car, fastened the knickers firmly on one end, and quietly drove home.
The cables above the vet’s place, I noticed this morning, are now in full working mode. You can see the air bubble as it touches them. Perhaps the earlier experiment hadn’t worked because the power wasn’t strong enough. These new pylons appear to hold an even heavier charge. I think I might try my neon tube experiment again tonight.
Posted by Lenox at 7:21 PM 3 comments: 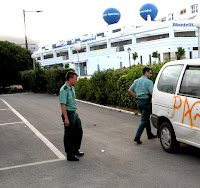 One of the party leaders in the Mojácar race to the town hall found time on Saturday to spray Angel Medina's car. The artwork was admired by the Guardia Civil and, indeed, a whole host of people after the security camera footage from the El Puntazo hotel was examined.
Silly! You're meant to do it at night!!
Let's hope the Luddites' party purse is spent on better things than spray paint.
Posted by Lenox at 8:27 AM No comments:

How To Vote in Spain

There’s a certain amount of people (I almost wrote ‘a lot’) who don’t want to vote in these local elections on May 27th - and probably some who would like to vote, but for none of the parties available.

However, there is an increasingly large number who do intend to vote and this is directed to them.

In you vote for a candidacy, a list of names which make up the local party proposal. The names, listed on the ‘papeleta’ which forms your vote, are, in order of prominence, the proposed candidates for the town hall.

This is an easy, simple and generally democratic way of voting and putting into office the people you trust.

But, as in everything, there are a few catches.

The list of names for the party you vote for is the names, in order, of the candidates from that party. The first hundred or two or five hundred votes – depending on the size of the town and its electorate – will go to the first name on the list, ensuring his place as a concejal. The next number of votes gets the second name in and so on. If you are voting for a particular candidate – a friend of yours or a ‘likely looking chap’ or perhaps even the Party’s ‘token Englishman’, then you had better hope that his name is at the top of the list, because that’s where your vote is going.

Some parties hand out little gifts, lighters or pens or a glass of wine. They may well hand out copies of their papeleta perhaps with the special voting envelope. That’s fine, but don’t be taken in by those few ‘bad-pennies’ who hand out bigger presents. Nothing is free in politics and it is said by the Spanish that only corrupt people vote for corrupt parties and the trick is to make sure that there are more honest voters than corrupt ones.

You can vote by going to the Correos. If you have your vote ready and sealed in the special envelope, then, with your photographic ID, you can vote. Otherwise, slightly more complicated, you can ask to vote by Correos at the post office, receive all of the different papeletas by registered post and return to any post office with your vote (however, only in Spain) before May 23rd.

Most people, however, like to go to the polling station.

The voting process is simple. You go to the polling station (usually the school – in Mojácar it’s the village school up by the old football field at the back of Mojácar pueblo – you can drive up the back road as if to the market). You take your residence card or your passport or any legal ID which shows your photograph. You check your voting table (there are people to help you). You go behind the curtain and choose one paper from the alternatives (each ‘papeleta’ or list will be in a neat pile in the voting booth). You seal your unmarked vote in an envelope and you deposit it in the ballot box.

At the end of the day, the votes are counted and the council seats are apportioned to the parties according to the numerical results.

A town, they say, gets the politicians it deserves. It must be worth everyone’s time to make sure that the best people possible will be asked to serve their community for the next four years.

Mojacar's strange rush towards the town hall continues. Soon, the high-electioneering period begins where the posters will be literally stuck to everything, wall, tree, door, truck and stone. They will all say 'Vota por so-and-so' and will have some clever slogan under the candidate's grinning phizzog. 'This Time it's Us' or ''For a New Beginning' or 'Please Leave your Money under the Table'.
No doubt crookedly inclined voters will vote for crookedly inclined parties.
There are other concerns.
Of the 'European' vote, one party has no less than twelve 'foreign' names on their list - almost all Brits. However - none of them speak Spanish. How are they going to vote in the town hall meetings? How are they going to work up there at all? Yes, we need 'Europeans' in the ayuntamiento, to be able to speak English to the public, but they will need to speak Spanish as well to be of any use.
I don't think in a modern Spanish town with half the population being British a 'no comprendo' is going to be of much use in the town hall.
Posted by Lenox at 1:04 PM No comments:

There seems to be a lot of fuss about the transfugas - those politicians which change parties (usually causing the government to fall as there's not much point in doing it just for a laugh). Whether they do it for personal consideration or not I can leave to the Reader's judgement.
The correct thing to do if you find yourself in disagreement with your party is to resign and allow the next name on the party list to take over your position. After all, the fact that you are in the town hall as a councillor is because people voted for your proposals...
Of course, with the exception of Angel Medina, no one has left their post to 'go home' in living memory, and the entire province is full of 'transfugas' and betrayals as a result.
In Mojácar, of the seven transfugas currently in the town hall, six of them are on various party lists for this month's elections, and lead no less than three of them (PP, PDM and Levante Sostenible).
The PDM (Partido Democrático de Mojácar) in fact, is a good chunk of the current town hall under a new flag. The first three names on it being Gabriel Flores, Maria Asención Morales (both chucked from the PSOE) and, in third place, Jose Luis Cano (chucked from the PP). I can't see this group getting enough votes to put Maria Asención back into power - much less Jose Luis Cano! Or am I guilty of wishful thinking?
So - who is going to vote for a transfuga?
What is he expecting to get out of it?
A promise?

Later: I read (El Mundo 5 May 07) that the PDM has got its own Brit on the list (at number eleven!). Keith Bradley who had time the other day to offer this quote: '...(in the last twenty years) I had never seen a government as efficient as the one led by Gabriel Flores during the past two years'.
Posted by Lenox at 10:45 AM 1 comment: