Somebody sent me a cutting from The Spectator. It’s a picture of a woman looking at her calendar, which is clearly labelled August, and saying – ‘Oh, Daaaling, only a hundred and twenty shopping days left before Christmas’.
Bloody season on us already.
I thought I’d get this piece over with a bit earlier this year and concentrate on the one good thing that Santa brings. Namely - fantasy. It’ll just cost you twenty euros to buy a slice of magic and, the sooner you buy one, the longer you’ll enjoy it. You see – it burns out on Lottery Day, which in this case is December 22nd.
It’s the ‘decimo de navidad’, the Christmas lottery.
I win giant sums on the lottery every week, according to the various e-mails that come my way via Nigeria. Sadly, they are all scams. There is no such thing as a huge prize on offer when you never bought a ticket. But here, the ‘decimo’, in fact a tenth of a lottery sheet, which cost you those few bob, will keep you in fantasy, in lalaland, from now until the draw. For the shrapnel in your pocket, you could have three hundred thou in your hot and sweaty for Christmas. In fact, the moment you buy that ticket, you already do have the money, at least until you hear different, you just can’t spend it yet. But you can dream.
A friend says that you have more chance of being hit on the head by a fellow who forgot to pull his rip-cord than winning the Big One. Quite an image, but he’s quite wrong. I’ve already won!
Anticipation is half of the pleasure, although it’s true that I would prefer the gut-wrenching excitement of seeing my lottery ticket on the front page of the daily newspaper. With me attached to it in a proprietary sort of way. Still, I’m having lots of fun these days mentally ordering my new car, my new apartment in Marbella (they are surprisingly cheap at the moment), my crate of old and fine wines and a well deserved holiday for two in Australia.
If there’s anything left after that, perhaps a butler, a Cesna and a yacht might help soak up the remainder.
For some reason, the Lotería de Navidad is known by the English as ‘El Gordo’ when this is just the slang name for the main prize, available from any of the national lotteries that come out, more or less, twice weekly, plus indeed any other huge chance pay-out. There are so many different ways of winning a fortune – or betting one – with the football pools (las quinielas), the daily ONCE blind association’s draw, the ‘primitiva’, the lottos and so on.
Then there is the fascination for the one-armed bandit, whose merrily twinkling lights are always working to intrigue you into slipping the damn thing a euro or two while you are trying to sink a quick nip after a long day at the office. There is even an association to help ludopaths (as they are apparently called – those crazed gamblers who haven’t figured out that the House always wins). It claims that there are a million sufferers in Spain and attempts to wean them off the dice, the cards and games of chance. I bet you know one.
So, it’s risky business buying a lottery ticket and entering into the world of chance, although I feel oddly confident. As the fantasy-writer Terry Pratchett explained once, ‘a million to one in my book is practically a certainty’.
While Homer Simpson would (indubitably) say: ‘A million to one – I like them odds’.
Posted by Lenox at 9:42 AM 1 comment: 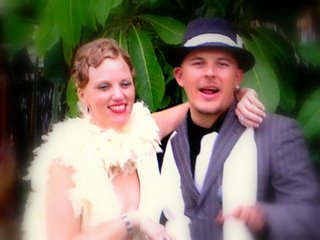 Jessica and Oscar tied the knot yesterday in great style as the leaders of two gangster clans. Around two hundred people took part in the event, which started with aboat trip, with no cement over-shoes, out of Garrucha and along the coast. Steve from The Universal Life Church performed the simple ceremony. A large dinner and dance was held at the Hotel Mexico later on in the evening. Our congratulations and best wishes.
Posted by Lenox at 12:11 PM No comments:

The Snails of Palomares

A USAF B52 was taking on fuel from a flying tanker somewhere over Vera on January 21st 1966 when something went wrong – the two aircraft touched, and exploded. Debris rained down on the fields and coastline below, including four unarmed nuclear bombs.
I mean, ‘four bombs which hadn’t been armed’, rather than ‘four defenceless bombs’. That would have been cruel.
The gerfuffle as the remains of the aircraft, blobs of raw plutonium and the four bombs were re-secured by the Americans are well known. Two bombs landed on the ground in Palomares (‘falling open and melting everything in their path’ according to unverifiable reports) and the other two fell in the sea, where one was soon found while the forth was finally located in a deep trench off the coast several months later by Alvin, that cute little mini-sub that starred in National Geographic magazines of the period. Antonio the wise old fisherman with the 150-metre ice-blue stare suggesting fully-fledged insanity may have helped. He was certainly cheaper to fuel.
Franco was on board the Fifth Fleet American destroyer for a brief visit and toying with a complimentary Easter bunny as the bomb was fortuitously hauled aboard.
A suggestion from the time was that the last bomb was in a very deep hole in the sea and was impossible to extract, so a plastic reproduction had been lowered off the other side of the ship to be triumphantly raised in front of the mad Caudillo to cheer him up.
Fraga Irribarne the Minister of Tourism, perhaps unaware of this sleight of hand, famously took a dip in the sea with the American ambassador at the time to show there was no radiation. On the other hand, they carefully enjoyed their frolic in front of the Mojacar Parador, some ten kilometres down the coast.
The Marines removed 800,000 tons of topsoil, fertile and safe, and took it to South Carolina, because, you see, there was no radiation.
It's now used to grow terbacca.
A small desalination plant was built in Palomares by the Americans for thirty million dollars as a kind gesture (it was quickly closed down after the resident engineer moved to Mojacar to open a beach bar and, seeing that he wasn't coming back, the Catalan caretaker sold the guts of the building for scrap). A few rusting Geiger counters were left to record the ambient radiation level – if only there was any – and new construction extending from Vera Playa into Palomares and Villaricos was given the go-ahead by forward thinking planners (I could have written ‘greedy capitalists’).
A recent test on Palomares snails (please pay attention here if you count gastropods in your carefully balanced diet) has shown a higher than normal level of radiation. That luminous slime they leave as they melt their way over the rocks is, apparently, smokin’.
The American Department of Energy, together with the CIEMAT Spanish atomic agency, has now bought ten hectares of land which had been previously cleared by speculators ready for some building, although the dust already raised and blown to the heavens by the tractors and… no, I’m not going there.
The public consortium will now clean this piece of land over the next two years.
Local ecologists have reacted to the news by saying that a much larger area needs to be sanitised.
The half-life of plutonium is a lot longer than ours.
For the meantime, don’t eat the snails.
Posted by Lenox at 11:35 AM No comments:

Let's see:
Nine parties stood in 2003 in the local Mojacar elections.
About 2,500 people voted.
Six parties got enough votes to obtain councillors.
The biggest party was the conservative PP. It got four councillors.
The usual alternative to the PP is the socialist PSOE. It got two councillors.
The other four parties - one left, two right and one nationalist - all shrimpy groups with two or less councillors, between them raised a quorum with seven votes. The mayor was Carlos from the Hard Left (AiZ).
Two years later, there was a motion of censure against Carlos with one guy from the nationalist party (PA) crossing the floor and joining an unlikely coalition of the PP and PSOE. The new mayor was Gabriel, from the PSOE (with its two councillors).
An agreement was apparently reached between the two plotters, Gabriel (PSOE) would be mayor for a year and Rosmari (PP) would become mayoress for the final year. No one had seen this document.
A year passed.
A few more months passed.
Gabriel eventually agreed that he would pass the staff to his partner on October 2nd and when the day arrived, he announced, to no one's great surprise, that he had changed his mind and was not going to quit his position.
The PP (under threat, apparently, from Head Office) walked.
The famous document from the motion of censure surfaced today. In it, the two socialist councillors and Rosmari (from the PP) agree to divy up the town hall between them.
As the four members of the PP walk out of the town hall (and their monthly wage), one falters for a moment... and goes back inside.

So - a lame duck government until the next crisis - or until the next local elections of late May 2007. Don't miss them, now!
Posted by Lenox at 9:34 PM 2 comments: