One was always inclined to believe everything that appeared in the newspapers - as why would they lie or fabricate items? Perhaps during wars, the reports are manipulated a bit to encourage the populace to fresh efforts, but we are in Peacetime now. However, with falling revenue, corporate ownership, increased costs and the arrival of cyber-news, things are changing. In the UK, some newspapers have been guilty of such aggressive hyperbole in the search for reader approval that they are risking losing advertisers.  Here, we have Leapy Lee (ancient review here). In the US, there’s a newspaper that apparently buys ‘exclusive’ stories... and then sits on them. For truly wacky news, there’s always Rapture Ready, which prepares us for the Second Coming of Christ with appropriate news-items. 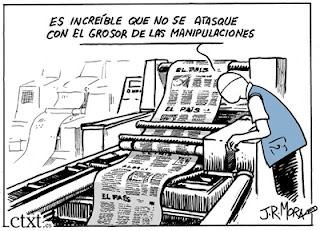 In Spain, the Media is broadly owned (and controlled) by four major corporations: ‘...with regard to the independence of the media, ... there are "frequent reports on the pro-government manipulation" of public media, especially since 2012, when the Spanish government changed the way in which it appointed those responsible for public media, leaving it in practice in the hands of the executive. With regard to private media, there is also a lack of independence and autonomy...’. (La Tribuna de Cartagena). El País, created to be a centre-left newspaper, is now so beholden to its corporate owners that it prints fervently pro-conservative stories as a new standard. In contrast to this view, here’s the director of El País: ‘The operations of toxic information through social networks, known as fake news, are a threat not only to the free press, but to Democracy itself. In the face of this epidemic that has spread throughout the world, Antonio Caño claims “as more necessary than ever” quality journalism: “honest, rigorous and respectful of professional rules”...’. Amen to that.
We must face the power of the daily newspapers in Spain, which have persuaded the Government to legislate in their protection, in an attempt to get other news-sources to pay some kind of a canon to link or quote their ‘stories’(by which, we mean ‘factual news reports’): the ‘Canon-AEDE’. As if there is an ownership to occurrence. Meneame, bearded by this rule that says they must compensate the daily newspapers (even though they have boycotted them for the last few years), says it won’t pay. It could, of course, at an extreme, always move to Portugal... GoogleNews, as we know, operates in the entire world, except here in Spain.
Jeremy Corbyn, the hapless British labour leader, makes the point (following the smear attacks in The Express and elsewhere of him conversing with a Russian spy): ‘...A free press is essential to Democracy. We don’t want to close it down – we want to open it up...’.
Posted by Lenox at 5:08 AM 1 comment:

Egged on by the editors of some of the right-wing press, many Spaniards have become incensed by the article from The Sunday Times about how to become a Spaniard (be noisy and late for appointments).
Saving me the trouble of writing a tounge-in-cheek view of the Brits (George Mikes did it anyway), here's the riposte from the ABC which came out on Thursday:


Here we have, served without a drop of bitterness but instead in a purely jocular vein, a series of very diplomatic recommendations towards how to become 'un British' in a zippity doody jiffy.

First of all, you can carpet up any surface under your roof because Great Britain, the host country, can also be the promised land of all carpet-mites, whether it is the living room, the staircase or the bathroom, whether for public or private use. The advantages of carpeting the 'small room' are undeniable, as it saves a lot of time in mopping and is just the thing for stepping softly, which, in the bathroom, multiplies the comfort of the excretory moment. The hairs on the carpet will absorb whatever may fall outside the target (God forbid) without the need for the daily scrub and bleach.

Hygiene, therefore, has to be fairly relative if you want to be an Englishman, because water is a scarce commodity and its use must be rationalised. A study by Euromonitor International points out that the British are among the Europeans who enjoy the fewest weekly showers: the average being less than four. Another argument for the Brexit? Without leaving the bathroom, the UK is a country firmly anchored in tradition. This is the resistance to the universally used Continental single-lever tap system, in which one chooses the temperature at which the jet comes out. An Englishman - even in the 21st century - will have to risk scalding his hands, getting them frozen or moving them from the cold to the hot tap, which will undoubtedly improve his reflexes.

In general, if you want to be British the trick is to go against the way most other humans circulate (either on the pavement or the road), queue up for everything even if you are the only one in line, dine at an unholy hour and, if you do so away from home, go to a foreign cuisine restaurant because it will be difficult for you to find a decent bite of British cuisine (that oxymoron), unless you love local fish (unlikely choice) or your legendary rhubarb crumble, with its remarkable laxative powers.

When travelling abroad, if you want to be English, don't hesitate to slip some white socks (do not need two pairs, don't exaggerate) into the suitcase. They will be indispensable for the sandals that you will be wearing on your holiday. At your destination, and especially if you are young, be sure to dedicate at least 20 of the 24 hours of the entire day to an immoderate and joyous intake of alcohol, and when you are in  a suitably cheerful frame of mind and yet you find you can't get your point across since not everyone understands the language of Shakespeare (or rather, the Spice Girls), following a couple of street brawls, you can try the "balconing" in the hotel.

Don't waste too much time in museums, such as the Prado for example, where the British hardly account for 0.35% of their visitors (Italians are 9.71 and the French 5.30). Only one exception to this sight-seeing rule is the Museo del Jamón, where those  tasteful sandals will have brought their owners for a spot of culture. On returning to the UK, one traditionally goes straight to a law firm specialized in reporting Spanish hotels for food poisoning. You don't even have to suffer any queasiness, since the paperwork and the scam are arranged there while you wait.

And always exaggerate, exaggerate very much, even employ sensationalism if possible: another great British contribution to the world that strives to entertain one's reader or listener during those dark British months of winter.
Posted by Lenox at 1:29 PM No comments:


It is hard to move to live in another country, surrounded by strangers, with different customs (although, we all seem to enjoy the challenge and the adventure). How hard is it, though, to return to one’s own country again? Perhaps age, or family concerns, or illness, or the death of one’s lifetime companion will be the leading reason why someone must return. How do they manage, once they are back? It is said that after ten years away from your country, you have moved a decade in one direction, while your old home has moved a decade in another.
Is there any help or advice back in the UK, or Germany or Holland for the weary son who returns to the homeland? Will they ‘kill the fatted calf’? 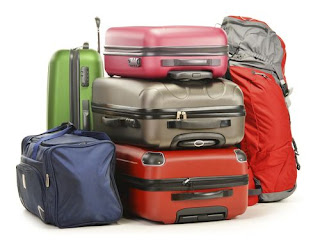 Probably not. It must indeed be very lonesome and sad to be in such a position. It is not unheard of for the ex-expatriate to ask for his ashes to be returned to Spain on his death.
Another group that must face – doubtlessly more often – the return to their country of birth is the Spanish, often studying or working abroad. They may come back to Spain, perhaps, and feel uneasy. They have adopted different customs and life-styles. They had found new companions abroad and now feel that their ‘stay-at-home’ friends no longer understand them. Codigo Nuevo has a report on this subject titled ‘Deciding to return to your country after having migrated is almost as hard as leaving’. It’s sometimes hard to leave; perhaps it is usually far harder still to return.
Posted by Lenox at 5:25 AM No comments: