The Season for Forgiveness 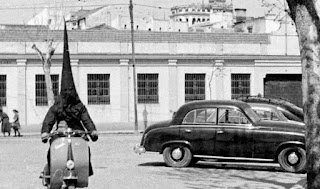 Easter is the first major festival, or holiday, of what in Spain can safely be called ‘the summer season’ (at least down here on the costa). The bars, beach bars, restaurants and nick-nack shops are all open once again, freshly painted and ready to work the cash registers.  A headline says ‘Málaga to rake in €120 million during Semana Santa as celebrations to bring 1.4 million tourists’ (here). Easter outdoes itself in these days of tourism with more of a spectacle than ever, with longer processions and larger crowds, yet with more commercialism and less faith and fervour than in earlier times. A pointed cartoon from a newspaper a few years back shows female sunbathers spread on their beach-towels at the feet of the Holy Crucifixion. Only in Spain.

Spain has moved from a Catholic country (does anyone remember when Franco was in power?) to – at just 9% of Spaniards now viewing Christianity as defining; making Spain one of the least religious nations in Europe (here). Not that things are much better elsewhere. An article here quotes a study which sums up European religion thus: ‘...if it depends on the young – as depend upon them it must – then post-Christian Europe has arrived’.
While religion is now downplayed – from the school to the street – one must still be careful not to offend religious sensibilities, and a few actors, rappers and tweeters are currently on their way to court or even jail for overlooking this important point.
Catholicism may well be on the wane among the ordinary citizens, but the Opus Dei (Wiki), a powerful and slightly eccentric group within the catholic faith, has major influence within the political system (the last Interior Minister  - and Opus member - Jorge Fernández Díaz, even awarding the Virgen María Santísima del Amor with a gold medal back in 2014). Other senior PP figures who are connected to the Opus Dei include the new Minister for the Economy Román Escolano (here), Ana Mato (ex-Minister of Health), Luis de Guindos (ex-Minister of the Economy and future Vice-president of the Central European Bank), Cristobal Montoro (Minister for Hacienda), José Manuel García Magallo (previous Foreign Minister),  the ex-Defence minister Federico Trillo, the Ex-Education Minister José Ignacio Wert and so on (here and here).
While declaring one’s taxes, one can sign a box for a minute portion to go to The Church. While not many do these days, the church seems to manage well enough, receiving 256 million euros from The State last year (here). Some suggest it does considerably better, with black money, money laundering, ticket-sales, tax relief, charity, rents and so on forming other types of regular income (here).
When it comes to marriage within The Church, an article this week from El País says that, these days, you get funny looks if you want a church wedding. Now just one in every five marriages is hallowed...
The Church has its own agenda, but the churches, cathedrals and other sacred buildings in Spain are still most worthy of both respect and repair – even if, sometimes, they are treated as little more than obligatory tourist destinations, at fifteen euros per visitor...
But at least during the Easter season – all is forgiven.
Posted by Lenox at 4:25 AM No comments:

Business over Tapas - useful news and items about Spain

We may be a lot of Brits living in Spain (despite what El País in English appears to think) but many of us have little idea about this splendid country. Some Brits remain stuck to their satellite televisions, noting that it's going to be snowing tomorrow in the UK - rather than watching the Spanish TV forecast (sunny, since you ask). After all, Sky News doesn't tell us much about what's going on here.
Some residents get their news from the English press - perhaps the rather anti-EU Express (we love this headline) or the poorly-named Sun (including stories about sex doll brothels in Spain, you're welcome). If you read them online, there's the pay-wall to consider...
There're a few local 'newspapers' as well, including our friend with 'half a million readers' (which begs the question - if you removed your advert, would your customers drop by five hundred thousand?) I wonder how many copies they actually print. Understandably, they won't say.
We know what the content is - bits wrenched from Monday's local Spanish daily, mixed judiciously with parish news, doggy news and so on, which no one reads, rushing as they must to Leaky Lee's page.

For those rare souls who are truly interested in this fascinating country, I publish Business over Tapas with what's going on in Spain. It is aimed at the European reader. What's coming, what your taxes are, when and who and where. The price of houses, the politics, the new laws and rules, news for Seniors, how Brexit will affect us, the corruption, where to visit and who to vote for. There's no advertising, because you can't report what's happening with an advertiser looking over your shoulder.
I leave the titillation, the filler, the advertorials and the write-ups to the freebies.
Not many people sign up (60€ per year for a weekly email) and I'll never be rich, but I enjoy reading the many different newspapers, blogs, news-sites and aggregators that deal with Spanish events and then producing a three to four thousand word report with between sixty and seventy useful links, sent out on Thursday mornings (rain or shine).
The BoT is also on Facebook with some stories here, and you can read the entire report, free (but without the links) on the webpage here.
But, hey, you had better subscribe! That way, you'd know what is really going on in this great country.
Posted by Lenox at 11:34 PM No comments:

A bit like Punxsutawney Phil, the ground-hog that throws a shadow, here in Mojácar we have been slowly emerging from our underground burrows to see if our drastic and fierce winter is truly over. Really, it wasn't that bad, tee-shirt weather at Christmas and so on, although we could sometimes see the snow on the mountains up past Bédar...
I've stopped lighting the fire - the only heat in my house, apart from the sunshine that pours through the windows most days. I had wood this year, after cutting down last Easter three eucalyptus trees whose roots were poisoning the garden around them, making the brussels sprouts taste funny.
My mobile phone thinks it might rain again, but it is often wrong.
I got a new phone from the Orange people. This one is a Sony Xperia. A fine tool indeed. For some reason it comes equipped with adverts.
The other day, it rang. No doubt some important communication from my stock-broker, but I couldn't get rid of the fucking advert (I'm not kidding - it was for Durex). Pressing and prodding the screen like a lunatic. By the time I got to the proper place, the phone had rung off. The biggest surprise came yesterday however, when out of the blue, DHL delivered 144 boxes of french letters to my door...
Mojácar has been in lock-down. Even the knick-knack shops have been closing early. I went up there last night for a drink, but found almost all the bars shut. In 'Sin City': the Ibiza of the Mainland. So much for the hoopla about 'the prettiest village in Spain'. I gave up after just one beer in the company of a barman who insisted on answering my Spanish with English (turned out he was from Cornwall), so drove down to next-door Turre (surely the ugliest village in Spain) which was - as always, heaving. I think that not being a tourist village (no beach, no hotels, no views) makes it concentrate more on residential tourism (as the Spanish authorities blandly refer to us foreign settlers). A good dinner in a rather full restaurant. I even saw a few people I knew. 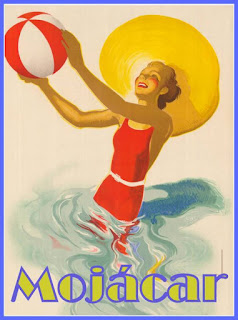 In Mojácar, we have a short and decidedly mild winter, another six months worth of low season with only the Belgian cyclists to amuse us; and in the middle, the three months of tourist hell that our Masters (the aforementioned knick-knack owners and their families) have decreed we must endure from mid-June to early September.
When it's too bloody hot anyway.
But now, it's nice. The garden is beginning to awaken, the bees are out and the birdies are tweeting, warbling or croaking according to their convictions.
Yesterday, there was the local fiesta called 'La Vieja'. A piñata of sweeties hidden inside a paper granny is taken out into a quiet spot in the countryside and gleefully beaten to pulp by the children with sticks (one can't help wonder if this is a homage to a rather sinister event occurring during the Great Starvation of the early eleventh century).
No doubt they collected all the trash - oh, and granny of course - before they left.
The next fiestas (we live in a kind of Disneyville) include the tuna (merry troubadours from Granada and beyond come to visit and are solemnly organised to death), Easter parades (Praise the Lord!), some new rockabilly weekend (huh?), and the Moors and Christians extravaganza on the June 10th weekend. I think there's  also a 'Spring Break' organised by the hotels coming up soon.
The beach awakens around now. The town hall pretty much ignores it, keeping all the fiestas firmly in the pueblo (where less than 10% of us live). Down on the coast (the player as the Brits call it), new restaurants are being prepared for our pleasure (usually obliged to pay exorbitant rents) and the painters and decorators are busy. Our single beach road is now filling with traffic that drives up and down. Up and down.
The police are polishing their breathalysers; 'have you taken any drugs in the last 48 hours?', they ask. They have a drug-sniffing dog now (called Eccles), and a drone to keep order.
See, Turre doesn't sound so bad, does it?
Posted by Lenox at 7:55 AM No comments: 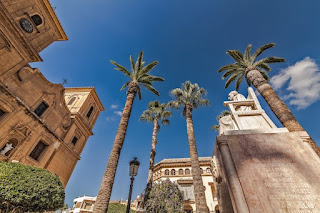 Well, look at that. It turns out that the improbably named Huercal-Overa (it's in the top end of Almería, around 45 mins from Mojácar) used to be two villages called Huercal and - unsurprisingly - Overa. They joined forces 350 years ago to become the present town where Hacienda and Social Security and the local hospital and all other good things can be found.
I always thought that Huercal-Overa was an old Irish settlement with the Oldham apostrophe unaccountably missing.
Anyway, today Saturday 3rd of March is the anniversary. Before 1668, the two villages were merely part of the large municipality of Lorca, up the road in Murcia.
Come to think of it, without this union, we would have probably had our tax office in Vera.
And the hospital.
Posted by Lenox at 9:54 AM No comments: