The Hotel, My Friends, is Legal!

The ecologists were sat round a fire, trying to open a tin of beans with a corkscrew. 'The Hotel Algarrobico is Legal', shouted one of them, holding a piece of newspaper that had blown in from a nearby building site they had successfully stopped last year. The building licence granted in 2003 for the ghastly twenty storey hotel was kosher, rules the Supreme Court. Now, of course, the builders can sue both the Andalucian Government and the environmentalists for interference, trespass, work stoppage and degrading the gigantic building. Should be a nice sum of money, says an eco-warrior uneasily to another, covered inexplicably with baked beans and nursing a bleeding thumb.
So will the promoters finish the hotel, sell it to the Swedes, or turn it into an old people's home, as suggested by the local mayor?
I know, they could give the penthouse suite to Helen and Len Prior! 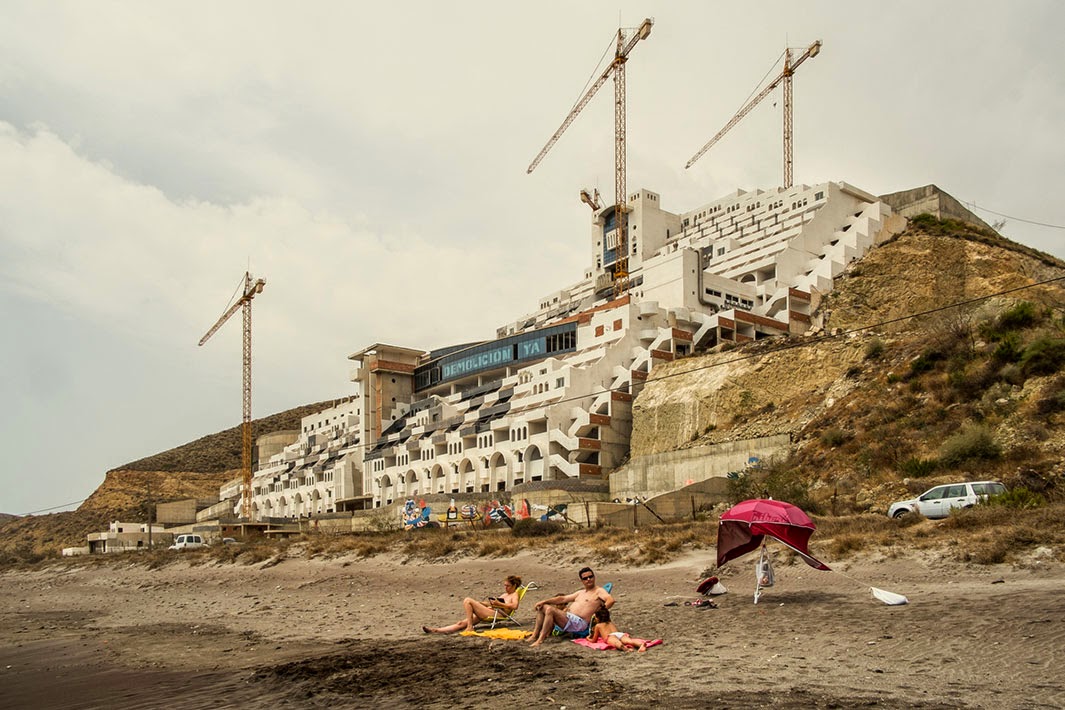 Later: the plot thickens once again, as on Wednesday 6th August, the Junta announces that it has expropriated the land and will knock down the excrescence that is erected on it.

Almería Bombarded by the Germans

An interesting piece of history here recalls the story of how the Germans bombarded the City of Almería on May 31st 1937.
A squadron of Republican bombers, Tupolevs, had flown out of a Murcian air-base some days before and had attacked a German battleship (under, apparently, the idea that it was the Admiral Canaris, a warship used by the Nationalists) which was moored in Ibiza. The ship was in fact a German pocket battleship, the Deutschland, which suffered the loss of over thirty crew-members as a result of the strike. The Deutschland belonged to Nazi Germany, a country which in 1937 was part of a non-aggression coalition but the ship was, nevertheless, trespassing within a ten mile exclusion zone.
Appraised of the incident, Hitler was incandescent and planned to shell Valencia (the provisional capital of the Republicans), however, on reflection, Almería as a smaller target was chosen and another battleship, the Admiral Scheer, was chosen for the job, together with four supporting destroyers, the Albatros, Luchs, Seedler and Leopard.
Over 200 rounds were fired at the undefended port and city. Fifty people died, another 55 were reported wounded and a number of buildings were destroyed. Unlike the attack on Guernica some weeks previously, the German forces made no effort to disguise their nationality, nor to work in any alliance with the Rebels. This was about revenge.
Great Britain and France made small complaint and the event was swept under the carpet. Meanwhile, a large web of tunnels was quickly built under Almería to protect the population from further attacks - enough to protect 35,000 citizens (the tunnels are now a tourist attraction) from the privations of the Nationalist, Italian and German forces. As 150,000 refugees from Málaga, newly taken by the Nationalists, struggled into Almería, adding to the incalculable stress of the situation. The city itself was shelled another fifty times by the Rebel forces in the following months.
Posted by Lenox at 2:26 PM No comments:


The 'Google Tax' was solemnly passed by the Government on Tuesday (without debate). This is a canon that must be paid to a select coterie of daily newspapers when any 'non-significant fragment' of news in aggregated, anywhere within Spain. The AEDE get the money, regardless of who is quoted and linked to, while the evident argument that a link merely adds readership to the site in question has been laid to one side yet again – here in Spain, it's about the power of the lobby, in this case the most powerful news groups – to cause a censorship of the lesser media (and pirate some extra cash). Take Menéame for example (Spain's version of Reddit), who last year provided readers with some 300 million links to original material. The editor says he can either close down... or move abroad. Facebook, Twitter and a whole host of smaller news providers will be affected. For commentators, bloggers and bad English-language gazettes, it will certainly be harder to find the news to share with readers. I suppose they can either make it up, or just pinch it without attribution.
So - will you now be better or worse informed about the news, analysis and events going on in Spain following the implementation of the 'Canon AEDE' otherwise known as the 'Google Tax'? More opinion here and here. A list of the AEDE controlled newspapers here.
Oh my goodness, am I breaking the law?
Posted by Lenox at 8:02 PM No comments:

Ar the airport in Madrid, having got through immigration and customs at warp-speed, I galloped through the giant shop which takes up a serious chunk of the airport, sticking religiously to the narrow grey road that winds through it, while chanting an incantation against faeries, majick and sourcery, to arrive some time later, safely, at the wing which serves the flight to Almería. I had time for a coffee: a decent one, at last (I had been in America, where the coffee is weak and the waitresses are jolly).
The man made me a cortado and I chose a bun. That, he said, would be three euros forty. I waved a five at him, but was told to feed it into a machine, where, in due course, my change would clatter into a convenient tray. 'Look', he said, doing it for me.
So, how do you tip a machine?
'It'll never make it to my pueblo', I told him.
Posted by Lenox at 5:54 PM No comments: