The Dying Villages of Spain

Being on the mailing list of most newspapers and a number of political organisations, Business over Tapas recently received a notice from  la Asociación de Municipios en Defensa del Desarrollo Sostenible y contra la Despoblación about the dying villages of Almería. It seems that a group has been set up to bewail the emptying of the smallest villages in the province (a phenomenon visible throughout Spain) as the young move to the cities in search of fun, a relationship, a job, some excitement and a living wage. In short: the old die off and the young move away. There’s not much point in celebrating the fact that many city-dwellers still have property in those villages, if they aren’t there to participate much beyond a bemused presence in the annual fiesta.
Thanks to modern economics, the public transport to these moribund pueblos is reduced, the banks have closed their branches and the schools are boarded up.
What can we do, ask the Almerian villagers pathetically.
Sometimes an abandoned village gets the hippy treatment – as happened in Fraguas in Guadalajara (Wiki) – where the six starry-eyed ‘repobladores’ are now facing both clink and demolition costs.
Across Spain, the population has grown (slightly) to 46,659,302, an increase of 132,263 souls in a year (thanks, more to immigration than domestic births). Of course, this growth has been unequal across the country, with some provinces – Madrid, Tenerife and the Balearics showing growth and others – such as Zamora, Ciudad Real and Ávila – contracting. An article in El País delves into this subject and notes that one of the reasons for the falling population is those who have moved abroad in search of work.
But as for the small villages – a Google search shows many stories along the lines of ‘a number of municipalities in the province lose inhabitants’ (Jaén here, Málaga here and Navarra here etc...).
A useful study at El Confidencial (from January 2017) is titled ‘Inland Spain remains old and without inhabitants (while the capitals get fat)’. It says that ‘The most affected regions are Galicia, Asturias, Castilla y León, Castilla-La Mancha, Aragón and Extremadura, which in 2013 formed the Forum of Regions with Demographic Challenges’. The Forum asked Central Government for funding back in October 2016 (here) and appears to have quietly disappeared since then.
I wrote back to the Almerian moribund-villages-people, ‘AMCODES’: ‘Hello, if you want to increase the population of your dying villages, and create some wealth and some jobs, think of the retired people from northern Europe. They have money, they are looking for a place to live quietly and it would be an elegant solution to your problem. Perhaps even build a residence for foreigners (there are many bilingual Spanish nurses who want to return from England for example). Care will have to be taken with the Junta de Andalucía and not to get into 'illegal housing', but existing housing can be converted or repaired...’.
Naturally, they didn’t answer me – perhaps they were just looking for some funding.
Posted by Lenox at 5:26 AM No comments:

What Else Can We Tear Down?

The Mojácar Tourist Councillor (and probably future mayor) has come up with a fresh wheeze.
We already have Mojácar pueblo turned into a Disneyville with such attractions as the Night's Longest Kiss, and the Night We Turn some of the Lights Out, and the Rockabilly Night (Mojácar remembers with pleasure the old Swingin' Fifties).
There are indeed more concerts, festivals and attractions in the village to keep even the most miserable souvenir stall-owner grinning through the season.
Mojácar Playa, with those pesky beach-bars soon to be closed down and those wretched teenagers sent packing, will shortly become a hot version of a Butlin's Holiday Camp (where are the Red Jackets when you need one?).
Now it's Old Mojácar's turn.
The venerable old mountain is to be excavated at the invitation of the Town Hall's Emmanuel Agüero together - according to Nova Ciencia - with the Fundación Valparaiso.
I remember Paul Becket, who was an archaeologist and creator of the Fundación Valparaiso, buying Old Mojácar with my Dad precisely to stop the local people from screwing up the venerable (and artificial) hill, which was built in the earliest of times and has been the source of Mojácar's magic ever since.
Mojácar, which comes from Muxacra (the Arab name), which comes in turn from Mons Sacra, the Roman name: the Holy Mount. 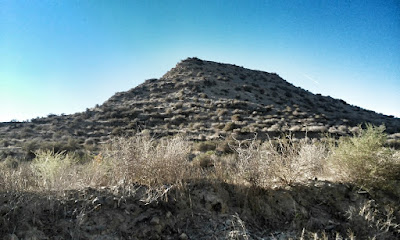 So, what's the plan? Fifty-five volunteers join some archaeologists from the university of Granada from July 2nd to open up the mountain to see what's left (it's been sacked by hundreds of generations of local people). The Town Hall will be sure to organise kiddywinky activities - allow me to quote from Nova Ciencia: '...The children will also be the protagonists in Mojácar (the first Andalusian municipality to be certified as a family tourism destination), as for several days the smallest children will be able to visit and get to know the site, as well as the work of the archaeologists. There will be guided tours, in Spanish and English, talks, activities such as "archaeologist for a day" or "ceramics workshop", being just some of the activities that lovers of culture and archaeology can enjoy in Mojácar throughout the month of July...'.
The Town Hall has sent out a press notice which more or less quotes the article from the Nova Ciencia, but adds (to rub in the tourist angle) '...Mojácar, one of the "Most Beautiful Villages in the World", will be adding to its many attractions as a tourist destination the opportunity of an archaeological visit to what will surely become one of the most interesting sites in the province of Alméria...'.

Mojácar is a cute little town, down there at the far end of the rainbow. It’s a mess of narrow streets and white cube houses perched majestically on the final hill of a chain that marches down from the High Sierras. It is home to poets and drunken artists and, thanks to the recent efforts of the Tourist Office, hosts teeming millions of visitors attracted by the old and lost bohemia of the hippy days.
Mojácar is a little-bit second rate. It was rebuilt, practically from scratch, in the late fifties after the population had reached its lowest ebb of around 600 souls.  Before, it had been a player: a Neanderthal settlement, then it was controlled by the Phoenicians, then the Romans and later the Visigoths (whatever happened to them?), then at last it became part of the great Moorish diaspora of the eighth to the fifteenth century. The heavily fortified city surrendered to the Christian forces in 1488 (probably a bad idea, but History was against them). Repopulated with folk from Lorca, Mojácar remained a loyal Spanish city which slowly, over the centuries, became an irrelevance.
As late as 1920, there was around 6,000 people living in the town, but a drop in the water table, the rise of the Mad Generalísimo and, of all things, a surprise devastation of the orchards by a wall of locusts persuaded most of the remaining locals to sell up their homes and head off for Barcelona, France, Germany or even Argentina.
The problem was, there was no one buying. Even the Brits didn’t want a house in Mojácar in the nineteen thirties. The only thing to be done was to demolish the family abode and sell the beams, the lintels and the rejas for whatever the market would bear.
The result was that, by 1950, the town was a huge pile of rubble. Even the streets themselves were lost in some cases. A clever mayor in the early sixties fixed this by offering ruined houses to any who would take them – free of charge, but the deal was one had to rebuild them. Mojácar became a secretive bohemian capital. It was glorious. 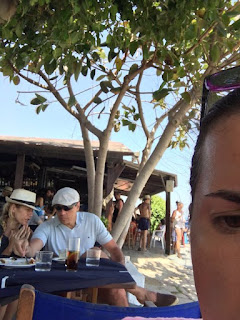 Now, things were on the mend. We discovered that Walt Disney was really born here (despite an alarming lack of any proof whatsoever). The FBI apparently came here in 1953 and asked the priest, ‘say, you ever here of a guy called, lemme see, Walt Disney? We think he was born here, but don’t tell anyone because it’s a secret, see?’ Sadly, the church records had been destroyed during the Civil War, and there were no Disneys to be found. The legions of dismayed souvenir shop owners do what they can, but their hearts aren’t really into selling Minnie Mouse.
Anyhow, this fable kept our peckers up for a while, but now we can say that we have a real live hero living amongst us. Pedro Sánchez, the handsome new president of Spain, owns an apartment in the village. You sometimes see him wandering about with a cap pulled low on his head, followed by people with their mobile phones, earnestly attempting to take selfies.
So, all’s well that ends well. Mojácar could become a winner after all.
Posted by Lenox at 10:31 AM No comments:

They Took Away Our Rights 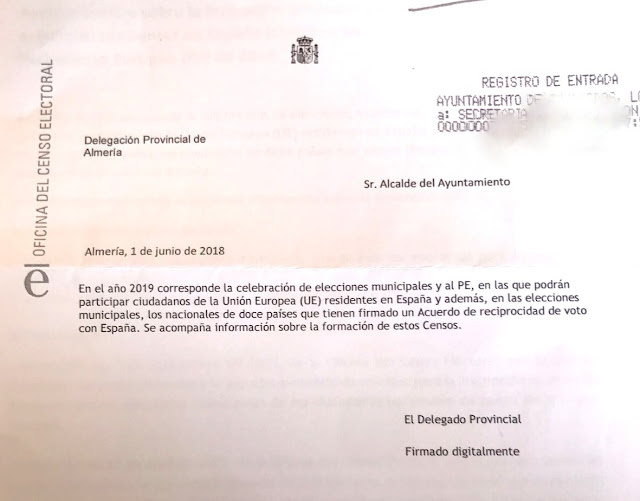 Here is the letter from the Election Office to the Town Hall. It says that in 2019, there will be municipal elections and European elections both. Citizens of the European Union who are resident in Spain may participate and furthermore, in the municipal elections, nationals of the twelve countries who have a bilateral reciprocal-voting agreement with Spain.
In Mojácar, a recent push by the Town Hall asked, In English, all residents to be sure to be registered on the padrón, yet the notice failed to tell them that they should register as well to vote.
Because, it would appear, the British (the majority of our foreign residents) will not be able to vote.
Even if there was a bilateral arrangement with the UK, which became legal after Brexit (March 2019), there would not be time to add those residents onto the Electoral Roll, as this formality takes six months and the next elections will be in May 2019, just two months after Brexit.
Please do not think that the Spanish authorities would somehow make an exception for the British residents. They won't.
It would also be the case that the British residents would not be able to stand for office. In Almería there are several British councillors (among others, Mojácar has Jessica Simpson, Bédar has Marian Simpson and Zurgena has Jim Simpson - not in any way related). Meanwhile, the Irish councillor for Albox, Maura Hillen, resigned this week in protest at the PSOE's intransigence in 'regularising' the huge crop of 'illegal homes' which, for some funny reason, only the British seem to own here...
Indeed, other European candidates that might create or join political lists would find their weight considerably lessened if the British residents lost their suffrage - the mayor of Alcaucín for example is a Belgian.  It seems unlikely he attained office purely thanks to the local Flemish vote.
If the local town hall doesn't take much notice of us when we can vote - it certainly won't take any notice if we can't!
What to do?
The British consul is holding a meeting in Mojácar later this month to tell us either of our reduced rights as future non-Europeans, or more likely to tell us that everything is just fine, don't worry and wave your flag brightly, By Gum.
In Mojácar we are just a couple of thousand (and many of these are either pro-Brexit or don't care who runs their town hall). In Spain, we British residents number, officially, 240,934 (and - to make the point - that's more than the entire population of the City of Granada!).
As we are cynically dropped into the dustbin by the politicians in London, Brussels and Madrid, maybe we could hold our own Parallel Election, with Ghost Candidates for an Alternate Town Hall and  a Guiri Headman.
And Morris Dancers too.
Anyone in?