What do they say – something about ‘democracy being the best of a bad bunch’. Certainly in the USA, where the Republicans spend twenty times as much as the Democrats – who spend thousands of times more than the – oh, I don’t know – the American Socialists or something, in the USA, some joker like George Bush jr can win. I always think, when the talk turns to ‘democracy’, that the Americans are somehow pulling our legs, but I haven’t quite figured out how.
The money, of course. Here in our local elections, some parties apparently spent quite heavily to try for better results. One pueblo party sent an agent to South America where some fifteen per cent of the entire vote of that town happens to live. In fact, those ‘postal voters’ – people inscribed on the local town hall registry, but actually grandsons and daughters of those who left Spain after the Civil War – are considered key voters in certain local elections. Marvelous, isn’t it. These addresses are only (officially) released to the parties when it is way too late to send out campaign material, but – some people already had those details on file…
There is little doubt that a few years in public office can do wonders for one’s career and this is true the world over. Without any form of corruption, there are still many advantages available to the intelligent councilor.
As certain non-residents over there in Argentina were taking a bank-note out of an envelope and replacing it with their vote, other residents, nearer to home, were being denied their own rights. On Election Day, I was at the polling station wearing my Party-Badge and a few people came to me to say that they wanted to vote but were surprised to find that their names were not on the lists. I can only imagine that other people would have gone to other party representatives with similar complaints. It may just have been a few people involved and a few bits of paper mislaid, I charitably presume, although I later heard that in the Alicante town of Altea, the founder of Ciudadanos Europeos, Per Svensson, was unable to vote. How about those apples?
Even the stoutest defender of pueblo democracy would concede that there was some small manipulation or gerrymandering of votes in certain cases – with troublemakers or critics occasionally – whoops! - removed. In some parts of Almería, the ‘Europeans’ found that their names had been lovingly added to the 2011 elections, where, no doubt, they will one day make a difference.
I have met a few people who were offered money for their vote. One Spanish shop-keeper told me she had been offered 300 euros by the brother of one candidate and a similar amount by the friend of another.
One candidate in my town’s elections is said to have spent over a hundred and fifty thousand euros on his campaign, without obtaining a seat on the council. I personally think his candidacy was nothing more than a ‘red-herring’ to split the ‘foreign vote’. On the positive side, two foreigners are now in local government, Jim Simpson in Zurgena with the Partido Andalucista and Albert Shröter from the PP in Mojácar.
In another town nearby, the postal votes were apparently tampered with. All of the envelopes had been steamed open and the votes that were for other parties thrown into the trash – where they were later found. Judge’s decision: no action to be taken.
Back in my town, 75% of the Spaniards voted, where sadly only 40% of the registered ‘Europeans’ bothered to do so. Under European law, those citizens that had the nerve to have been born anywhere else in the world, like the USA, Ecuador or Argentina etc, of course couldn’t vote in our local elections. Let that be a lesson to them!
There were many reasons why our noble democratic process came under stress; but in the end, even though the route taken was not entirely the one recommended by those ancient Athenians who first put the idea into practice, the system worked and we got ourselves some new and evidently intelligent leaders.
Posted by Lenox at 7:17 PM 1 comment: 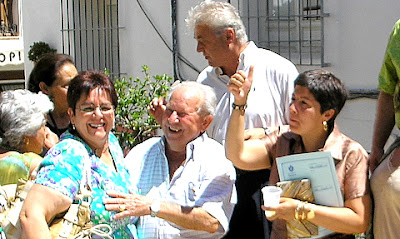 The new mayoress of Mojácar, Rosa María Cano, took office today. She has the support of her party, five councillors, plus three more from Ciudadanos Europeos, GIAL and AIz. In the photo, Rosmari raises her thumb in approval to her supporters. Standing behind (and towering over), is Albert, the first democratically chosen foreign councillor in Mojácar. Albert will be in charge of Mojácar's image. 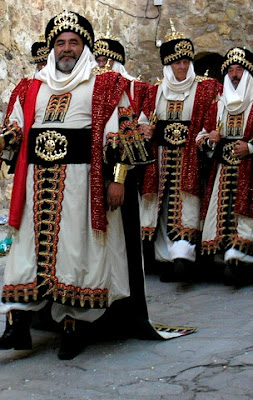 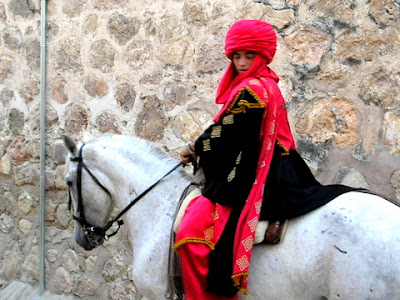 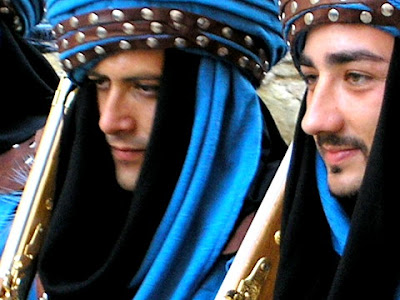 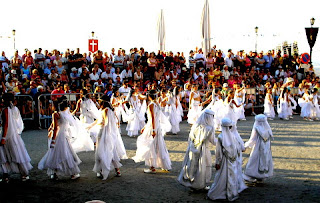 The Sunday procession, where the multitudes of brightly costumed celebrants make their final farewell. 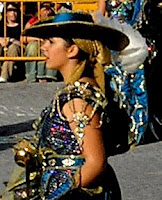 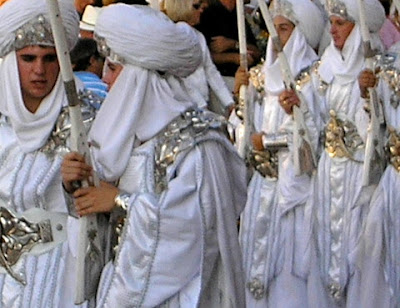 Moors and Christians - the first night 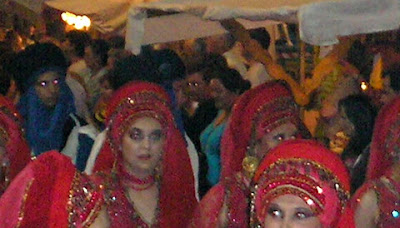 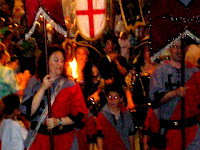 The Moors and Christians celebrate the story of Mojácar's defeat in 1498 and how the two sides managed to turn the event into a companiable 'draw'.
There will be a medieval market in the Plaza Nueva with animations, falconry, snake charmers and the odd firework.

Friday 8th June. The event starts in the pueblo at around 6.30pm, with the troops arriving (noisily) at the fountain at 10.30pm and from there up to the pueblo, where the opening of the celebrations is officially proclaimed. The six troops ('Kabilas') will then withdraw, around midnight, to their various 'barracks' about the town where great toasts are drunk, great noise is blasted about and festive bands of musicians join in the aimiable bedlam.

Saturday, 9th June. 6.30pm. Moorish troops land on the Playa de Descargador (opposite the Provenzal Hotel) with the merry explosions of blunderbusses. There will be 'a hawking show' (hopefully involving wild birds of prey) and a belly dancing show. A medieval tournament will be staged. Then, accompanied by some really heavy fireworks and explosions, the deafened armies will march towards the Parque Comercial. From 10.00pm, the barracks will once again be opened where great amounts of cheap liquor will be quaffed etc.

Sunday 10th June. From midday, a truly cacophanous number of blunderbuss discharges will be held on the beach as the two armies meet. The main parade - quite unmissable - will take place from the Plaza Nueva in the pueblo, going down the road to the fuente below, from 7.00pm.
Posted by Lenox at 2:46 PM No comments: