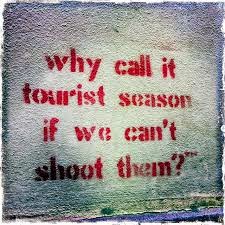 With the build-up to the local elections of Sunday May 24th, we shall be hearing ever more about how 'tourism is our only industry' and how we must plan our town for the benefit of our visitors.
Very nice. Why do we actually want tourists though? It's in the quote, 'it's our only industry'. You see, we don't particularly want tourists, they slow everything down, get in the way, cause queues, caravanas, empty the shelves; they are noisy, belligerent, they throw up in our gardens and they crash merrily into our cars. They don't respect our quaint customs and often don't bother to dress when they go to the supermarket. Next year, they'll chose Corfu instead. The fact is, of course, that we don't want or like tourists at all: it's their money we like.
So, we have parades, concerts, rubber castles, fiestas, endless shows in the village square and an expensive tourist department (where the councillor is, for some reason, monolingual in Spanish). All paid for by the local residents so that we can have lots and lots of tourists. In the summertime, anyway. There's a great quote in this week's Business over Tapas that comes from a company in Mallorca called NT Incoming, 'one Russian tourist is worth five British ones', they say. Heh. They don't mean - I think - that our sock and sandal society is five times harder to bear than that of a Cossack, but rather that the Rooskies spend more dosh while holidaying in the Balears.
Those of us who have shops want tourists, but the shop-owners are only interested in those who come through their doors and buy stuff. Which in Mojácar, means tee shirts, leather bracelets and cheap Chinese-made nick nacks. No one who lives here buys this junk, it's for the tourists; cheap tourists evidently (no swanky American-Express-carrying Russians in the Hotel Best or its charming sister the Second Best). If you don't own a shop - and of course there are many, many families who do - then you don't have an abiding interest in seeing tourists take the last parking space outside the Parque Comercial. Now, those families with shops like tourists, under certain conditions already outlined, so they will support a political party, especially one run like a pirate ship by a close family member. The rest of us will merely wonder why the place looks like Disneyworld in the summer months and Disneyworld After It's Shut for the rest of the year.
Residents buy a house, they buy a car, a washing machine (or several if they choose López). They pay local taxes. They bring in money every month from outside. They love their home, their street and their town and want to see it pretty, not covered in sick. A calculation says that a resident spends the same in one year as 500 visitors to our town. Remember, the hotels are as cheap as they can be, with the food prepared in Málaga, with cheap foreign labour cleaning the rooms and scrubbing the floors (so, no jobs for the local there). Our tourist office spends its time and our money pandering to this kind of cheap tourism (remember the Hotel Moresco, closed for eight years now and owing 165,000€ in IBI) and, remarkably, forgets the one hotel open all year, full all year, and with wealthy patrons (who naturally wouldn't buy many tee shirts): The Parador.
Those foreign-born residents who live here all year round, enthusiastic settlers, are served by one English-speaking local woman in the Town Hall. That's their lot. There's no 'Foreigners Department' manned with fellow-Brits to help them get through the paperwork, or advise them of their rights and obligations. There's no alternative to clambering up the steep hill to the village ayuntamiento (strategically located as far away from any parking as is possible), to see if they have had their names taken off the padrón, or if there's something about them on the tablón de anuncios. There's no European Day or Foreigners Day or, despite being more than 60% of the entire community, there's no one from the foreigners with a job in the swollen town hall, where those locals who don't sell saucy tee shirts seem to end up.
Hotels are ugly things and they only last for so long. They might be converted into apartments eventually (like the old Hotel Mojácar), or left to rot like the Moresco. They may be built by speculators but never opened (the Hotel Chamberrí in Marina de la Torre or the ghastly hulk in Playa Macenas), or their permissions might be unkindly withdrawn (Hotel La Mata). Their owners are usually murky businessmen from Catalonia, plotting from afar to close down local apartment rentals.
Why should our politicians crow about tourism being our business? It's not: it's theirs!
Posted by Lenox at 9:25 AM 4 comments:

I was asking the mayor of the small town where I was staying in Oklahoma about planning permits. Specifically I said, to build on a piece of land outside city limits. 'Well, there are three types of building; housing, commercial and industrial. For housing, building a place on your own land, there are no requirements at all'. You just build... whatever you like. No one comes from Washington with papers and judges and bulldozers, no one from Oklahoma City tries to interfere in local planning.
Public official are there - and this is a novel idea - to help rather than to obfuscate as they must in Spain.
The town where I was staying - I'd been to visit two of my kids over Thanksgiving - is growing. There is no limit imposed by the regional or state capital about growth. It's simply supply and demand.
The mayor works for the interest of his community. He is helped by an official called a Town Administrator, a professional who knows the rules and regs. Such as they are.
Paperwork is minimal in Oklahoma. Your 'title' to your car, for example, you can keep in the glove-box, or at home. You can sell your car, transfer title, just by giving the buyer the paper, a bit like how in works in a game of Monopoly. You then go to the local registry (there's one in every town, not like booking a visit with Tráfico and then trailing into the City for an entire morning). Simple. The transfer fee is 25 dollars. For that matter, a driving licence, obtainable in a morning from scratch, is 25 dollars!
Sales tax is low at 9% in that town, as compared with the flat 21% enjoyed across Spain. 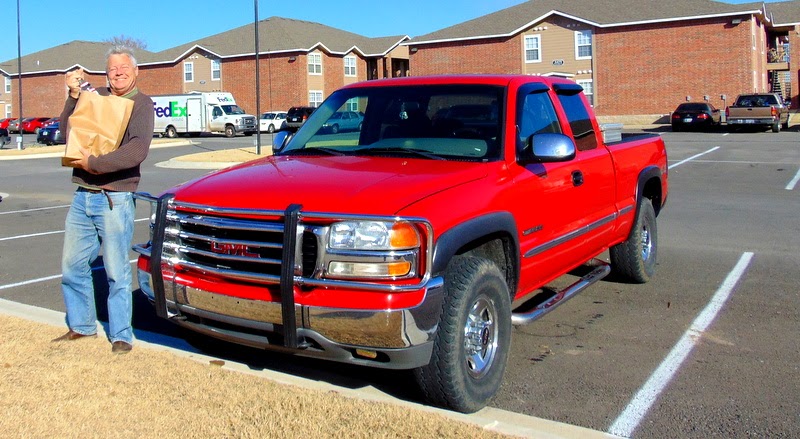 Parking is easy in Oklahoma. There's room because there's planning. Planning because it makes sense to have parking spaces for clients or visitors. It's a practical society.
Walking around the town, I saw signs in many shop windows looking for staff. 'If you don't have a job here', I was told, 'it's because you don't want one'.
Yes, there's more room than we have here in Almería; but looking out of the window of the airplane as I flew in to our airport, I saw a lot of empty space... We have an unemployment of 36%, a black economy of 31% and a kleptocracy for a government. If it wasn't for the guns, I'd prefer Oklahoma...
Posted by Lenox at 9:01 AM 1 comment:

Another One Bites the Dust (Heh!)

Following on from a recent post in The Entertainer Online...