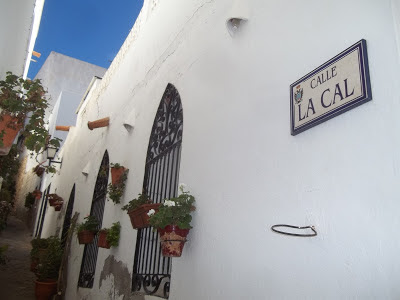 This is a narrow street in Mojácar called - at least for thirty years or so - Callejón de Pedro Barato, now clearly renamed as the more prosaic Calle La Cal. It was christened 'Pedro Barato' by Cheap Pete, an American who lived here during the seventies and built El Palacio, the building in the picture to the right, which Pete opened as a restaurant.
It's a fact of life here in Mojácar, a town whose every vestige and sign of wealth comes from the legions of foreigners who have settled here since the sixties, when the town was little more than a mass of attractive rubble, that the swollen guiri population (now over sixty percent) must be treated as forgotten second-class citizens, whose only function is to pay their taxes. Unlike many towns in similar circumstances on the Costa del Sol or Costa Blanca, there is no 'Foreign Department' in the Mojácar Town Hall, much less one staffed by foreigners. In fact, although there are over 150 funcionarios in the Town Hall in a town of around 8,000 inhabitants, none of them are British.
The politics of the town is to look for cheap brief-stay tourism (there isn't any at this time of year), trying to pack badly designed and ugly hotels located on the far end of the beach, hotels that bring no business to the larger community. At the same time, ignoring residential tourism, which brings in large amounts of money all year long - as more enlightened towns like Marbella, Mijas, Fuengirola, Altea and so on are perfectly well aware.
The foreigners in Mojácar are getting squeezed and many wish to leave. It's understandably hard to sell their homes as there is no demand (because the town businesses are only concerned with tourism, and are generally shut during the winter, leaving the town with little or no social cohesion). At the same time, massive and eagerly raised rents on properties held by sly locals are keeping many shops, bars and restaurants closed... sometimes all year round.
One day though, we shall all be gone and, like Cheap Pete before us, we shall be removed from the history books and forgotten. 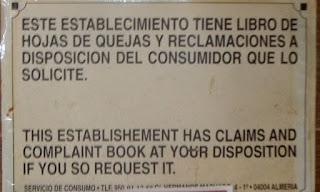 The Almería Better Business Bureau (which takes a few euros out of your taxes if you are self-employed) is - and one can only suppose this - meant to drum up business. One of its jobs is to provide a poster which compliments the well-feared 'complaints book'. Two or three complaints from the public and you can be up for a nasty fine. For years, the poster (forget the syntax and wonderful translation) had a spelling mistake, which was the word 'establishement'. As all long-time foreigners know, Spanish institutions never employ or ask a native-speaker to check their prose, and far less these days with the google-translator, although I suspect that, in this case, they've kept it artesanal.
So, it was nice to see that they finally fixed the problem. Oh, wait. 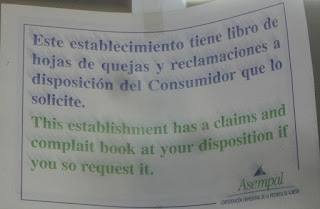 How Do You Stop This Thing? 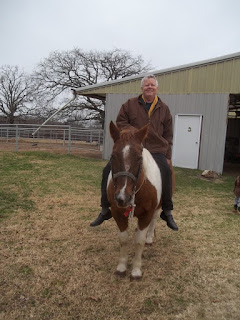 We had our first holiday in quite a long time, two weeks in the American Midwest over Christmas and the New Year. Unlike most everything else - from the cars to the portions of food - the horses there are smaller, which I think is just as well.
Leaving the sanctity of the office in our home in Southern Spain, where I spend so many hours fiddling about on the home computer, writing up stories that attract my attention, translating texts, preparing and finessing a new weekly summary of Spanish finance politics and housing issues for foreign property owners (Business over Tapas) and otherwise misusing my time with the keyboard, it was good to change gears and, thanks to the kindness of my American hosts, drive an automatic for a change.
I suppose as we get older we get stuck in our various ruts: comfortable with our own opinions, thoughts and prejudices.
There was the story that Old Tuborg once told me.  'I lived all my life in Ceylon. They filmed the Bridge over the River Kwai on my land and I wouldn't let them blow it up until they'd paid me the money for building the damn thing for them. The people there are nice, but odd. Every day I would have a boiled egg for breakfast. Then one day, my servant bought me a fried egg and put it in front of me. For forty years, I said to him, you have brought me a boiled egg every morning at 8.00. Why have you now suddenly brought me a fried egg? I thought you liked them, he said. I had to let him go after that'.
Living in Spain is fun and sometimes challenging. It's worth spending as much time as you can mixing in with Spanish culture, language, history, food, people, society and places.
That means, for me, getting off my backside and making every day different from the last. I never liked boiled eggs anyway.
Posted by Lenox at 4:35 AM No comments: