I found my first driving-licence the other day, in a box in the room that passes for an attic in our house with a flat roof. It was green and came from Nevada. I had bought it off a fellow called Fat Freddy for 100 pesetas when I was 14. The great thing about Nevada driving licences in those far-off days was that they didn’t have a photograph (as didn’t the Belgian ones apparently). All one needed for the driving licence to be an unqualified success was a typewriter and a steady hand.

My next one, four years later and now eighteen, I got from our local city of Huercal Overa. Don’t worry – despite its odd-sounding name, it’s in Almería.

To earn the licence (sixty pesetas plus driving school), I had to go through the tedious formality of learning to drive. My dad had a Renault 4 furnished with that interesting push-pull Gallic gear-stick and in this I took my first lessons. Sammy, a very camp bartender, was delegated to give me classes, or rather, tips on driving. But first, I had to teach him how the gear-lever worked. If you don’t know it, it’s a bit like stirring a bowl of lumpy soup with an umbrella.

Sammy taught me that, if it looks like you are going to crash into someone, then accelerate. That way, you’ll hit them harder that they’ll hit you.

Following these basics, I then went to driving school with a fellow called Casanova. He wasn’t such a big hit as his namesake (at least, in Sammy’s opinion), but at least he kept his hands to himself. I was now practicing with a Seat 600, which is about the size of a loose-fitting suit. 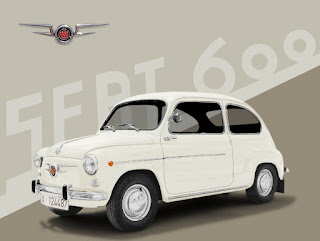 A line was penciled in under the rear right window, used for reversing into a parking space. One simply had to turn the wheel sharply after passing the bumper of what would be the car in front.

I’ve always tended to park about a metre away from the verge thanks to this piece of basic training.

After studying the book they sell you and taking notes, and following a thumbs up from Casanova himself, the great day for the test arrived. Two elderly nuns and I were called to take turns to navigate the streets of Huercal Overa.

I was told that I could take the written test in English, which I did. They then said that there was a small problem, as they didn’t have the answers, and could I now take it in Spanish. I think the embarrassment may have helped them to allow me to pass on my first attempt. The two nuns? Failed dismally, poor things.

I’ve given a few lessons myself. A couple of years ago, in an old Mercedes driving though the river-bed, to three deaf friends of my daughter. My sign-language is still at a spelling-out-a-word stage, so telling them to S-T-O-P was a laborious affair indeed.

My most recent classes were to teach my Spanish step-son, who was flunking at school in English. I thought, as we raced around the parking lot, I’ll just speak to him in English while we do this. Remembering Sammy, I taught him the two ways to stop: (‘press the brake firmly, or head for the nearest tree’) and reminded him of the one cardinal rule in driving in Spain:

Everyone else on the road is a complete idiot.