Whatever Happened to The Schrödingers?

I suppose we all know where we stand when we come from the same village. We went to school together, grew up together, had the same football team, priest and accent. We slept with each others sisters (or attempted to) and then, By Gum, we married 'em.

As we got older we worked the fields together, or opened a bar, or tearfully waved our hankies as one of us went off to Germany to seek his fortune. We bought a television and laughed at the same show; we got older still, sold an old farmhouse to an English family; and finally we died. Our companions went to the mass to see us off and that was that. If somebody remembers to pay for it, there'll be a photograph of us with our donkey or maybe our taxi glued to the funeral stone in the cemetery.

Now, the extranjeros of course are different. We all came from somewhere else and mostly never knew anyone before we met up here. We could even, if we wished, rewrite bits of our past - not that any true expat would ever ask, or at least, listen to our story. There can, after all, be only so-many generals on the retired list.

We are older, too. If the average villager is 37, then we are some twenty years their senior, and with poor dietary decisions and too much booze, we will quickly shoot to the top of the queue on the village Sick List.

The cemetery that serves the village where I live, in a country not my own, is full of fellow Brits. Some of them have bits of English-as-she-is-wrote on the stones, things like 'My Hisband Bernie' and 'We Shall Met Again'. It doesn't matter so much, until you find that they've carved the marble to remember 'Brian' for eternity as 'Brain'.

One thing though, we know what happened to the villagers, as well as to Bernie, Brain and the rest of us. All except for those who, for one reason or another, disappeared out of our routines. Some were the life and soul of the party, then abruptly went back to Where-ever-it-was that they came from, leaving behind them little more than some memories and a modest bar-bill. Somebody else, of course, quickly took their place. 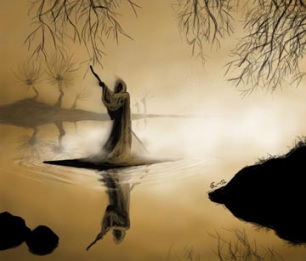 And we wondered, as we went through the old photographs, what ever happened to Bertha and John, or Gitte, or the drunken Mrs Porridge?

I suppose that it has become easier, in certain cases, with social media - I learned today of one poor chap who spent time here in our village in Spain and died this weekend in London of some horrible disease. But what of Erna who was a dancer and could still do the splits at eighty? She had come to us 'in her liddle car', because she said, she was heading for Austria but couldn't find the reverse gear. Some family was eventually dispatched from Copenhagen to take her home. But then what became of her...?

The question is this: can you mourn someone when you don't know if they are dead?

Now and again, a box arrives with the ashes of someone, who, last time you saw them, was singing something blue in the café down past the bank. He'd gone back to his country (he never did trust foreign doctors), no doubt was attended to by a doctor with a suspicious accent in his own national health service, and - well, the long and short of it - he wanted his ashes to be scattered in Spain. Anyway, the customs have him now and I wonder - does anyone have a spare fifty euros?